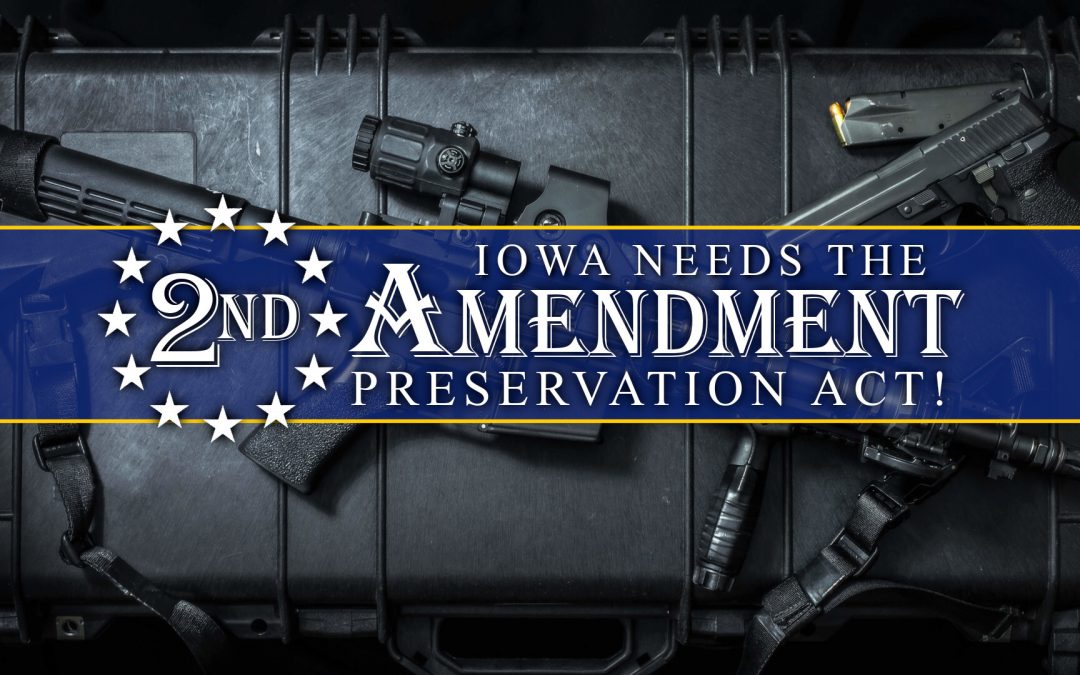 With our years-long fight to pass Constitutional Carry officially in the rear-view mirror now that the law is in full effect, the fight for freedom has already moved on to the Second Amendment Preservation Act.

The Second Amendment Preservation Act (SAPA for short) is exploding in ‘red’ states across the country, as it’s the only sure way of defanging Joe Biden’s war against gun owners.

In fact, our sister organization in Missouri just enacted this legislation into law, the strongest SAPA law in the nation. To read more about that, go here.

So Joe Biden can pass whatever gun control he wants in Congress –assuming he can ever find the votes — but Iowa’s peace officers would be barred from helping to enforce them.

The idea of states asserting their authority and refusing to assist with the enforcement of overreaching federal laws is not a new idea. It’s called the anti-commandeering doctrine, and the U.S. Supreme Court has upheld the states’ right to ignore federal laws repeatedly!

And you don’t have to take my word for any of this.

Just look at the varying ways that states interact with the federal government when it comes to federal laws regarding marijuana or sanctuary cities for illegal aliens. The states clearly have the final say on federal laws that they choose to enforce.

But SAPA is only worth it if it has teeth, otherwise liberal police departments in Iowa towns big and small will simply ignore the law and treat it like a suggestion.

That’s why the legislation that we’ve had filed in Des Moines allows individual gun owners to sue police departments that violate SAPA law in civil court! And at $50,000 per violation, this will serve as a massive deterrent to any department heads who are thinking about enforcing federal gun control laws!

But gun owners have to push hard, and make it clear to the politicians in Des Moines that we won’t accept any compromises on this legislation.

We can’t fall for a legislative ‘resolution.’ Those are throw away lines that allow a politician to talk tough, without having to do anything tough. It’s a policy statement, not a law with teeth.

And we can’t fall for SAPA law that leaves the enforcement of SAPA law up to the Attorney General or even Governor Reynolds. Obviously Tom Miller would do nothing to help gun owners, and while the Governor might, we need a more reliable solution.

Iowa Gun Owners is already meeting with our legislative allies to make adjustments to the legislation that we had filed last session, as we work to create as much heat as possible behind this legislation before the next session begins.

Your signed petition is part of this process, so please sign yours right away.

After your petition has been signed, you’ll be taken to a confirmation page and given the option to make a donation to help us build pressure for this legislation.

Please donate! We need to crank up the heat for this legislation via digital and radio ads, just like we did in our successful fight for Constitutional Carry.

P.S. Constitutional Carry is now the law here in Iowa. But with Joe Biden in the White House, we can’t pause for a second in our fight to pass the Second Amendment Preservation Act!

But the politicians in Des Moines will not pass this legislation voluntarily. We need to crank up the heat! So please make a generous donation NOW to help us fight!