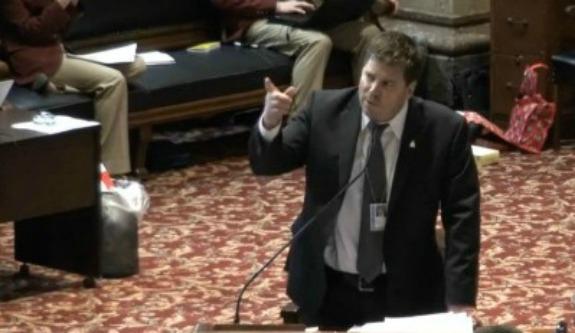 (This is the conclusion of the 2015 session wrap-up email series from Iowa Gun Owners. If you missed part one or two, you can find them here and here.)

And so we urged you to call and email your legislators to oppose this bill – as it created a list of permit holders in Iowa!

We knew that some would be angry for this decision, especially since there were so many pro-gun features to this gun control bill. But gun owners need to oppose the creation of a database at all costs.

In fact, if Gronstal and Sodders offered us a deal like this, the creation of a database in exchange for Stand-Your-Ground legislation, we’d never support it.

Such a short-term gain, the price of which will be paid for by our children or grandchildren, no thanks.

Instead, we’ll continue to expose anti-gunners like Steve Sodders, Mike Gronstal, and Mary Jo Wilhelm at election time – with everything we’ve got.

This is what anti-gunners in Des Moines fear the most: being exposed for who they are at election time in their districts when they can’t run away and hide in a cozy nightclub near the Capitol.

They were desperate to establish political cover this year, so they could wrap themselves in it as they face educated and mobilized gun owners next year.

You stopped that from happening.

While Sodders and Gronstal stopped Stand-Your-Ground law from becoming law this year – by just two votes – they are going to have to answer for that, as will all the other members of their caucus.

And let me tell you, there are a bunch of nervous members in the Democratic caucus who are terrified about their next re-election in light of what happened this year.

No doubt they’ll try to pass something next year. We’ll wait to see what it is.

But understand this, the ONLY reason that any gun bills are being pushed right now at all is because of the mobilization of Iowa Gun Owners – because of you.

In the past, gun-grabbers like Sodders and Gronstal could simply crush gun bills and almost no one would find out.

Certainly no organization would be activating gun owners in their legislative districts come election time! After all, that takes commitment, long-term planning, and the resources to pull it off.

And if a group ever threatened to do this, a little back-room dealing in the Senate lobbyist lounge would snowball them into supporting whatever compromised ‘legislative bone’ the legislators would offer up would be more than sufficient to quiet them down.

But those days are long gone here in Iowa.

Anti-gun legislators are losing their re-election efforts by the dozens over the last few years and will continue to do so as long as Iowa Gun Owners’ members and supporters remain engaged in this fight.

Iowa Gun Owners will not back down – nor will we settle for a little scrap of gun rights only to then have to praise candidates who are anti-gun 99% of the time.

Senators like Steve Sodders and his ilk can kill pro-gun legislation during session – but we WILL hold him and his colleagues accountable for it just like we’ve done in the past. 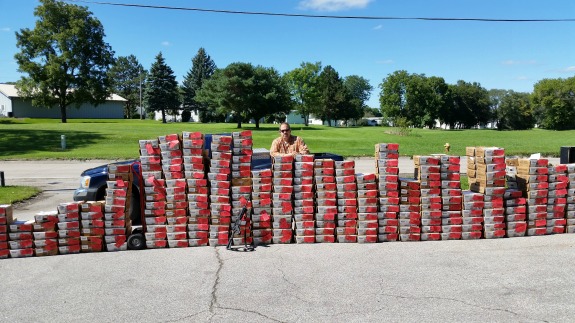 (IGO’s Aaron Dorr stands behind just a portion of the direct mail that Iowa Gun Owners members and supporters made possible last year – wave after wave of this hard-hitting mail was deployed into targeted legislative races around Iowa, exposing anti-gun legislators.)

These legislators would do well to remember their former colleagues like former State Senators William Heckroth, Staci Appel, Becky Schmitz, Keith Kreiman, and Daryl Beall – all of whom lost their re-elections over the last few election cycles when gun owners were informed about their anti-gun voting record by Iowa Gun Owners.

This does not count the dozens of anti-gun candidates seeking office for the first time that we’ve exposed – ending their careers before they even began!

Thanks to the supporters of Iowa Gun Owners, we have a long history of seeing smug anti-gun legislators being removed from office and replaced by educated voters who make informed choices.

This is how politics works.

So if you’re mad that Stand-Your-Ground law was not enacted this year – we hear you!

If you’re mad that the pro-gun portions of the catch-all bill didn’t pass – we hear you!

Remember how this feels next year, when Iowa Gun Owners asks for your time to go house-to-house in targeted neighborhoods, and your money so that we can run the election program that has been so successful over the past couple of election cycles.

In the meantime, we want to recognize and thank pro-gun champion Senator Rick Bertrand for his tireless efforts during the 2015 session on behalf of gun owners.

No one in the legislature worked harder this year to see gun rights advanced than Rick.

Whether it was being available for an IGO video, making time for a media interview about our bill with 2 minutes notice, helping to secure cosponsors on this bill, or anything else that gun owners asked of him this year – Senator Bertrand stood tall! 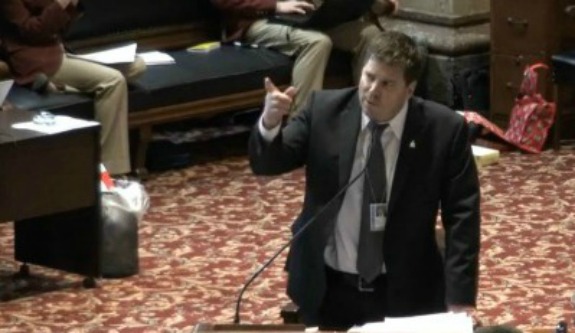 (Pro-gun champion Rick Bertrand blasting the Senate Leadership during the 2015 session for blocking the advancement of Stand-Your-Ground law.)

And, of course, we’d like to thank all of you: the grassroots army of gun owners that makes Iowa Gun Owners possible.

Your calls and your emails are the reason why anything happens in Des Moines!

And your generous donations are what give us the ability to launch the radio ads, deploy targeted direct mail, send out tens of thousands of emails and get the pressure on in Des Moines.

You are the reason that any gun bills are gaining traction in Des Moines.

You are the reason that gun-grabbers like Sodders and Gronstal are afraid.

And you are the reason that so many anti-gunners here in Iowa have been booted out of office!

We will continue to fight for you.

And, no matter what, we will continue to expose anti-gunners during both the legislative season and the election season.

For the rest of the year, Iowa Gun Owners will be very involved in providing you accurate information on the candidates seeking gun owners’ support in their bid for the GOP and Democratic nomination to run for President.

Already, last week, we confronted and exposed radical anti-gunners Lindsey Graham over his awful record and $250,000 payout from Michael Bloomberg.

We will continue to examine and highlight these records.

Thank you, again, for all of your activism and support during the lengthy 2015 legislative session.