Will the Iowa State Fair be the next “gun-free zone” mass-murder target?

Will the Iowa State Fair be the next “gun-free zone” mass-murder target? 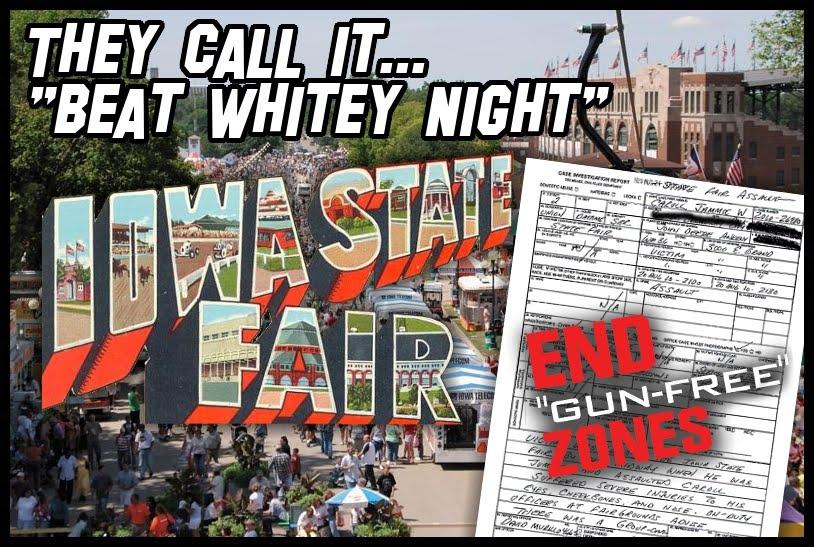 They called it “Beat Whitey Night” at the Iowa State Fair.

Multiple fairgoers found themselves victims of horrific beatings and stabbings.

But 36 year-old Jammie Carroll may have had it the worst.

He ran into the mob as he left the Fair looking for his car, but Jammie left in an ambulance as he was beaten near to death by the bloodthirsty criminals.

Honestly, it could have been worse. Much worse — thanks to the State Fair’s outrageous “Gun Free Zone” policy, which leaves all fairgoers unable to defend themselves against criminal attack.

But the bad news is, unless you and I STOP the gun-grabbers’ all-out march to throw up so-called “Gun Free Zone” signs all over Iowa, I’m afraid it’s only a matter of time until innocent Iowa citizens pay the price in blood.

That’s why I’m counting on you to sign the petition to your State Representative and State Senator TODAY. More on that below.

As you’ll see, these petitions urge your elected officials to FIGHT “Gun Free Zones” across Iowa — including at the Iowa State Fair.

The truth is, there is nothing violent criminals HATE more than running into a potential “victim” who is carrying a gun.

After all, thieves, murderers and rapists all know attacking someone armed with a loaded firearm often results in early “retirement!”

But the anti-gun crowd doesn’t believe the answer to solving our crime problem is to ensure law-abiding citizens can defend themselves from assault.

They think the answer is to throw up even more so-called “Gun Free Zones” — or more appropriately named — Criminal Safety Zones!

And right now, the gun-grabbers are doing exactly that all across Iowa.

The good news is, Iowa Gun Owners has already stopped these schemes in George, Nevada, West Chester, Burlington, Dubuque (twice), and Tama over the past year.

But the Iowa State Fair remains the gun-grabbers’ “trophy.”

They believe if the hordes of Iowans who travel from all over our state to attend will accept a “gun free zone” at the State Fair, they likely will at home too!

This is sheer madness.

As you know, by definition, criminals don’t obey laws. So all “Gun Free Zones” do is ensure that violent thugs never have to worry about running across someone carrying a gun.

The politicians and bureaucrats have already taken care of that “problem.”

So is it any surprise that the areas killers most often pick to go on shooting sprees are Criminal Safety Zones?

Just consider Newtown, Columbine and Virginia Tech. Even the recent Charleston shooting was at a South Carolina church — where state law forbids firearms!

But of course, the gun-grabbers will never place blame where it belongs — on the CRIMINALS and the anti-gunners’ misguided policies that prohibit good folks from fighting back.

Instead, the anti-gun crowd and their pals in the media blame law-abiding gun owners and try to use these tragedies as an excuse to push even more gun control!

No matter what the gun-grabbers say, we’ll never create a safe society by disarming the good guys.

But today, all over the country, it’s not just schools and universities that are off-limits to law-abiding gun owners.

It’s churches, most restaurants, parks and a number of other state and local government buildings, as well.

And now, the gun-grabbers have launched their own “Gun Free Zone” blitz right here in Iowa.

And the worst news is — instead of standing up for the rights of gun owners — Attorney General Tom Miller has refused to lift a finger to stop these anti-gun assaults!

It’s no secret that most politicians see the office of Attorney General as a stepping stone to fulfill even larger political ambitions.

I don’t believe Tom Miller is any exception.

So it’s up to you and me to send a LOUD AND CLEAR message to Tom Miller that if he doesn’t start standing up for law-abiding Iowa gun owners, the office of Attorney General will be his last.

But that’s not all.

As a taxpayer funded event, you and I can restore law-abiding Second Amendment supporters’ right to carry at the State Fair.

But it will only happen with your help. So please, take a moment to sign our “End Gun Free Zones” petition to your legislators right now!

If possible, I’d like to contact up to 100,000 gun owners in Iowa just in the next several weeks using mail, email and hard-hitting radio, newspaper and TV advertising to alert them to this crucial fight.

Of course, none of this is going to be cheap.

But if you and I want to stop the gun-grabbers’ Criminal Safety Zones here in Iowa, we can’t afford to sit on our hands for another second.

Instead we must act RIGHT NOW.

So can I count on you to sign your petition to your State Representative and Senator IMMEDIATELY?

And can I count on you for your most generous contribution of $100 right away?

Whatever you can give will be greatly appreciated.

The thought of losing this fight and having innocent Iowans pay the price in blood from the gun-grabbers’ misguided policies literally makes my stomach churn.

P.S. The gun-grabbers are launching an all-out “Gun Free Zone” assault all across Iowa. It’s up to you and me to stop them.

So please, sign the petition below to your State Representative and State Senator DEMANDING they stop the gun-grabbers’ assaults.

And to help pay for and expand this crucial fight, please rush me your most generous contribution of $100, $50 or at least $25 TODAY!