Will You Renew Your Membership in Iowa Gun Owners?

Will You Renew Your Membership in Iowa Gun Owners? 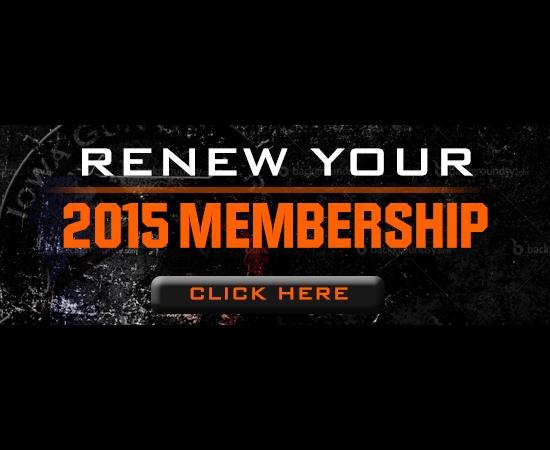 Aaron and the rest of the guys are out of the office today, meeting with gun owners in yet another Iowa town where the Mayor is determined to ban firearms on all city property – but he wanted to be sure you saw his email from last week.

As you can see, your renewed support in Iowa Gun Owners has never been more critical.

Whether it’s stopping gun control in the legislature, working to inform hundreds of thousands of gun owners at election time about where their candidates stand, or killing gun control measures at the local level – no one fights harder than Iowa Gun Owners.

That’s why I hope you’ll renew your support today, so Iowa Gun Owners can maintain the fight for our rights here in Iowa.

2015 will be a very active year, especially with all the national candidates beginning to launch their efforts in our state.

So please, read the email below from Aaron, and then renew your membership as soon as possible!

Thank you, in advance, for your support!

I’ve been working the phones to friends and allies inside the General Assembly in Des Moines feverishly for days now.

Nationally, gun-grabbers were lit up at the polls. Utterly destroyed. Even our national media (for now) isn’t letting them run away from that undeniable fact.

But here in Iowa, the facts are messier. The message politicians were sent in the November elections just isn’t quite as clear.

I’m afraid you and I have to be ready for anything when the next session of Iowa’s General Assembly convenes.

That’s why I’m hoping I can count on your most generous financial contribution to renew your membership in Iowa Gun Owners TODAY!

But first, I need you to understand just how important your renewed support is right now.

You see, my hope is that gun control won’t rear its ugly head when the next session of our General Assembly convenes.

But I’m not counting on it.

Rabidly anti-gun Senate Majority Leader Mike Gronstal is still calling the shots in the Iowa Senate with the same 26-24 Majority he had going into 2014.

Let me be clear. Many Capitol insiders and political experts viewed 2014 as their best shot in years to flip control of the Iowa Senate.

My fear is that aggressive anti-gun legislators here in Iowa are walking away from the 2014 elections feeling invincible.

And you and I can’t forget BILLIONAIRE former New York City Mayor Michael Bloomberg will be back and ready to do his worst, touting phony polls and trying to buy off politicians in BOTH parties with promises of political protection!

So I can’t just sit back and hope we won’t see the worst of their anti-gun schemes rear their ugly heads in 2015, including:

*** So-called “Universal Background Checks.” This has long been at the top of Michael Bloomberg’s agenda. As a former cop, I can tell you the only way to enforce this scheme is to track, trace and register every gun and gun owner in the state.

And you and I both know registration is the first step toward OUTRIGHT confiscation!

*** So-called “mental health” legislation to strip law-abiding Iowans of their Second Amendment Rights just because some bureaucrat doesn’t like your race, religion or political views.

*** The Convenience Store Gun Ban, outlawing firearms in ALL places that serve or sell alcohol, including grocery stores and public events, leaving thousands of Iowa clerks and patrons vulnerable to criminal attack.

But with Bloomberg’s ability to dump in piles of cash, how could I ever take victory for granted — especially when GOP-controlled legislatures and those with split control have passed similar bills in other states in recent years?

The good news is, with your help and increased strength in the Iowa House — thanks to an impressive showing on Election Day –- we should be able to hold these schemes off.

But I’m afraid making peace the “status quo” when it comes to our gun rights here in Iowa is NOT an option.

According to Guns & Ammo Magazine, Iowa is the 38th ranked state in the country when it comes to friendliness toward the Second Amendment. 38th!

Because year after year, politicians in BOTH parties campaign as “pro-Second Amendment,” but then work behind the scenes to keep pro-gun bills from even coming up for a vote.

Thus, the most virulently anti-gun politicians are allowed to comfortably hide in the shadows — until the timing is right to spring their radical gun control schemes on you and me.

This is exactly what Bloomberg is hoping for in Iowa…

But with your help, I’m not about to let him get his way.

That’s why, even as a I write you, Iowa Gun Owners is putting together an all-out plan to force votes in BOTH houses of the Iowa General Assembly on two critical pieces of legislation, including:

If passed, this critical piece of legislation would restore the right of law-abiding Iowa citizens to carry a firearm to protect themselves WITHOUT going through a bunch of bureaucratic rigmarole, paying expensive fees, or being added to a government list.

If passed, this legislation would empower law-abiding Iowans with the ability to protect themselves against criminal attack without fear of being targeted by an anti-gun prosecutor.

The good news is, forcing votes on these bills puts you and me in a win/win situation.

…Or Bloomberg’s allies will be exposed and forced out of the shadows for Second Amendment supporters to hold them accountable at the polls.

Putting this plan into action won’t be easy.

and me every step of the way.

So even as I write you, I’m putting the finishing touches on an all-out plan to mobilize gun owners all across Iowa using everything from mail, to Internet ads, to social media and an all-out media blitz.

But I need to start NOW to ensure the Iowa General Assembly is hit with a tidal wave of pressure as soon as they go back into session.

With your renewed membership, I’m confident we can do it.

You and I have already proven we can make a tremendous impact.

Just consider SOME of the successes Iowa Gun Owners’ members and supporters have seen in recent years:

>>> Defeating EVERY gun control scheme to rear its ugly head in our General Assembly since IGO’s formation;

>>> Paving the way for passage of “Shall Issue” in 2010 after launching a statewide mobilization campaign to reform Concealed Carry laws;

>>> Generating pressure to successfully remove gun bans in localities like Tama and Burlington and businesses like NAPA Auto Parts in Des Moines, Subway in Keokuk and Sparky’s One Stop in Audubon;

>>> Holding dozens of anti-gun politicians accountable for their assaults on our gun rights.

Of course, there’s so much more I could tell you about!

Republican Rod Blum, who pledged 100% support for our gun rights, won by just over 2% of the vote.

But the most important race could have been Daryl Beall’s race in Iowa’s 5th Senate District.

Senator Beall was Michael Bloomberg’s right-hand man here in Iowa and the bill sponsor for so-called “Universal Background Checks” – which would make Iowa grandfathers felons for passing down family firearms without government permission!

On Election Day, Beall was defeated by almost 3,000 votes!

Even though anti-gun Democrat Senator Mike Gronstal retained his Senate Majority, my hope is the result of the Beall race will make him think twice about launching a new attack on our Second Amendment rights.

He knows Iowa Gun Owners means business. He knows we don’t cozy up to politicians or take any “bunk” from any of them.

And gun-grabbers all across Iowa know we’re unquestionably one of the most powerful forces in our state’s politics.

But that’s only because of one thing…

Nothing Iowa Gun Owners does would be possible without the generous support of good folks like you.

The only reason politicians fear attacking our gun rights is because they worry about what could happen to them when I sound the alarm and Iowa’s Second Amendment supporters spring into action.

2015 will bring its share of new threats. That’s why I hope you’ll renew your support in Iowa Gun Owners today – at whatever level you can.

I can’t promise gun control is dead in Des Moines. Even if it is, I know you and I have some major work to do forcing votes on Constitutional Carry and Stand Your Ground.

2015 is going to bring a slew of presidential candidates to our state as well, which will bring its own set of challenges and opportunities.

What I need to know from you today is if I can count on you to stand with me. Will you renew your membership in Iowa Gun Owners today?

And I know I don’t have to tell you that you personally have been a critical part of many crucial victories.

Won’t you please renew your support right away?

The amount you choose to renew at is up to you. But won’t you please be as generous as you can?

The truth is, you’re a critical part of a winning team in Iowa Gun Owners.

I’m counting on your continued support.

Thank you so much for all you do.

P.S. The 2015 session of the Iowa General Assembly is going to be absolutely critical.

I need you on board.

Won’t you please do so today? The amount you choose to renew at is up to you. Just please act at once!