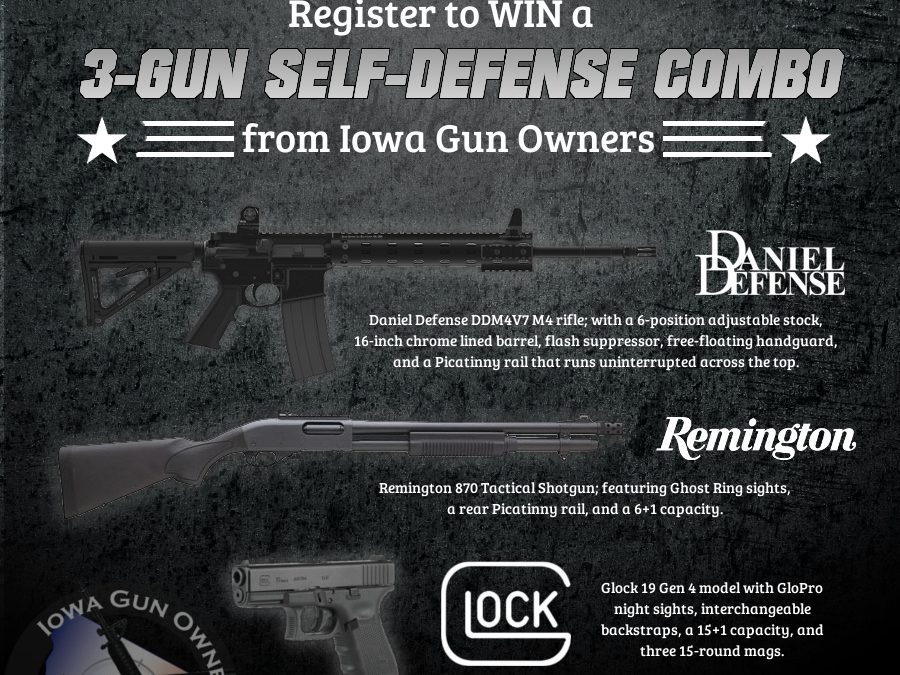 Willard G. from West Point, is the winner of our 3-Gun Self-Defense Combo giveaway!

As you’ll remember, to celebrate the recent passage of Stand–Your–Ground law, Iowa Gun Owners conducted one of the largest gun giveaways in our organization’s history!

A Daniel Defense M4, a Glock 19, a Remington Tactical shotgun along with holsters and ammo, and more — this giveaway had it all.

Thank you to everybody who signed up and helped us spread the word about this giveaway.

I hope you’ll join me in congratulating Willard for winning this incredible giveaway package.

For those that did not win, I’m happy to report that Iowa Gun Owners will be doing at least one more gun giveaway this year!

The theme for our upcoming giveaway, will be celebrating the defeat of six anti-gun State Senators who were removed from office by the members of Iowa Gun Owners last fall.

Of course, this stunning victory paved the way for the successful Stand–Your–Ground fight that we waged this year!

Rumor has it that this giveaway will feature six firearms — being given away to six lucky Iowans!

Make sure you sign your petition in support of this legislation!

If you did not win this gun giveaway, stay tuned — as we are unveiling at least one more gun giveaway program this year.

And this next giveaway will feature six firearms and six individual winners — as we celebrate last year’s defeat of six anti-gun incumbents, which paved the way for the passage of Stand–Your–Ground law earlier this year!

And if you haven’t already done so, take a moment to sign our petition in support of Constitutional Carry for 2018!