A Message to Gun Grabbers in Iowa: You’re Fired!

A Message to Gun Grabbers in Iowa: You’re Fired!

What a night for the 2nd Amendment here in Iowa and across the country!

Nationally, gun-grabbers were lit up at the polls. Utterly destroyed. Even our national media (for now) isn’t letting them run away from that undeniable fact.

Gun owners in Iowa have much to be happy about as well, as many anti-gun legislators and candidates went down in defeat – in part because of their relentless attacks on the 2nd Amendment.

Beall, a signature sponsor of Bloomberg-styled ‘Universal Registration’ law, had desperately tried for 18 months to get gun owners to forget about his savage attack on our 2nd Amendment rights that would see law abiding Iowans locked up for transferring firearms, even family heirloom pieces, to family members without government permission!

But we were determined to not let that happen.

Iowa Gun Owners, thanks to your donations, set about on an educational program to expose Senator Beall and hold him accountable for his anti-gun actions in Des Moines.

We did this on the ground in the district going house-to-house, running some of the hardest hitting radio ads this election, sending out waves of direct mail, targeted social media posts, mass email deployments and more!

These educational efforts we very well received by people in district 5 – who were shocked to learn about all of their senator’s anti-gun actions, taken on their behalf, in Des Moines.

On Tuesday night, these gun owners told Senator Beall EXACTLY what they thought of his radical agenda.

Of course, thanks again to the donations of our members, Iowa Gun Owners was busy in the 1st Congressional race which pitted an aggressively pro-gun candidate (Rod Blum) against one of the most aggressive anti-gunners that we’ve ever met in the Capitol (Pat Murphy.)

Pat Murphy, former Speaker of the House, went out of his way to tell his pals in the media and anti-gun special interest lobbies about his desire to register all firearms, expand mental health laws in dangerous ways, and crack down on your gun rights any way he could.

But in his district, Murphy did his best to hide behind some marginal gun voters he’s taken over the past 25 years he’s spent in office.

He also ‘forgot’ to tell gun owners that he personally killed Constitution Carry, or that he voted against Stand-Your-Ground law, or that he seemingly supports banning standard capacity magazines.

So we told them. Lots of them. In fact, IGO dropped so much mail in this race that we had to rent a big truck just to haul it to the post office! 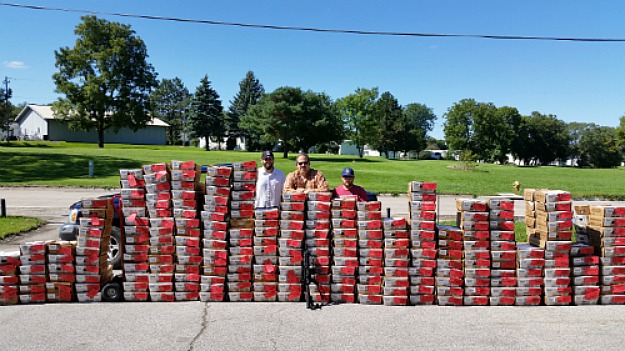 (Direct mail, mountains of it, poured into the first congressional district from IGO, making sure gun owners knew about Pat Murphy’s decades-long attack on gun rights.)

This mail was backed up with robocalls, Facebook posts, and volunteers who spent multiple days going house to house in portions of the district, meeting personally with gun owners.

Tuesday night, Pat Murphy’s 25 year record of attacking gun rights was ended in what Politico has called one of the nation’s five congressional upsets of the night, as gun owners in that district removed him from office by a tiny 2% margin.

Iowa Gun Owners worked tirelessly in these races to bring the truth to gun owners, telling them the truth about where the candidates stood. We ran some of the hardest hitting radio ads of this election cycle in these communities – check one out below. 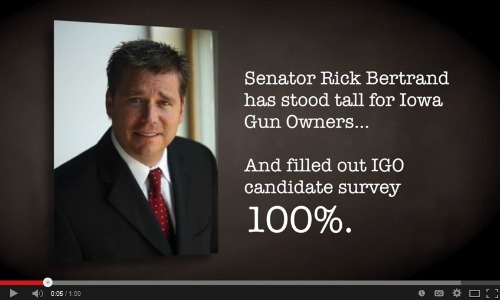 More than that, as the photo below shows, teams of IGO volunteers worked all over Senate District 41 just last weekend, exposing Steve Siegel’s radical views on your right of self-defense.

In Carroll, the most wildly anti-gun legislator was removed from the House by a whopping 10% margin.

Dan Muhlbauer made national news in 2012 when he called for a ban on all semi-automatic firearms – including everyday .22 squirrel hunting rifles – and a house-to-house confiscation of all of these firearms that gun owners currently own!

Iowa Gun Owners has spent the better part of 2 years ruthlessly exposing Muhlbauer for his positions.

While Brian Best didn’t sign our survey, limiting our ability to be involved in this race, it’s clear that after two years of information about Muhlbauer’s ruthless attack on the 2nd Amendment, gun owners in that district had enough.

Not every pro-gun candidate won their election on Tuesday. There were some races where anti-gunners were able to mask their record from the voters and squeak by by tiny margins like Charlie McConkey, who defeated John Blue by just 73 votes.

At the end of the day, the State Senate remains under the control of anti-gun radical Michael Gronstal. This means that gun owners will be in a fight on day one when the gavel falls in Des Moines next January.

Bloomberg’s minions in the legislature are ideologues. They will continue to come after our rights. They won’t stop.

With your help – neither will we!

Iowa Gun Owners will rout out and expose anti-gunners at every turn.

From town councils trying to ban your right of self-defense, to powerful State Senators bent on destroying our way of life, Iowa Gun Owners will never stop exposing them and holding them accountable for their actions.

In the coming days you’ll be hearing more from us about the coming fights in the legislature as well as yet another city council bent on striping you of your right of self-defense. We’ll need your help in fighting these fights.

For now, thank you for helping us stand up for the 2nd Amendment here in Iowa!

P.S. Gun grabbing politicians all across the county went down to defeat last night – many of them from right here in Iowa!

Many pro-gun legislators were re-elected Tuesday night, as well, thanks in part to gun owners who have rejected the anti-gun agenda being pushed by so many candidates here in Iowa.

Stay tuned, as radical anti-gunner Michael Gronstal still holds control over the State Senate and we know we’ll be in a fight as the session kicks off next January.