A New Tool in the Fight for the Second Amendment!

A New Tool in the Fight for the Second Amendment! 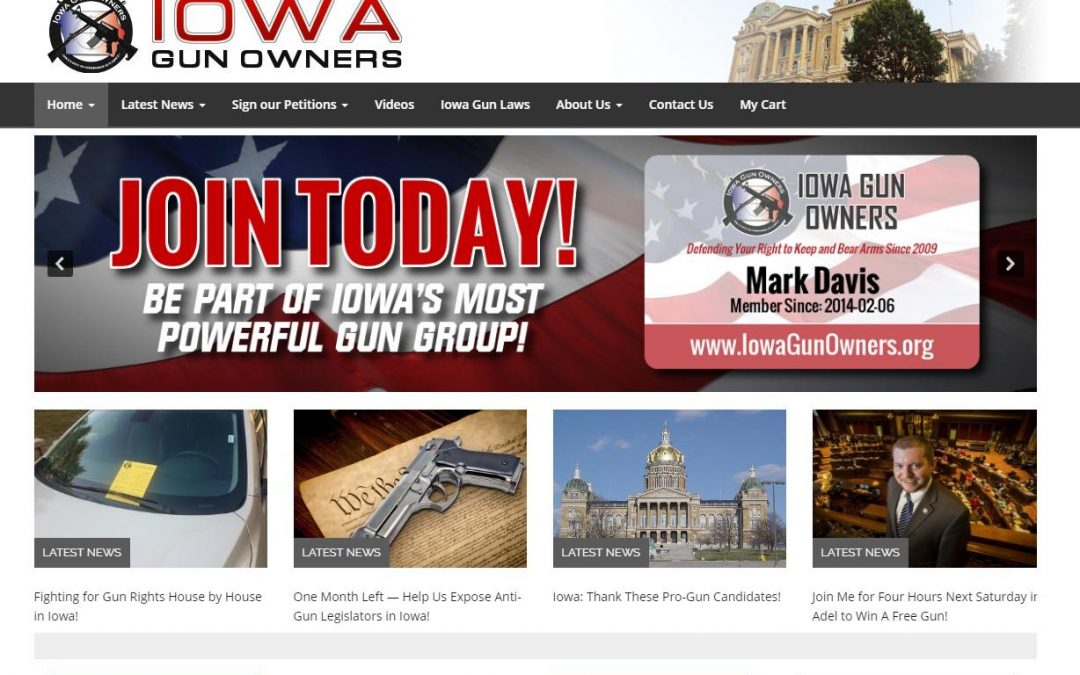 As we prepare for the 2017 legislative session, I wanted to make sure you had a chance to visit our brand new website located at www.IowaGunOwners.org!

This totally redesigned website will be an important tool as we organize and mobilize gun owners here in Iowa next year, with the goal of passing both Constitutional Carry and Stand-Your-Ground law.

At the top of the new site, you’ll be able to sign your petitions calling on the legislature to pass these important pieces of legislation, sign up for our free email updates, check out the latest videos from Iowa Gun Owners from the Capitol, and much more.

In the “2nd Amendment in the News” category, we’ll be highlighting stories of fellow gun owners who’ve used their firearm in a self-defense situation — since you won’t hear about those stories in the main-stream media.

If you’re looking for T-Shirt, coats, member decals, “No Gun$ – No Money” business cards to hand out to anti-gun businesses you can find all of that and more in our redesigned “Gear” store under the “Home” button!

If you want to join or renew your membership in Iowa Gun Owners we’ve made that simple. Just go to the top of the page, click on “Join Today” and choose the membership level that you want to buy.

(Remember, all memberships at the Silver level or above come with a FREE T-Shirt and member decal and we’ll ship them to you for FREE as well!)

But something that we’re particularly pleased to feature on our site is our new “News From Other States” tab which is going to be highlighting the fight for the Second Amendment in other states!

For example, our neighbors to the South in Missouri just passed Constitutional Carry and Stand-Your-Ground law this year, an effort spearheaded by our allies at the Missouri Firearms Coalition.

With the elections just over, we’re told that not a single legislator who voted for the bill in Missouri lost their re-election. Not one!

In fact, the pro-gun majorities down there actually grew in the senate as a result of that vote.

Meanwhile, in Minnesota, our sister organization Minnesota Gun Rights pulled off a major coup this month by exposing many anti-gun incumbents in the Senate, resulting in gun owners flipping the Minnesota Senate to a pro-gun majority!

You can follow along as our allies in the Idaho Second Amendment Alliance take the next step in their state next year, by working to greatly strengthen their Castle Doctrine bill, having passed Constitutional Carry just this year.

Of course our long-time friends at Georgia Gun Owners will no doubt be locked in a pitched battle with notoriously anti-gun Gov. Nathan Deal again in 2017.

Deal, who vetoed a simple (and greatly watered down) campus carry bill earlier this year, is feeling the heat from GGO members and is looking to pass gun legislation in 2017 to escape the heat that he’s taking!

And, as always, you’ll be able to see the latest “Anti-Gun Business of the Week” posts and hilarious pro-gun memes on our site, too, under our Facebook tab.

So stop by and check out the new website!

While you’re there, feel free to sign our petitions in support of Constitutional Carry and Stand-Your-Ground law and join as an IGO member as well!

For all of our existing members, keep an eye on your inbox as we’ll soon be giving you information on updating your memberships as we close out 2016 and prepare for the opportunities that 2017 will bring.

Gun owners fought hard to boot out anti-gunners in the Iowa Senate, paving the way for passing real pro-gun legislation in 2017.

But we have to be vigilant and make sure that promises made to us on the campaign trail are kept.

Thanks for your continued support!

P.S. Iowa Gun Owners has just rolled out a brand new website as we prepare to kick off a new legislative session, so check it out at www.IowaGunOwners.org!

This website will soon become your one-stop shop for not only all gun related issues in Iowa, but also in states all over the country as gun owners are realizing that perpetual in-state organizations are the best route to safeguarding our freedoms!

You’ll be able to join up, get IGO gear, hear about self-defense situations involving firearms, watch the latest video updates from the Capitol, and more.

So be sure to check it out, and make sure your friends do too!