Anti-Gun Nevada Iowa City Officials Try to LIE to Cover Up Their Tracks!

Anti-Gun Nevada Iowa City Officials Try to LIE to Cover Up Their Tracks! 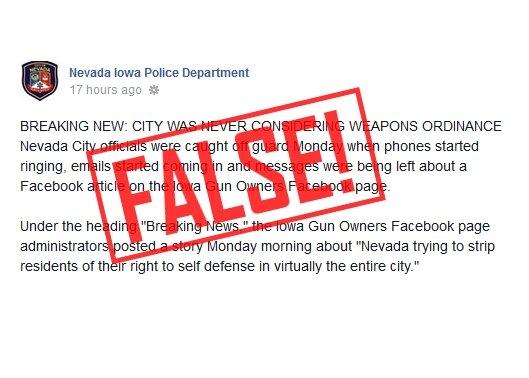 “Nevada City Administrator Elizabeth Hansen said the article’s claim that the city is trying to pass an ordinance is false,” proclaimed the headline story on the Nevada Journal.

“[Mayor] Lathrop said those claims (regarding the banning of defensive weapons on all city property) are untrue,” opined the Ames Tribune.

Yesterday the city fathers in Nevada, IA, were in a full blown retreat mode after we broke the news about their attempts to invalidate all concealed carry permits on city property.

If enacted into city code, you and I would lose our right to defend our family when attending functions on city property in Nevada – property that taxpayer dollars go to maintain!

Yesterday’s three random shootings in nearby Pleasant Hill make it clear that the police can’t be in all places at all times.

That’s why we fight so hard to defend our gun rights in Iowa – so law abiding Iowans have the ability to defend themselves and their families in the event of a violent criminal attack.

Yet, the city government in Nevada wants to strip you of that right.

Like Tama, Dubuque, Burlington, George and other Iowa towns who’ve had to deal with angry gun owners, city officials in little Nevada, IA, are now trying to figure out how to deal with the mess that they have made.

That’s right, seemingly everyone in Nevada from the Police Department, the City Administrator, the Mayor, and others have all said that they never attempted to act on an ordinance to restrict your 2nd Amendment right on all city property in “their” city.

The truth is, they did, and we have the document to prove it!

We had a sneaking suspicion that city officials would try to lie about this proposal, to pretend that there were no documents linking them to this attempt – and so we held off on releasing the documents in yesterday’s communication to our members and supporters.

Reporters that we spoke with yesterday were indignant that we didn’t release our source for this tip.

Anti-gun agitators on our Facebook page have been wailing non-stop since we broke this story – demanding to know who our source is.

But they’ll have to wait a long time – as Iowa Gun Owners NEVER reveals a source who wants to remain anonymous!

If we revealed the identity of this fiercely pro-gun hero, the next time a pro-gun city councilman, county supervisor, or city hall secretary wanted to sound the alarm they wouldn’t dare trust us.

The threat of professional, political and personal retribution is real – especially in anti-gun hotbeds like Story County. Gun owners are right to worry about retribution as a result of speaking out.

But know this, if YOU work for a city or county government, are fed up with your local government’s attempts to violate Iowa’s pre-emption law (724.28,) and want to inform us of an impending anti-gun proposal, rest assured no matter how many newspapers and government officials demand to know your identity, we’ll never compromise you!

Give us the ammo we need to fight for the 2nd Amendment rights of all Iowans – we’ll take the heat – and protect you along the way.

In the meantime, check out the documents that were given to Iowa Gun Owners that make it clear that Nevada was working hard to strip you of your right of self-defense! 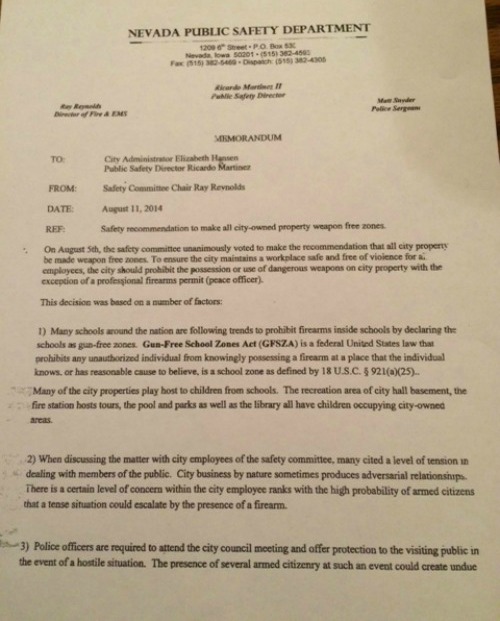 (A 2-page memo, addressed to City Administrator Elizabeth Hansen, the same gal who denied an any attempt to restrict gun rights was underway in Nevada, shows the truth – Nevada was trying to ban your right of self-defense at all city parks, the library, pool, fire hall, city hall and more!) 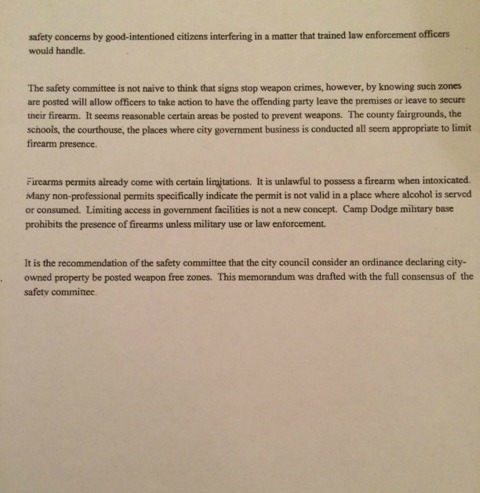 The last paragraph sums it up: “It is the recommendation of the safety committee that the city council consider an ordinance declaring city-owned property be posted weapons free zones.”

In other words, Nevada wants to leave you absolutely helpless should some mad-man attack you or your family at virtually all public functions in Nevada!

If enacted, this would only result in innocent people being assaulted, or worse – as criminals would never obey a sign that prohibits weapons.

Our source informed us that this document, dated August 1st, was being actively passed around by the Mayor who was trying to button up support before taking this document public – likely knowing what would happen when Iowa Gun Owners found out about it.

Thankfully, we were alerted in time, and were able to sound the alarm.

But we’ve never seen a governmental body try so hard to lie to the citizens that they work for as we’ve experienced in Nevada over the past 24 hours!

The level of chutzpah and sheer arrogance is remarkable.

If you are angry about being lied to, over and over and over by everyone from the Nevada Mayor, the Nevada Police Department, and the Nevada City Administrator, feel free to contact them – and make sure to tell all of your friends.

Remember when you’re talking with these people that they’ve all lied to you, overtly. Be careful taking any statements that they give you at face value.

For the moment, it would appear as though your call and emails have stopped another town gun ban from getting off the ground! Thank you for all your work!

And, of course, we would like to thank our source for tipping us off to what was happening in the first place!

Please remember to let IGO know if you learn of similar gun bans being proposed by your city or county government. Thanks to you, we’ve stopped 6 attempts this year

P.S. After getting a massive number of calls and emails since we broke the story of their attempts to ban your right of self-defense in “their” city, the city government in Nevada, IA, chose to LIE to the citizens there as well as everyone who contacted them yesterday by denying that they ever attempted to attack the 2nd Amendment.

It was foolish of them – as we’d never publish something like we did yesterday without having proof.

To see the documents that Nevada is pretending don’t exist, read the top portion of this email.

If you work for a city or county government here in Iowa, and you are aware of secret attempts being made to crack down on the 2nd Amendment, and would like to get us involved – please know that as the firestorm of the last 24 hours proves, IGO will NEVER reveal your identity!

In the meantime, make sure you call the mayor, city administrator, and police chief in Nevada – let them know what you think of their contempt for the truth, not to mention the 2nd Amendment!