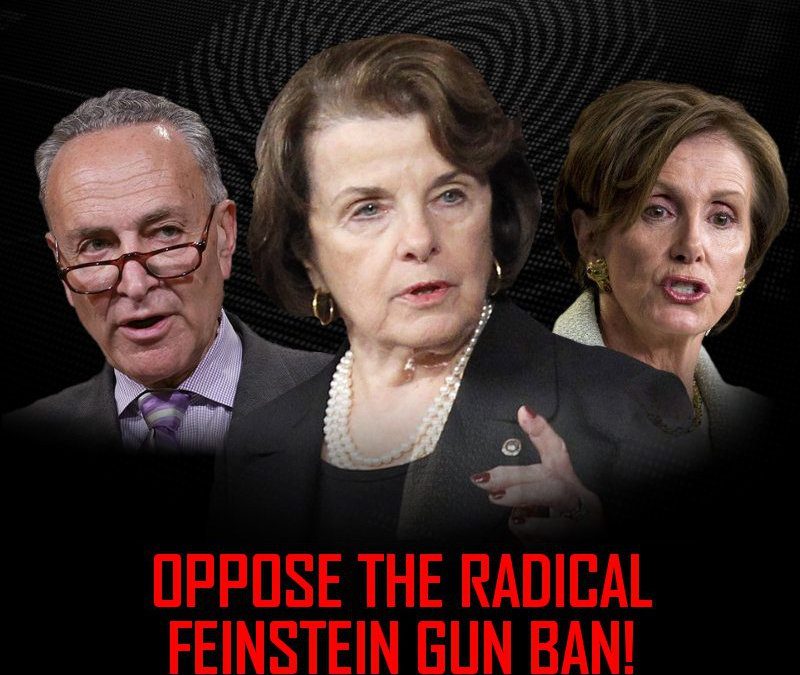 In the wake of the Florida shooting, the radical gun-grabbers in Washington D.C. are moving as fast as they can to ‘cash in’ in any way they can.

And this isn’t just a listing of exotic firearms; this listing includes rifles, handguns, and shotguns.

Of course, with the definitions being as broad as they are, hundreds more firearms that you and I legally enjoy today would be swept up in this attack on our gun rights!

The Senate version of this bill already has 27 cosponsors and the House companion bill (H.R. 5087) has amassed a whopping 173 cosponsors and is adding more almost daily.

Here in Iowa, Congressman Loebsack is one of the cosponsors to the House version of this bill, which is why I hope you’ll sign our petition OPPOSING the Feinstein gun ban below!

Sometimes a gun owner will tell me at a gun show or over the phone that ‘I already have what I need, so this wouldn’t impact me.’

The bill specifically does away with the ‘grandfather clause.’

Worse, it makes instantaneous felons out of you if you possess one of the hundreds of firearms that meet their criteria after the bill takes effect by making it unlawful to import, sell, manufacture, transfer, or possess them.

You can not own it.

But you also can not sell it.

Nor can you give it away!

And as you can likely imagine, the bill also makes it an instantaneous crime to possess a magazine that holds more than 10 rounds of ammunition.

Like the firearms ban, you can’t give the mag away, you can’t sell it, and you can’t transfer it.

This is a blatant attempt to make criminals out of millions of gun owners who possess these firearms and accessories right now!

So much for handing down family firearms to your children or grandchildren.

More than the actual firearm, so much for being able to hand down a love for freedom, the Second Amendment, and personal responsibility should this bill pass!

I think this bill is simply outrageous. If you agree with me, please sign your petition today opposing the Loebsack-backed Feinstein gun ban!

I don’t know about you, but in the wake of the Florida shooting I am fired up and not willing to shrug and support ANY gun control of ANY kind.

That’s because the Florida shooting was a stark reminder of two things: gun control and the government in general aren’t going to be able to stop violent crime!

The murderer in Florida passed his government mandated background check — which didn’t stop him.

He entered a federally mandated ‘gun free zone’ — which didn’t stop him.

The FBI was notified that this individual may attack a school numerous times — which didn’t stop him.

But rather than admit that all of the gun control laws on the books right now failed in Florida — as they have in so many other states — anti-gun lawmakers are trying to blame law abiding gun owners!

Here at Iowa Gun Owners, we’ll never back down and agree to ‘a little gun control’ in the wake of a shooting. Never!

If you agree, and are opposed to the Feinstein Gun Ban, please sign your petition right now!

We all know how this game is played.

Even if gun grabbers aren’t able to pass the entirety of this bill right now, if they get gun owners to agree to give an inch now, they know that in time they’ll get the whole mile!

And with the media whipping the anti-gun frenzy every hour of the day, even normally pro-gun lawmakers are signaling their willingness to make a deal.

So now is the time for grassroots gun owners to stand up and fight back and say “NO” to any gun control of any kind!

And when you’re done, I hope you’ll consider a donation to help Iowa Gun Owners spread the word about this bill and mobilize as many gun owners as we can.

Too many gun owners assume that this problem is going to ‘blow over’ in time.

But this is different, as many of our ‘allies’ are banging the gun control drum.

Please do whatever you can, today!

P.S. In the wake of the Florida shootings, anti-gun lawmakers in D.C. are trying to advance their gun control agenda including the Feinstein gun ban!

The Senate bill has dozens of cosponsors while the House bill has over 170 — including Iowa’s Dave Loebsack!

Help us stop the Feinstein Gun Ban, by signing your petition right away!

And when you’re done, please make a donation to help Iowa Gun Owners stand up and fight back against any attack on the Second Amendment!