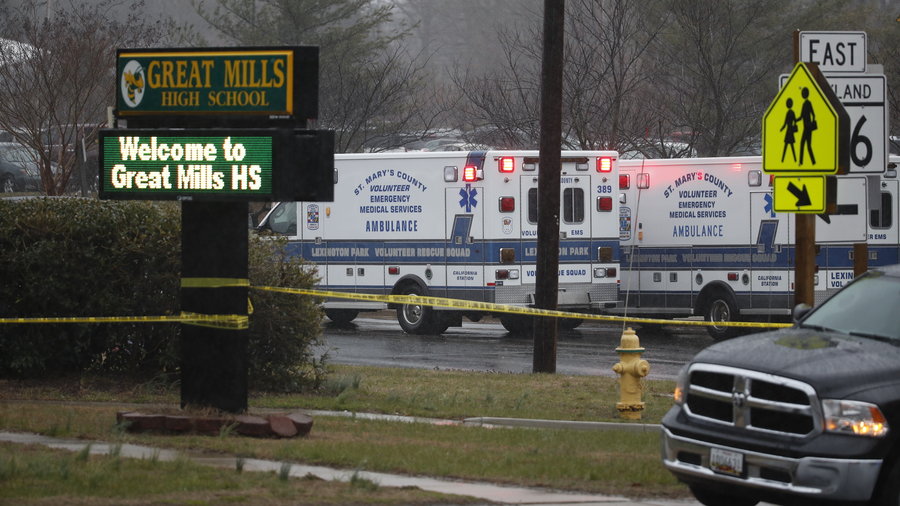 Tuesday morning the Fake News, anti-gun lawmakers, and gun control groups were jumping up and down as another school shooting was playing out on national TV.

Like all of the shootings before it, gun grabbers were hoping to use the news of the Maryland school shooting to further their ant-gun agenda.

But by noon, the story seemingly vanished.

That’s because — far from making the case for gun control — the Maryland shooting showed the utter failure of gun control in stopping violent crime!

And that’s why I hope you’ll sign your ‘STAND and FIGHT’ petition, telling your Iowa lawmakers to push for Constitutional Carry law this session. More on that below.

Maryland already has a complete firearms registration program in place, putting every gun owner in a central database.

Maryland also has a complete ban on the AR-15 and 45 related firearms.

Maryland has a ban on mags that hold over 10 rounds of ammunition.

Maryland has extensive ‘Gun Free Zones,’ including the school in question from yesterday.

Lastly, Maryland has a SEVEN day waiting period on all handgun sales.

But, as is always the case, all of that gun control failed to stop the criminal who ignored all of those laws as he carried out his violent attack!

But it gets even worse for the radical gun grabbers.

That’s because while all of the gun control laws in Maryland failed to stop this shooter, he was stopped…by a good guy with a gun!

An armed school resource officer was onsite, heard the attack taking place, and shot and killed the suspect during the shooting spree!

And so the lesson from the Maryland shooting is simple: the best way to stop violent criminals is to put more guns in the hands of law abiding citizens.

That’s why it’s urgent that the Iowa legislature stand up and fight for gun owners and the Second Amendment by passing Constitutional Carry law!

If you agree, sign your STAND and FIGHT petition NOW!

Ever since the Parkland, FL shooting, nervous legislators have been scared to advance Constitutional Carry — even though that is exactly what is needed to help make Iowa safer!

And it’s not just Iowa Gun Owners saying this.

In Colorado, the State Senate just passed Constitutional Carry, sending it to the House for consideration.

Lawmakers in these states clearly know that the best response to a mass shooting is to increase Second Amendment freedom.

Now it’s up to the Iowa legislature to do the same thing.

So please sign your petition, insisting that they FIGHT for gun owners by passing Constitutional Carry!

After all, Constitutional Carry simply allows law abiding Iowans to be able to carry a firearm without needing additional government permission or adding their name to a government database.

This is the law today in over a dozen states, and is on the move in many more.

We’ve already passed a critical Senate Sub-Committee, but nervous members of the Judiciary Committee have been too scared to act on it since then.

But with the session winding down in Des Moines there is no time to lose, so sign your petition today!

And when you’re done, I hope you’ll get even more involved in this fight for the Second Amendment.

If you haven’t yet done so, please become a member of Iowa Gun Owners right away!

With so much going on in Des Moines and Washington D.C., we need your support now more than ever.

And, if you are already a member, please consider a special contribution to help us maintain this fight for the Second Amendment!

The Maryland shooting is just the latest in a series of mass shootings that reveal the utter failure that gun control has been in keeping Americans safe.

And, yet again, it showed that armed ‘good guys’ are the best way to stop criminals in their tracks!

It’s time that the legislature in Des Moines acknowledge this and advance Constitutional Carry law!

Rather, an armed ‘good guy’ saved many more people from being harmed.

That’s why it’s critical Iowa lawmakers stand up and fight for the Second Amendment by passing Constitutional Carry law yet this session!

And, when you’re done, please become a member of Iowa Gun Owners by clicking on the image below.