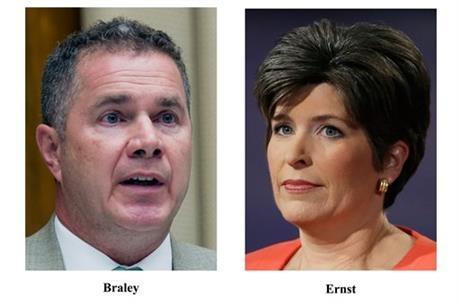 As last weekend’s “Iowa Poll” indicates, the race to see who will be Iowa’s next United States Senator is going to come down to the wire as this race is locked in a virtual dead heat with less than 1% separating the candidates from each other.

As one Iowa political commentator told us recently, “This is one of the closest races I’ve ever seen…It’s simply too close to call.”

That’s why Iowa Gun Owners wants to make sure that you have accurate information about where these candidates stand on your right to keep and bear arms.

As you know, Iowa Gun Owners surveys all the candidates seeking office here in Iowa.

Sadly, at this point, Senator Joni Ernst has refused to go on the record and put her views in writing by refusing to sign the Iowa Gun Owners/National Association for Gun Rights candidate survey.

That being said, we do wish to point out that Senator Ernst has been helpful in the State Senate and has cosponsored IGO legislation in the past.

However, Bruce Braley’s disdain for gun owners here in Iowa is not a secret, as he loudly and publicly identifies himself as a radical anti-gun politician.

As gun owners know, last year we saw the most aggressive attack on our gun rights in over a generation!

Gun-grabbers were trying to ban modern firearms, pass arbitrary limits on magazines, pass sweeping so-called ‘mental health reforms,’ and a host of other anti-gun pieces of legislation – as an emotional response to a deranged killer’s actions in Connecticut late in 2012.

Thanks to the work of millions of pro-gun activists like yourselves, each of these attacks on our freedoms were shot down.

But as everyone knows, we are only one criminal shooting away from finding our rights under attack yet again.

That’s why it was so alarming to hear Congressman Braley, at last weekend’s Senate Candidates’ debate, profess his aggressive support for radical gun control including:

>>>  Universal Firearms Registration; the only way the      gun grabbers can run backround checks on every      firearm and every firearms’ purchaser is to have a      complete registration of all firearms and their      owners to check them against.

Congressman Braley supports this radical agenda being pushed by President Barack Obama and billionaire Michael Bloomberg. And as gun owners know, and as history has shown us time and time again, the first step towards gun confiscation is gun registration.

>>>  Gun control under the guise of Mental Health      Reforms; the use of so called ‘mental health reform      legislation’ represents one of the most dangerous      attacks on our gun rights, as the ability to      reclassify entire portions of the American      population as being mentally deficient, without any      due process of law, would take firearms away from      potentially millions of Americans.

In fact, hundreds of thousands of veterans across the country have lost their gun rights due to the say-so of one individual mental health professional.

If Congressman Braley has his way, you and I would have more due process rights contesting a traffic ticket than you would when fight to keep your right to keep and bear arms.

This is law in many states currently – and the fact that Congressman Braley opposes this common sense measure speaks volumes as to his hostility towards the second amendment.

Perhaps that explains why out-of-state, out-of-touch SuperPacs have spent close $200,000 already, trying to influence this election.

And that’s why I hope you’ll take a moment to contact Congressman Braley today!

Tell him to apologize for attempting to leave Iowans vulnerable to attack by limiting the types of firearms that they can carry for self-defense!

Tell him to apologize for opposing constitutional carry legislation, which would ensure that more Iowans have the means for self-defense!

And while you’re at it, please feel free to contact Joni Ernst and ask her to sign the Iowa Gun Owners’ candidate survey, putting her views on the record.

Insiders report to us that Senator Ernst is being corralled by a host of high-priced Washington DC consultants, who do not want her to complete this simple survey.

Make sure Joni Ernst knows that you want to see her views in writing by calling her campaign at 515-278-5613.

Then, I hope you’ll consider making a generous and immediate contribution to Iowa Gun Owners.

No organization in Iowa can educate and mobilize gun owners more effectively than Iowa Gun Owners, via Facebook, direct mail, email and other means.

Since IGO focuses largely on state legislative races, we are desperately needing an immediate influx of cash to be able to shine the light of truth on Congressman Braley’s recent statements in opposition to the second amendment.

As last year’s fight for our gun rights made clear, the threat to our second amendment rights have never been greater, and we must act now to make sure that as many gun owners in Iowa as possible learn about Bruce Braley’s hostile stance.

I hope you’ll do whatever you can, right away!

P.S. At last weekend’s US Senate Candidates’ debate, Bruce Braley made it clear that he supports the entirety of President Obama’s radical opposition to your second amendment rights!

Universal gun registration, gun control under the guise of ‘mental health reforms’ opposition to constitutional carry legislation – Bruce Braley made it clear he supports it all!

While Joni Ernst has not signed the Iowa Gun Owners/National Association for Gun Rights candidate pledge, she has been willing to cosponsor our legislative goals in the capitol in years’ past.

As this race enters the final stretch with the candidates locked in a virtual dead heat, I hope you’ll take a moment to contact Bruce Braley today and tell him to apologize for supporting a radical anti-gun agenda and tell him to stand up for gun owners.

While you’re at it, be sure to send this email to all of your pro-gun friends across the state so they have accurate information on where these candidates stand.

Finally, I hope you can make an immediate contribution to Iowa Gun Owners to help us get the word out on Congressman Braley’s recent statements against the second amendment.

Our exhaustive fight at the state legislative level has left us unable to be as effective in the US Senate race as we would like to be. Your contribution of $1000, $500 or $250 is greatly needed!

However, if your situation allows you to make a contribution of $100, $50, or even $25, rest assured that it will be put immediately towards the fight for gun rights here in Iowa.

Whatever you can do, I hope you do it right away!