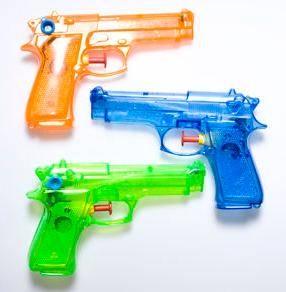 Sometimes “forward thinking” can be a good thing – as in when City Council members look ahead to their own re-election campaigns and make common sense decisions on behalf of their residents instead of pursuing a path of ideological craziness.

This is what happened yesterday in Burlington – as the City Council voted down their own proposal to require citizens and visitors in their city to obtain WRITTEN permission from the City Council before children could play with many types of toy guns.

In fact, it was so broad that you would be in violation of the ordinance if your child had one of these toys in the backseat of the car while you were driving around town running errands.

The penalty for being a brazen criminal who would allow your kids to use these toys as they run through the alley behind the house chasing fellow 8 year old criminals in a deadly game of Cops and Robbers – would be a fine in excess of $500 and a possible jail stint of 30 days.

On the one hand you want to just laugh at the insanity of such a proposal – if it wasn’t so serious.

As gun owners know, children all over America are being arrested, kicked out of school, and demonized for toy guns use on an almost daily basis.

Burlington’s City Council wanted to raise the stakes by being allowed to put “violators” in jail for a month, and wanted residents and visiting Iowans to simply trust that they would not abuse this power.

When we spoke with the Mayor, we laughed at this notion as gun owners are not idiots.

And so we took this to grassroots Iowans like yourself and urged them to take action.

Over 160,000 people saw our Facebook posts on this topic yesterday, and tens of thousands saw our emails where we urged you to call and email the council members.

Almost immediately the phone lines were jammed and people had a hard time getting through – a good problem to have indeed.

As a result, last night, Mayor McCampbell, voted against the proposal.

This was after angrily venting about IGO and IGO members who were there to protest this measure before the council, and protesting about what a good measure this was for Burlington.

In fact, the entire City Council joined with the mayor and killed this measure – with the exception of Council member Robert Fleming – who clearly was in denial about all the calls and emails that the council received yesterday.

Burlington now joins with George, IA and Dubuque, IA, making three towns this year where city hall wanted to pass some form of “Bogg Hogg” anti-gun madness but were stopped cold by IGO members who were mobilized by Facebook and emails.

In the past, a few “angry old guys” would protest measures like this, and would be steamrolled by a slick talking council member, city police chief (as was the case in Burlington), or city attorney.

Those days are over!

THANK YOU for all the calls and emails that you sent yesterday, they paid off!

If you hear about a similar measure being proposed in your town or county, please don’t hesitate to contact us by phone, email, or Facebook.

And if you want to support the hard, grassroots work of Iowa Gun Owners you may do so here knowing that your money goes directly to the gun rights fight in Iowa.

P.S. Close to 200,000 Iowans saw our Facebook posts and emails yesterday about the anti-gun madness being proposed by the City Council in Burlington, IA, where they wanted to make parents receive written permission from the city before children could play with many types of toy guns that Iowa children have played with for generations.

An overwhelming number of you took action and called and emailed the council, and as a result this measure was voted down last night, despite the angry denouncements of the Mayor.

Thank you for your activism! This makes three towns in a row now (Burlington, George, and Dubuque) where organized gun owners were able to stop such dangerous proposals before they became law.

If you want to join IGO and be a part of this ever growing grassroots army, please do so using the link below.