I could hardly believe it.

Yesterday, as I sat in the Public Safety Committee room in the basement of the Iowa Capitol, it was clear that members of the committee had been inundated with your calls and emails regarding the ‘Shaw Amendment’ to HF2012.

Yet late yesterday afternoon, the House Public Safety Committee Chairman chose to ignore that flood of calls and emails from voters in the committee member’s  districts, as well as gun owners across the state, and REFUSED to move the amendment from Rep. Tom Shaw through their committee!

In fact, rather than deal with this amendment, the committee killed the underlying bill all together so they wouldn’t have to vote on it!

The amendment offered by Rep. Shaw simply removed the age restrictions on when Iowa parents can teach their children to shoot a handgun. It was that simple.

Rep. Shaw and many pro-gun legislators in the Capitol were shocked to learn that it’s illegal to teach your own children to shoot a handgun unless they are 14 years of age!

The Shaw amendment would have simply allowed Iowa parents to decide when to teach their children how to shoot a handgun.

In killing this amendment, Committee Chairman Clel Baudler (R-Greenfield) is continuing the practice of making Iowa parents CRIMINALS for the “crime” of teaching their children to shoot a handgun before the government tells them they can.

This outrageous action should be a slap in the face to every gun owner in Iowa.

But more than that, every parent in Iowa, pro-gun or not, should be awestruck at the gall of these legislators in thinking that they know better than you when your children are ready to be taught to shoot a firearm! 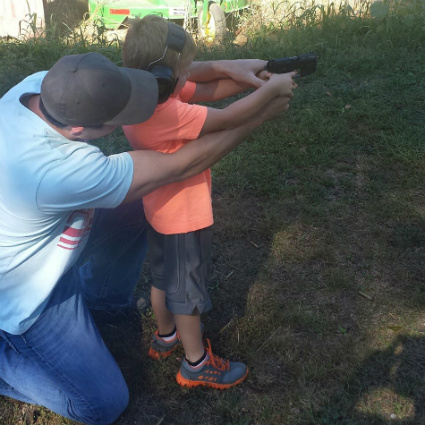 (This responsible Iowa parent now faces a year in jail and a fine of almost $2,000 because Public Safety Chairman Clel Baudler killed the Shaw Amendment to HF2012 – which would allow Iowa parents to decide when to teach youngsters to shoot a handgun.)

Of course, as the Committee Chairman, Rep. Baudler has the ability to bring this amendment back up for a vote anytime he wants during this session. The decision is all his.

That’s why it’s important that you contact Rep. Baudler right away.

Tell him that killing the Shaw Amendment, to continue the practice of making Iowa parents CRIMINALS for deciding when to teach their children to shoot a handgun, is simply outrageous.

Insist that he schedule an immediate vote on this critical legislation. To speak with Rep. Baudler please call him at 641-431-3309.

I hope you’ll also contact the House Majority Leader, Linda Upmeyer, and the Speaker of the House, Kraig Paulsen.

Tell them that the actions of Chairman Baudler are offensive to gun owners and parents all over this state. Insist that they move this legislation through the Public Safety Committee right away!

Virtually nothing goes on in their caucus without their approval and authorization. And as they appoint the Committee Chairmen they are responsible for his actions.

Please make sure they understand that you are expecting action on this legislation right away!

Then please consider helping Iowa Gun Owners mobilize as many Iowans as possible to this fight.

IGO is working around the clock right now on HF2012 as well as working to get a vote on Constitutional Carry and Stand-Your-Ground legislation.

Thanks for all of your activism this week.

P.S. In an amazing display of arrogance, the House Public Safety Committee Chairman, Clel Baudler, KILLED the amendment being offered today by Rep. Tom Shaw by killing the entire bill!

This amendment would allow Iowa parents to decide when to educate their children in the proper and safe use of a handgun – without needing the government’s permission.

Currently you are facing criminal charges with a year in jail and a $2,000 fine for simply teaching your son or daughter to shoot a handgun beneath a government approved age!

That’s why it’s urgent you contact Committee Chairman Clel Baudler right away and insist that he move this amendment through his committee right away! You can contact him at 641-431-3309.

Then also please call the House Majority Leader, Linda Upmeyer, and the Speaker of the House, Kraig Paulsen. Committee Chairmen answer to these two, and almost nothing goes on in Committees without their knowledge and approval.

Insist that they use their power to move this amendment through the committee and onto the Floor for passage.