Thank you to everyone who contacted members of the sub-committee and to those who showed up for the hearing earlier today.

This is a fantastic step forward for Iowans and this bill, which now goes to the full Senate Judiciary Committee!

I can’t thank you enough for all of your calls and emails that have gotten us this far.

But remember, we’ve been here before.

Last session we passed a similar sub-committee only to have the bill die the day after the Parkland, FL shooting. This year, with gun-grabbers on the war-path, anti-gun pressure will only increase!

Already dozens of anti-gun lobbyists are lining up in opposition to this bill, many of whom spoke against this bill in the committee earlier today. 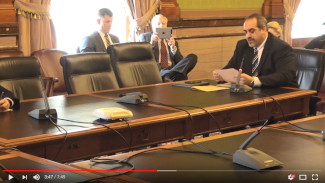 (IGO’s Aaron Dorr testifying in support of Constitutional Carry legislation on behalf of the members of Iowa Gun Owners.)

Of course, these are the same lobbyists who said that Iowa would plunge into chaos if we passed ‘Shall Issue’ legislation — and they were proven to be wrong.

Then they said that Iowa would see duels on Main St. if we enacted Stand-Your-Ground law — and they were proven to be wrong.

And now they claim that Iowans aren’t worthy of Constitutional Carry protection, either!

With your help, we’ll prove them wrong again.

Constitutional Carry would simply allow a law-abiding citizen to carry a firearm for self-defense without having to pay fees or add their name to a government database!

This is the same Second Amendment freedom that gun owners in FOURTEEN OTHER STATES currently enjoy, and that is being considered in multiple other states as we speak.

Right now, with such pro-gun majorities in Des Moines, is our best chance to make Iowa the next Constitutional Carry state!

We may not have a long time, as the House lost five seats last Fall alone. That’s why we need to insist that state lawmakers pass this bill in 2019!

I can assure you, your emails and phone calls into the Capitol are being heard loud and clear, so please do your part to help us keep the pressure on.

You can help us by:

>>>   Sending this pre-written email to the full Judiciary Committee, urging them to support Constitutional Carry with no weakening amendments.

(Please note this email only works if your Senator is on the committee. There is nothing we can do to change this.)

>>>   Sharing this email with every pro-gun friend you have, so they can make their voices heard, too!

>>>  Making a donation to help us keep up the pressure on lawmakers in Des Moines.

Remember, we are a long way from the finish line in this fight. But we’ve made great progress so far.

P.S. Earlier today the Senate Judiciary Sub-Committee passed Constitutional Carry legislation on to the full Judiciary Committee by a 2-1 margin!

Thank you to everyone who called, emailed or showed up in person in support of this bill.

The bill now has to pass the full Senate Judiciary Committee, which is why I hope you’ll send them committee members this pre-written email now!

And if you’re not yet a member of Iowa Gun Owners, we need your support — so please join and get involved TODAY!