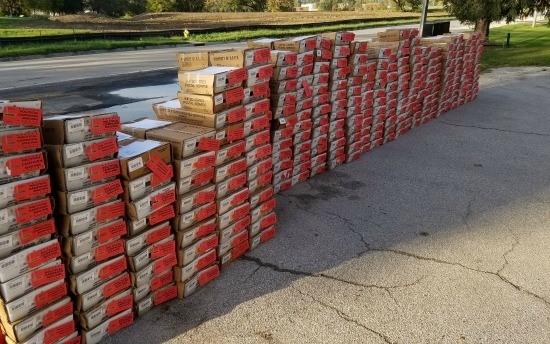 I’m going to be very blunt here — I need your help right away.

We’re down to the final eighteen days.

In eighteen days we’ll know whether or not we have a pro-gun majority in the Iowa legislature.

You know the score.

Senate Majority Leader Mike Gronstal has ruled the Iowa legislature with an iron fist, crushing Stand-Your-Ground law, Constitutional Carry law, and virtually every other piece of pro-gun legislation to hit his desk for years now!

Gronstal isn’t alone in his destruction of pro-gun legislation.

Senator McCoy is working to push a ban on AR-15’s into law here in Iowa.

Senator Steve Sodders blocked Stand-Your-Ground law as the Chair of the Judiciary Committee.

Senator Mary Jo Wilhelm is backing an attempt to create a searchable database of every Iowan with a permit to own or carry handguns.

I could go on and on — there are dozens of anti-gun legislators in the Iowa Senate who are working to crush your Second Amendment freedoms!

That’s why Iowa Gun Owners is fighting back — hard!

We’re working around the clock to expose these legislators, and others, using every tool at our disposal.

We’ve been hammering these legislators with mountains of direct mail to alert every gun owner in these targeted districts.

Check out the pile of mail that we’ve prepared to roll out as we approach the final week of the election season! 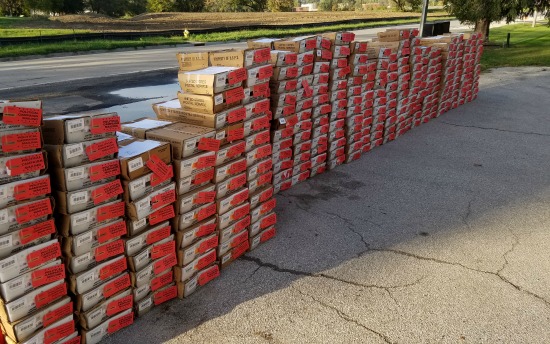 We’re reaching out to gun owners by the tens of thousands using our targeted Facebook program.

Check out this screen grab from our Facebook page of just one ad that we’re running in just one district — look at how many gun owners we’re impacting! 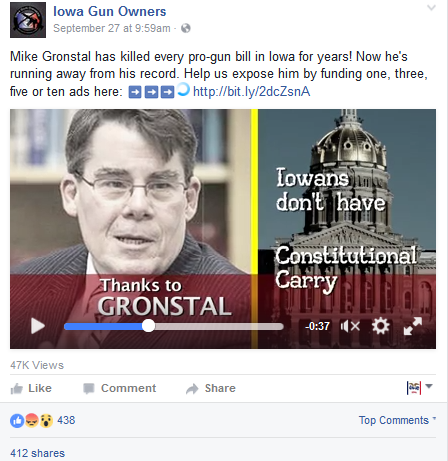 Iowa Gun Owners staff and volunteers have been going house-to-house in targeted districts on Saturdays, passing out flyers jam packed with detailed information on the history of anti-gun votes cast by these targeted legislators. 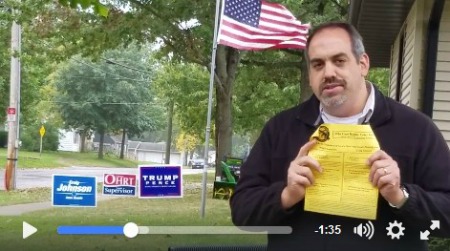 And we’ve run some of the hardest hitting radio and TV ads this cycle in targeted races here in Iowa.

We ran those ads in late September, in time to educate the mountain of Iowans who now vote via early ballot in the last few days of September. And let me tell you, these ads are devastatingly effective.

But as we approach the final couple of weeks before November 8, I need to ask for your help. We need to fund our final round of radio and TV ads, and we need to do it right away!

As it stands, we’re coming up short in a couple of key races.

We can’t let that happen. We can’t let Steve Sodders snowball gun owners into thinking that he’s actually pro-gun when he’s the one who killed Constitutional Carry and Stand-Your-Ground law here in Iowa!

That’s why I want to run this TV ad in Sodders’ district — check it out below! 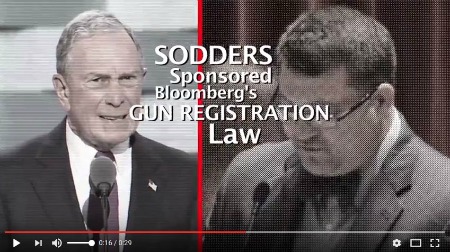 Of course, we can’t fall behind in our program in Council Bluffs either, where Senate Majority Leader Mike Gronstal is trying his best to confuse voters about where he stands.

He’s doing everything in his power to confuse gun owners in Senate District 8.

That’s why we’ve prepared this radio ad, to air all over the district — if we can fund our final push! 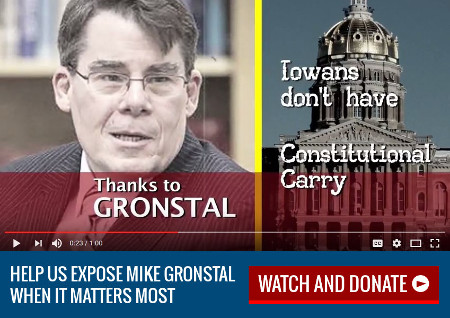 So many of you have given so generously over the last six weeks to help us run this program, it’s humbling. Whether you’ve given $5 or $500, I sincerely thank you.

We’ve paid for the mail, the slicks, the ground game, and the social media program.

Now that we’re in the home stretch, will you help us once more, to cover the cost of our final push on TV and radio?

You’ve heard and seen the ads, you know how hard of a punch that will be in these districts!

Every time these ads go up I get calls, emails, and Facebook messages from gun owners who had no idea that their legislator was anti-gun and has consistently voted against their right to keep and bear arms.

That’s why it’s vital we run this program, right up to the very end.

So please, whether you want to run one radio ad in Mike Gronstal’s district for $37.70, or want to fund a round of ten TV ads in Steve Sodders’ district for $525 – please act fast.

These spots are reserved, but we’ll lose them if we don’t fund them shortly!

Thank you — again — for all you do to fight for the Second Amendment here in Iowa.

P.S. Thanks to your overwhelming generosity, Iowa Gun Owners has run a great program so far in targeted districts all over Iowa, working to see a pro-gun majority in the Iowa Senate when the 2017 session kicks off!

But we’re still short in our TV and radio ad budget as we enter the pivotal last few weeks.

These ads are devastatingly effective and will make sure that every gun owner in these districts will know the truth about where their legislator stands.

If you want to help us fulfill our budget for these TV ads, please help us out here!

Thanks for actively fighting to defend your Second Amendment rights here in Iowa!