Fighting for Gun Rights House by House in Iowa!

Fighting for Gun Rights House by House in Iowa!

As Irish parliamentarian Edmund Burke said, “The only thing necessary for the triumph of evil is for good men to do nothing.”

That’s certainly true where your gun rights are concerned here in Iowa.

There was a time when anti-gun legislators were able to attack our gun rights in Des Moines and then tell gun owners that they were ‘with them’ with no one being the wiser.

Thanks to the members of Iowa Gun Owners, that’s not the way it works anymore.

Gun grabbers can’t operate in the shadows any longer. We make them pay for every inch of ground they try to take by exposing them to gun owners in their districts!

And while that’s especially true regarding anti-gun incumbents who are running from their record, we also work hard to shine the light on candidates who are refusing to tell Iowans where they stand on the 2nd Amendment.

That’s exactly what happened in Central Iowa yesterday as a great crowd of volunteers joined with Iowa Gun Owners’ staff as we went house-to-house to inform gun owners where the candidates in Senate District 10 stand on their gun rights.

Right now in Des Moines, anti-gunners have a 26-24 lock on the State Senate which has led to the defeat of Constitutional Carry legislation, Stand-Your-Ground legislation, and at least a dozen other pieces of badly needed pro-gun reforms.

So when a candidate like District 10’s Matt Paladino refuses to tell gun owners where he stands on the Second Amendment, we took direct action!

And for one volunteer, it was a great day as he walked away with a FREE Ruger 10/22 from Iowa Gun Owners! 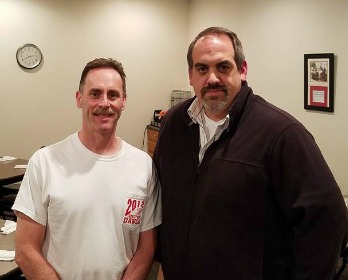 (Dennis, an IGO volunteer from Ankeny, won a free gun from Iowa Gun Owners yesterday after hitting the streets with us for a few hours!)

Will Matt Paladino back his would-be caucus member’s call for a ban on ‘assault weapons,’ which are simply modern semi-auto firearms that many of us use for self-defense? He refuses to say!

Will Matt Paladino support his would-be caucus member’s call for a statewide gun registry, established under the guise of ‘universal background checks? He refuses to say!

Would he back Stand-Your-Ground law or Constitutional Carry law or any of the pro-gun bills that are in play in Des Moines? Matt Paladino simply refuses to say!

In all my years working in gun politics, I’ve never had a candidate who refused to tell me where he stood on the Second Amendment then go on to vote pro-gun if elected.

On the other hand, Jake Chapman has stood tall for the Second Amendment over the last four years in the Senate, cosponsoring many pro-gun bills, and has signed our 2016 Gun Rights Questionnaire 100% pro-gun!

This is the information that gun owners need to be aware of, and let me tell you, after yesterday, they do! 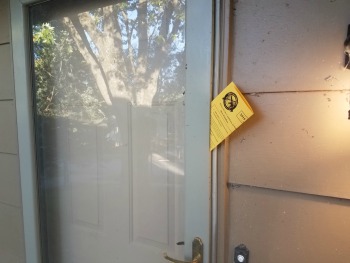 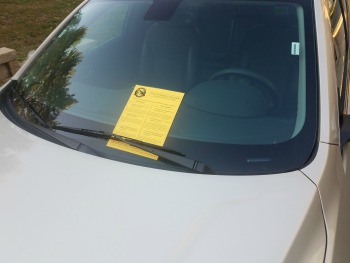 (A team of IGO volunteers blanketed Dallas, Guthrie, and Adair counties yesterday with flyers making sure that every gun owner knows where the candidates in the Senate District 10 race stand on the Second Amendment.)

Lots of groups talk a big game in the Capitol, but it’s been the members of Iowa Gun Owners who’ve given us the necessary resources to expose anti-gunners at election time — and expose them we have.

In fact, educated gun owners have seen fit to boot almost 30 anti-gun incumbents out of office just since 2010.

Dozens more anti-gun candidates never had a chance to vote against our freedoms because educated gun owners denied them elected office in the first place.

You see, this is how we hold the line on gun control in Iowa!

So if you were able to help us yesterday in District 10 — thank you!

If you weren’t, don’t worry, we have more lit drops scheduled in October.

In fact, we’re going door-to-door every Saturday in October in targeted districts and we really need your help.

Next Saturday we’ll be in Senate District 32 which includes Bremer County and portions of Fayette, Blackhawk, and Buchanan County!

Senator Brian Schoenjahn is doing his best to hide from his record, something that we’re not going to let happen!

In fact, in response to all of our TV and radio ads, Brian’s recently released a picture of himself holding a shotgun and locals are reporting that it looks like first time he’s ever held a gun!

So come join us next Saturday! Here are the details!

Meeting time: 8:30am (we’ll give you a thorough overview of the game plan, divide into teams, give you your assigned map and flyers, and be pounding the pavement by 9am.)

Duration: We’ll be passing out flyers from 9am-1:30pm.

Afterwards: We’ll meet up again at a restaurant in the district at 1:30pm and select the winner of the Ruger 10/22 rifle after a brief lunch. (Dutch treat.)

What You’ll Need: Supportive footwear, a jacket, and a bottle of water (or coffee for those of us that can’t survive without it.)

And don’t forget, one lucky volunteer will win a FREE rifle next weekend!

And if your schedule or health simply precludes you from joining us physically, I sure hope you’ll stand with us by making a donation to help Iowa Gun Owners run our program this fall!

We’re hitting gun-grabbers with everything we have including massive direct mail drops, mass email deploys, targeted social media, robo calls, lit drops, and, we hope, radio and TV ads — but we need the resources to maintain this fight.

Anti-gun legislators like Senator Sodders, Gronstal, Danielson, Wilhelm, Schoenjahn and others are going to hear the message loud and clear: there will be a price for your attacks on our gun rights — nothing happens in the shadows anymore!

As long as you and I keep exposing anti-gun candidates, as long as we fight back against their attacks, our rights will remain intact.

But the minute they sense weakness from us, the minute we don’t push back against their push for gun control, we lose ground.

That’s why we need your help.

It doesn’t matter if you don’t live in one of our targeted districts of not.

As I mentioned, gun-grabbers have a 26-24 hold on power. If educated gun owners toss out two of these politicians this election cycle, we can make major advancements for the Second Amendment!

Your support (either financial or helping us next Saturday) will determine whether we spend the next couple of years advancing our gun rights or fighting to stop additional gun control.

Either way, thank you for all that you do to defend the Second Amendment here in Iowa!

More than that, Paladino’s opponent, Senator Jake Chapman is unashamedly pro-gun and has championed IGO legislation during his last four years in the Senate.

Now, when they are asking for support, is the time to make anti-gun incumbents and candidates pay a price for attacking our gun rights.

If you couldn’t join us yesterday, I hope you’ll join us next Saturday in Senate District instead. More on that above!

If you’re unable to join us next Saturday, please stand with us by making an immediate donation!

We are working around the clock to ramp up pressure on anti-gunners in targeted districts all over Iowa — but we need the resources to maintain this fight.

Now is the time to fight back! Please do what you can!