If you’ve been involved in the fight for gun rights for more than about 5 minutes, you’ve experienced the frustration that comes when an anti-gun politician arrogantly sneers at you when you ask him/her why they voted against a pro-gun bill.

Believe me, it’s happened to me many times in the Iowa Capitol in the early days of Iowa Gun Owners.

You see, anti-gun legislators believe that they can do whatever they want in the Capitol. They think that if they vote against your gun rights you’ll not find out about it, and if you do, you’re just one angry gun owner.

Then Iowa Gun Owners came along.

Over the last 6 years, anti-gun legislators have cringed while their anti-gun votes and anti-gun statements have been exposed to the voters in their district en masse!

We take great pride in exposing these legislators through a variety of means, including:

>>>  The Iowa Gun Owners’ Facebook page – the largest Facebook page in the state, where we communicate daily to over 65,000 Iowa gun owners;

>>>  Our massive statewide email program – it’s one of the primary ways that we’ve stopped gun control in Iowa over the last two years;

>>>  Hard-hitting radio ads on WHO radio – they are running in targeted races all over Iowa, you’ve never heard more aggressive ads on the air;

>>>  Or using targeted direct mail – where we break down a legislators hostility to gun rights in vivid detail.

One way or the other, we make sure that gun owners in Iowa know where their legislators stand on the 2nd Amendment.


This is where the rubber meets the road, folks.

Other organizations complain about anti-gunners, but lack the organizational ability to do anything about it.

Some groups seem to feel compelled to defend the incumbent politician no matter what, feeling that they “trust the devil they know more than the devil they don’t.”

Frankly, we saw this in Iowa during the last mid-term elections as the establishment gun lobby endorsed then-Governor Chet Culver and a whole host of anti-gun state legislators.

These legislators, like Daryl Beall from Fort Dodge who received an “A” from the establishment gun lobby, went on to oppose every pro-gun bill we put before them since their re-election – and your gun rights suffered as a result.

That’s just not who Iowa Gun Owners is, it’s not who our members are.

We aren’t here to play games with politicians, and we certainly aren’t here to gloss over a politician’s record just to maintain our interpersonal relationships with the political class in Des Moines – something that effectively shuts down other organization’s ability to fight for your gun rights.

Using mail, emails, radio buys, and social media, we are getting the word out that attacks on our rights will result in a loud and public exposure of a legislator’s actions to gun owners in his district!

Take a look at the picture below – taken recently in the parking lot at the Iowa Gun Owners office in Des Moines. 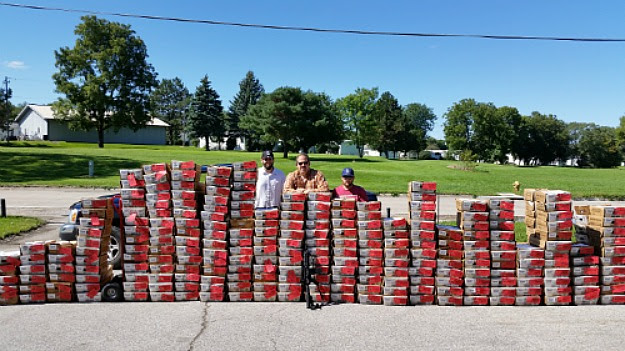 (IGO’s Executive Director Aaron Dorr (center) is flanked by volunteers who have been helping IGO prepare a massive amount of targeted direct mail that will deploy into targeted races soon, making sure that gun owners know the truth about their legislator’s record on the 2nd Amendment! We hope you enjoy the unloaded M4 in the picture, it’s for “scale.”)

Anti-gun politicians take notice: we are serious about defending our rights. You can vote with the radical gun control lobby in Des Moines, but we can guarantee that EVERY gun owner in your district will be informed about your actions.

First of all, I want to thank you.

Not a piece of this mail would move out the door if you didn’t pay for it.

Every penny of this program is funded by gun owners right here in Iowa.

It’s the same with our hard-hitting radio ads, our focused internet programs designed to expose anti-gunners online, and it obviously applies to our large email program – this is your money being put right to work in Iowa in a fierce fight to defend the 2nd Amendment.

But I also must ask for your help.

The mail you saw above is just a portion of our 2014 Election Program.

There are many more anti-gun candidates out there who are refusing to complete our candidate survey because they don’t want to go on the record against your gun rights – not to mention other incumbents who are trying to hide the actual votes that they’ve cast.

We simply must expose them to the gun owners in their district!

But right now, I’ve basically spent every penny that we’ve allocated for our 2014 program. That’s why I need your help.

Your donation of $50 will enable me to get 111 pieces of targeted mail out the door.

Or, for $50, I can run targeted Facebook ads in a State Senate race for over a week – reaching out to over 7,500 pro-gun Iowans! Think of the impact of 7,500 gun owners who learn that their legislator supports gun control.

Or, for your immediate donation of $50 I can just about get two additional radio ads up on the air.

This is your money – going directly to the fight for our right in Iowa.

It’s critical we act now. When gun owners are informed and educated about where their legislator stands, about how he’s voted in office, they take action.

If we don’t, then gun grabbers will think they can attack our rights with no consequence.

I know we’ve asked a lot of you recently. But as I said above, this is where the rubber meets the road.

When the candidates are circling around looking for votes and money, we simply must inform gun owners about the truth.

What we do here will set the stage for the next two years in our fight for the 2nd Amendment. That’s why I hope you’ll be generous – and quick – we are running out of time to get more of this information out to gun owners.

P.S. The picture above shows the power of grassroots activism as tens of thousands of pieces of mail are being prepared to go out in targeted districts across Iowa as IGO exposes the records of anti-gun politicians all over Iowa.

These legislators hope that they can work against the 2nd Amendment while in Des Moines without gun owners back home finding out. We won’t let that happen.

While other organizations complain, talk, and whine about gun grabbers, IGO is actively bringing the fight to them with mail like you see above, Facebook ads in their communities, statewide email deployments, radio ads and more!

Please help us keep this up, as we’re rapidly running through our budget and have more districts in which we need to educate and mobilize gun owners.

$100, $50 or even just $25 will enable us to get that much more mail, radio ads, and Facebook ads rolling. Please do what you can, just do it today, time is of the essence.