In case you missed it, the Senate Judiciary Committee ‘tabled’ Constitutional Carry in a hearing earlier this week — because they were a vote short of passing the bill.

One of the Senators who refused to support Constitutional Carry was none other than Dan Dawson, who replaced Mike Gronstal in Council Bluffs back in 2016, thanks to gun owners!

Now Dawson is lashing out at gun owners who are holding him accountable, while hilariously trying to claim that Iowa Gun Owners is lying about his record.

But as you can see in our video response, Senator Dawson broke a written campaign promise. Check it out here. 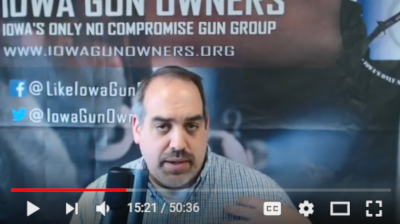 As you just heard, Senator Dawson received massive amounts of help from gun owners in 2016, only to betray us when we needed him the most.

And far from apologizing for his actions, Senator Dawson has the gal to lash out at gun owners!

What an arrogant, smug little man.

But as you heard in the video, this fight is not over, as we have until NEXT THURSDAY to advance this bill through the Judiciary Committee!

So contact Senator Dawson immediately, using the information below, and insist that he use his position as the Vice-Chair of Judiciary to help move the bill along!

And please also take a moment to share this email and video with every gun owner you know!

Two states have already passed Constitutional Carry into law this year, and a third (Kentucky) may join those ranks any day!

It’s time that Iowa lawmakers stop talking the talk, and start walking the walk for gun owners. And that starts with Dan Dawson!

And just to make these moderates mad, feel free to chip in $50, $25 or even just $10 to help us fight for Constitutional Carry law in Iowa!

P.S. After breaking his written campaign promise and betraying the largest voting bloc in his district, Senator Dan Dawson is now lashing out at gun owners in desperation.

Check out our video reply to Senator Dawson, and the other Senators who are doing everything they can to clamp down on Constitutional Carry — while other states are passing it all around us.