Give Up Your Guns or Move: An Iowan Has a Terrible Choice to Make!

Give Up Your Guns or Move: An Iowan Has a Terrible Choice to Make! 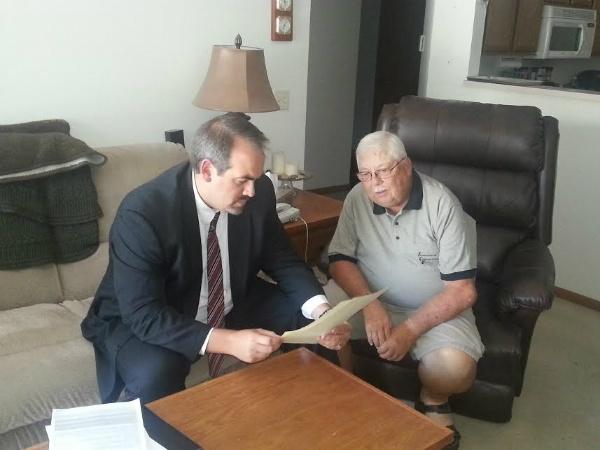 Iowa Gun Owners is sharing an important alert from our sister organization, the Iowa Gun Owners Foundation. We hope you’ll read this and take immediate action.

Can you imagine waking up one day to find out that you’ll be forced to move out of the apartment you’ve been renting for ten years – because you own a firearm for self-defense?

But it’s not – this discriminatory action is playing out in real time over in Council Bluffs as I type this! This situation is urgent, so please read this email carefully and take action right away!

Here’s what we know.

Mr. Ballard, on a fixed income, has lived in the Highclere Apartments since August 1, 2004, as a model tenant. In fact, his property manager recently gave him a letter wherein she stated:

Louis Ballard has been a resident of Highclere Apartments since August 1st, 2004. During his time here he has had zero late payments, returned checks, or lease violations. Please feel free to contact the Highclere office for more information.

Yet despite ten years of being a perfect tenant, the Highclere Apartments, which is managed and possibly owned by Robert Hancock & Co. in Omaha, NE, have issued Mr. Ballard, and presumably every tenant that rents from them a terrifying ultimatum: give up your guns, or get out of your apartment.

At first I didn’t believe this when I heard about it.

Having spent close to 6 years working in gun rights politics here in Iowa, I thought I’d seen it all when it comes to people trying to clamp down on our gun rights in the legislature.

Of course we’ve all seen certain businesses that ban guns on their property too – but I’ve never heard of someone having to leave their residence because they wanted to possess a firearm for self-defense!

So late last week, I drove over to Council Bluffs to meet with Mr. Ballard in his apartment and examine the documents personally.

The results stunned me!

Tucked into the midst of a four page, fine print legal-sized lease agreement is a new section which states:

Firearms are prohibited in any location on the premises including the common or other areas of the property. Firearm shall mean any weapon which is designed, or which may readily be converted, to expel a projectile by the action of an explosive substance. This restriction shall not apply to any Federal, State, or Local law enforcement officer.

There were no exceptions for self-defense.

There was no exception for hunters.

There was no exception for sport shooting.

The message from Robert Hancock & Co. to gun owners is clarion clear: surrender your guns or get out! 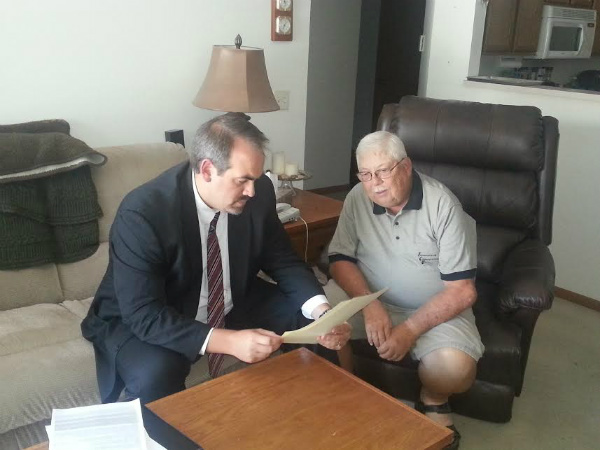 (Chairman of the Iowa Gun Owners Foundation Aaron Dorr, at left, examines leasing documents in the home of Louis Ballard last week. Mr. Ballard has to surrender his guns or leave his apartment of ten years unless we can help him!)

I have to tell you – I was downright mad when I read this leasing language.

No one would dream of telling a person that they had to forfeit their right of free speech or freedom for religion in order to keep their apartment (1st Amendment.)

Likewise any property leasing company who tried to make you give up your right of not being searched by a police officer without a warrant based on probable cause (4th Amendment) would be vilified in the press.

Certainly Mr. Ballard couldn’t be made to leave based on his race or sex.

Yet somehow, Robert Hancock & Co. thinks that they can eliminate their tenant’s right to own firearms (2nd Amendment) simply because they want to.

That’s why you need to act fast to help the Iowa Gun Owners Foundation protect Mr. Ballard’s rights. More on that in a minute.

After I left Mr. Ballard’s home last week I went into Omaha to attempt to speak with John Hass, President of Robert Hancock & Co.

I was hoping to speak with him face-to-face and figure out what it was going to take to allow Mr. Ballard to remain in his apartment.

But John Hass refused to speak with me at all. In fact, he wouldn’t even let my staffer and me in the door! Instead he told us to speak to his lawyers. 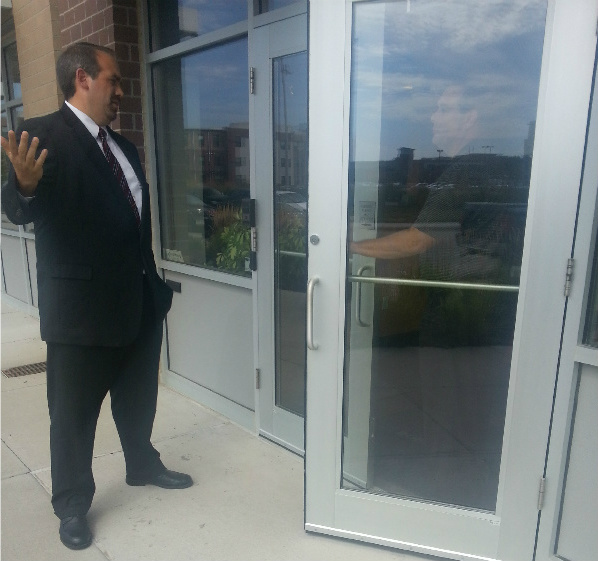 (IGOF’s Chairman, Aaron Dorr, attempting to have a conversation with Robert Hancock & Co.’s President John Hass who hid in the doorway, about why his company is booting a senior citizen out of his apartment simply because he owns firearms for self-defense. Sadly, Mr. Hass arrogantly refused to speak with us – and referred us to his lawyers.)

This is exactly what the Iowa Gun Owners Foundation was founded for folks!

As I spoke to Mr. Ballard it was obvious that we need to get involved, and fast, as Mr. Ballard has to quickly make serious choices. Honestly, he’s in a bind.

While he likes where he lives, there have been cars stolen nearby, and cops have reportedly had to respond to drunks trying to kick in the community door in his building while yet another drunken domestic violence offender heavily damaged a nearby apartment!

Being disabled, Mr. Ballard is exactly the type of person who needs a firearm for self-defense, especially since he was told that the average police response time to the Highclere Apartment complex is 14 minutes!

On the other hand, he lacks the means to hire lawyers and fight with a multi-state leasing firm that wants gun owners gone.

Since I’ve left Omaha, I’ve been working the phones with pro-gun lawyers in the Council Bluffs/Omaha area to see what’s possible.

Even to have the research done in this case is expensive – and that’s at the “friend rate.” While we’re too early in this process to know what strategy should be pursued, I know we have to get ready. Fast.

Please consider a generous contribution to the Iowa Gun Owners Foundation right away! Whether it be $250, $100, $50 or some other amount – every penny will help – just please make your decision right away.

Donations to our legal foundation are different than those made to our non-profit organization. Every penny you donate to the Foundation is tax-deductible! At the end of the year you’ll receive forms from us that you can use in your tax preparations.

In addition to your financial assistance, please take a moment to call John Hass, President of Robert Hancock & Co. and insist that they reverse this discriminatory policy immediately before more law abiding citizens have to make this terrible choice of leaving their homes or surrendering their firearms.

I hope you’ll get involved IMMEDIATELY by calling his office at 402/393-2210 or 402/391-2885. This company owns many complexes like this throughout Council Bluffs – so many gun owners may be affected by this unless we get involved.

Please send this email to every gun owner you know in Iowa or Nebraska as it affects gun owners in both states.

If a retiree, who’s disabled, with no criminal history besides a traffic ticket, who has concealed carry permits in 3 states can be treated like this – then you can too. That’s why I hope you’ll help me fight this abuse as aggressively as possible. This is unconscionable, and we must act at once.

Please consider your tax-deductible gift to the Iowa Gun Owners Foundation right away!

I’ll be sure to keep you informed on this developing situation.

P.S. Louis Ballard Sr. is facing a choice that no law abiding American should ever face: surrender your guns or leave the apartment you’ve called home for over ten years!

That’s right, Robert Hancock & Co., the firms that manages the Highclere Apartments in Council Bluffs is inserting language, for the first time, in their lease agreements that bans the possession of defensive firearms, period! 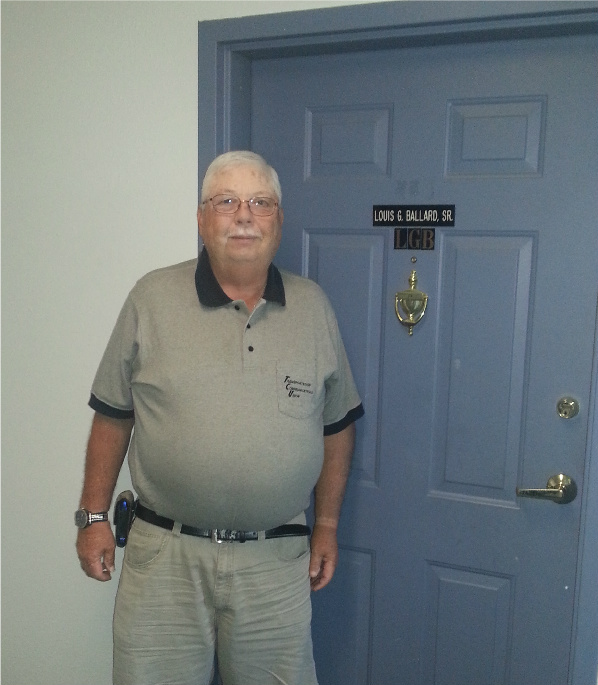 (Louis Ballard, outside of the apartment that he’s lived in for over ten years. Ballard has to surrender his gun rights in order to stay there.)

After spending time with Mr. Ballard last week examining his lease documents, reference letters, and more, I have to tell you I’ve never seen such shocking actions in Iowa.

That’s why I’m hoping that the Iowa Gun Owners Foundation can take up Mr. Ballard’s defense.

But we need more funds to do this. The good news is that as a 501c3, your contribution to the Foundation is tax deductible. Please make your most generous contribution of $250, $100, $50 or some other amount right away!

Second, I hope you’ll IMMEDIATELY call Robert Hancock and Co.’s office at 402/393-2210 or 402/391-2885. Ask for the President, John Hass, and insist that he back down from this wildly anti-gun language in his company’s lease agreement.