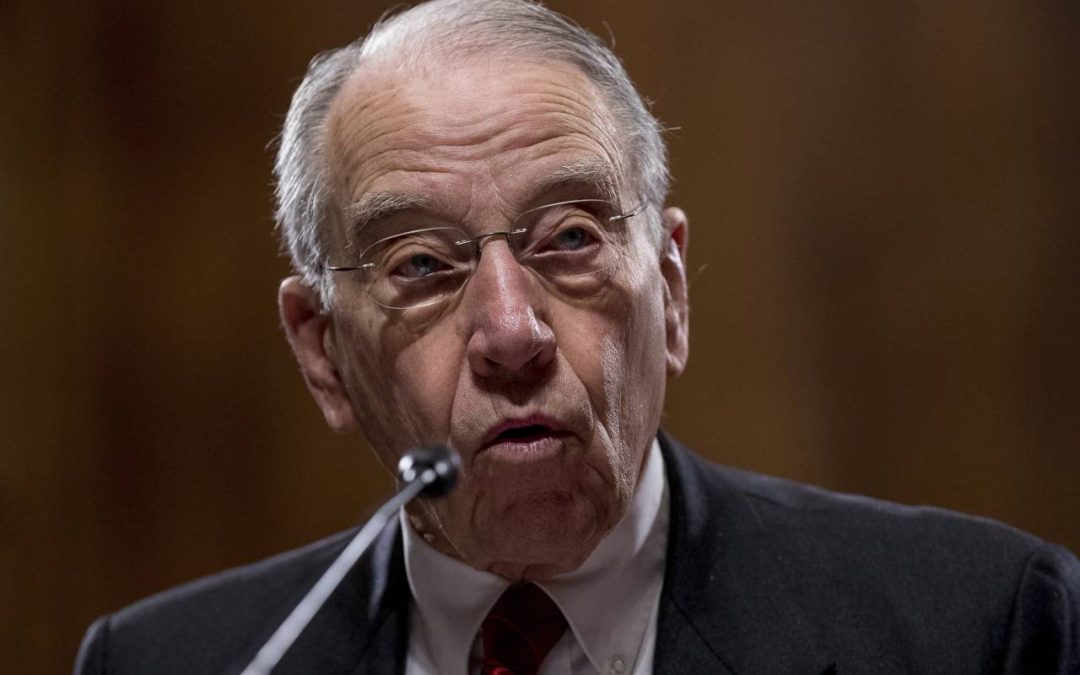 With the Senate set to go back into session in just a few weeks, pressure is mounting on Republican lawmakers to endorse ‘Red Flag Gun Seizure’ legislation.

As you likely know, Iowa Senator Chuck Grassley has already caved under the pressure and has endorsed this proposal in a shocking betrayal that has gun owners seething from Doon to Kalona!

Insiders have told us that Grassley came out in favor of this bill because he hoped it would quiet the clamor for gun control.

If true, this would be the silliest political calculus of Grassley’s career, as the radical left has only increased their demand for radical gun control!

In fact, Chuck Schumer, the Democratic Minority Leader, went so far as to suggest that his caucus may filibuster any ‘Red Flag Gun Seizure’ bill that did not also contain ‘universal background check’ legislation!

And other Senators are demanding passage of legislation that would ban the AR-15, magazines that hold over 10 rounds of ammunition, and more!

Simply put: Senator Grassley’s decision to back this disastrous legislation has blown up in his face and is now being used to browbeat other Republican lawmakers into supporting the same legislation!

Naturally, Iowa’s remaining Senator, Joni Ernst, has come under intense pressure from the gun control lobby at the state and federal level, as they demand she back this legislation, too.

In fact, at a town hall forum Senator Ernst held in Polk County over the weekend, over half of the questions were about gun control!

And while Senator Ernst has not endorsed ‘Red Flag Gun Seizure’ legislation yet, her comments about mental health check ups for gun owners were very alarming.

Both of your Senators need to hear from you immediately.

That’s why I’ve assembled a brand new action item with a new message to Senators Grassley and Ernst that I hope you will send to them immediately.

Our message is clear: you can’t stop a committed killer by passing gun control. It will never work. All you’ll do is disarm law abiding Americans and bring this nation that much closer to outright socialism!

If you agree, please contact Senators Grassley and Ernst by:

If Republican Senators from a state like Iowa give in to the demands of the radical left by supporting gun control, then who will stand against it?

It’s vital that Senator Grassley change course and that Senator Ernst take a loud stand against this legislation.

After you’ve taken action, please forward this email to every gun owner you know and urge them to get in this fight as well.

Finally, please make a donation to Iowa Gun Owners to help us keep this digital ad running all over the state!

P.S. The fight for gun control is raging!

Email Senators Grassley and Ernst right here, insisting that they stand up and FIGHT for gun owners!

As your constituent, I am writing to insist that you VOTE NO on any gun control bills that come before you during the fall session.

Disarming law-abiding citizens won’t do anything to stop violent crime, as no amount of gun control will be able to stop a committed killer who ignores the law anyway.

The bills before you are terrible policy for every law abiding American.

Red Flag Gun Seizure laws obliterate the concept of ‘innocent until proven guilty’ and force a gun owner to defend himself AFTER his firearms have been confiscated and after his Second Amendment rights have been suspended.

And this all happens before he’s ever been convicted of a crime!

Universal Background Checks are nothing more than a guise for a national gun owner registry, as it would make felons out of anyone who sells or gives a firearm to someone without first receiving government permission.

And with virtually every mass shooter of the last ten years buying his firearms after first going through one of these checks, it’s obvious that they are useless at stopping crime.

Similarly, any effort to ban the AR-15 would do nothing to stop violent criminals who would ignore such a ban and find these firearms someplace else.

At the same time, law abiding citizens would be denied the use of the best firearms available for use in defense against criminals and tyrants!

The bills before you are also terrible for the country, politically, as well, as passing any of them only heightens the call for gun control from the far left.

You can’t please gun grabbers; they will always oppose you.

The question is, will you also anger pro-gun Iowans like me, by supporting radical gun control?

To me the choice is clear. Please vote NO on all forms of gun control, regardless of who is sponsoring the legislation!