My jaw about hit the floor when I watched his interview on Iowa Press just last week. . .

You see, under the leadership of House Speaker Pro Team Matt Windschitl (R-Harrison County,) House leadership has all but KILLED any hope for Constitutional Carry this session.

Of course, I knew State Rep. Windschitl was the key voice in the Iowa House convincing the State Senate to stop the Committee vote on Constitutional Carry in the days following the horrific Parkland, Florida shooting.

But the news that he’s now openly working with the Iowa House’s most aggressive gun-grabbers and intends to hand them a victory on GUN CONFISCATION shocked even me!

That’s why I’m counting on your IMMEDIATE action.

Won’t you please sign your ‘NO RED FLAG ORDERS GUN CONTROL PERIOD!’ petition, and submit it back to me right away? More on that below.

As you’ll see, your petition insists that your State Representative votes “NO!” on any gun control scheme to come before the House floor.

Without your action, I’m afraid we could be headed for a major reversal in our fight for the Second Amendment in Iowa.

You see, just recently, Speaker Pro Tem Windschitl came out publicly in favor of gun confiscation in certain situations, through the so-called “red flag orders” I’m sure you’ve heard so much about in recent weeks. 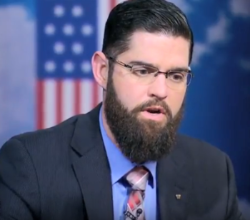 But there are some dirty secrets the gun-grabbers and their pals in the media never dare to mention about these so-called “protective orders.”

You see, the majority of these schemes allow for ex-parte hearings -– meaning your guns could be seized with ZERO due process simply because someone complains about you.

And we likely all know someone with a crazy ex-spouse or former boyfriend/girlfriend who has had to deal with their share of false allegations -– imagine how they could abuse these “red flag orders” in advance of a nasty custody dispute!

Once your guns are seized, you’ll be spending weeks, not to mention thousands of dollars in court in attorney’s fees, to try and get them back.

And if some anti-gun judge or prosecutor just doesn’t like you, your goose could be cooked.

Help us stop this bill dead in it’s track, sign your petition against ‘Red Flag Orders’ gun control right away!

Some might ask, won’t these “red flag” seizures help law enforcement stop madmen who are prepared to kill?

Under current law, those who tell others of their intent to kill can be arrested for making threats if law enforcement is informed.

Those who are exhibiting “warning signs” that they may be planning violence, can — at minimum — be interviewed by law enforcement who can move to arrest the person if they deem it necessary.

As a former cop, I can’t tell you how much you can learn about a person’s intentions just with the answers to a couple questions.

But as a former cop, I can also tell you that no gun control law on the books will ever do a lick of good if law enforcement fails to do its job — like we saw at Parkland.

Gun-grabbers know that.  But they don’t care.

Their goal with these “red flag” orders is to frighten those of us who own guns from speaking out about our beliefs for fear of having our guns seized.

It’s also to begin normalizing GUN CONFISCATION as a part of American life!

Help us stop them, by signing your petition in opposition to ‘Red Flag Orders’ gun control TODAY!

And if State Rep. Matt Windschitl gets his way, this Constitution-shredding madness could be coming to Iowa!

He’s already announced that he’s working to combine votes from BOTH sides of the aisle to RAM this scheme into law.

And with the legislature going into overtime in Des Moines over what could be a protracted budget fight — and with Gov. Reynolds publicly calling for more gun control after Parkland –- everything is on the table right now!

Without your IMMEDIATE action, I’m worried Rep. Windschitl may just succeed in handing gun-grabbers and their pals in the media here in Iowa a big victory in the waning hours of this session.

That’s why I’m counting on you to please sign and submit the petition that we’ve prepared for you, to your State Representative at once.

And if at all possible, please also agree to your most generous contribution to help Iowa Gun Owners:

2)   Use email, social media and Internet ads to mobilize an additional 50,000 Iowa citizens;

3)   Work the blogs and grant media interviews to explain to law-abiding gun owners the stakes we face;

4)   Pay for hard-hitting radio, newspaper and even TV ads if I can raise the resources.

A program this large isn’t going to be cheap.

But I’m afraid it’s the ONLY way you and I are going to stop State Rep. Matt Windschitl’s gun control freight train.

The good news, is that 2018 is an election year.  And politicians always listen more closely to the folks back home when they’re asking for our votes.

So if you and I can raise enough of a ruckus, we can tell State Rep. Matt Windschitl to take Bloomberg’s so-called “red flag” scheme and stuff it.

Of course, I can’t do any of this without your action and support.  Since Iowa Gun Owners’ formation in 2009, not one gun control bill has passed into law.

That’s only because of the action and support of good folks like you.

So I’m coming to you once again for your help.

In addition to signing your petition, please agree to a generous contribution of $100.  I know that’s a lot, but please consider giving that much if you can.

Whatever amount you can afford, please do what you can today, your support can make all the difference.

Please sign your petition, and submit it to me along with your most generous contribution of $100, $50 or at least $25 TODAY!

P.S. Under the leadership of House Speaker Pro Tem Matt Windschitl (R-Harrison County,) House Republicans have all but KILLED any hope for Constitutional Carry and are now moving on to gun control!

We have to FIGHT BACK.

When you’re done, please consider making a generous contribution of $100, $50 or at least $25 TODAY to help us mobilize as many gun owners as possible!