Hubbard: Out With a Whimper

Hubbard: Out With a Whimper

In the end, it went out with a whimper.

A month ago, the local newspaper screamed the headline: Hubbard Pursues Gun Ban.

But last night, after a solid week of calls, emails, in-person visits, and Facebook messages – Hubbard City Mayor Marshall Simmerman didn’t have the stomach to follow through with his plan to ban all firearms on city property and didn’t even put the item on the agenda!

Of course, this was done for multiple reasons.

You see, there are two ways these anti-gun proposals can go. The council can go ahead with the vote to ban guns, putting everyone on the record, and letting the chips fall where they may.

That’s what has happened in towns like Tama, Dubuque, and others where we’ve defeated these proposals with a record roll call vote.

The other option that more and more councils are taking these days is the coward’s way out.

They simply remove the proposed language from the agenda before the meeting – after being flooded with calls and emails – knowing that if ANY of the members vote for the ban it may cost them their local seat.

Then, in a sad and desperate political move, the local officials try to tell people with a straight face that, “We were never trying to go after your gun rights, not us, we’re all friends here – this was just an idea but we were never going to let it go anywhere.”

Of course, then they toss in the all-to-familiar line about, “We are so sorry that you have been misled and showed up here for nothing.”

That’s exactly what happened last night in Hubbard as over 50 gun owners packed the council chambers (with many more out in the hallway unable to even cram into the room) ready to fight for their gun rights.

(Standing room only last night, plus many more stuck in      the hallway, as tons of gun owners showed up to defend their gun rights in Hubbard!)

Mayor Marshall Simmerman knew he had a problem on his hands as the calls and emails began pouring in last week.

When he got to the meeting last night and saw gun owners lining the council chambers and the steps leading into them – he knew he had no choice but to throw in the towel.

Here at Iowa Gun Owners, we don’t care if they pull the gun ban from the agenda beforehand or vote it down at the meeting – we just want them to leave our gun rights alone.

That’s exactly what happened in Hubbard.

As always, this is only because of you!

Your calls, your emails, your messages to the council members of Facebook, your volunteer hours that enabled Iowa Gun Owners to pass out flyers to every home in Hubbard last weekend – it’s because of your efforts that we’ve stopped yet another gun ban proposal! 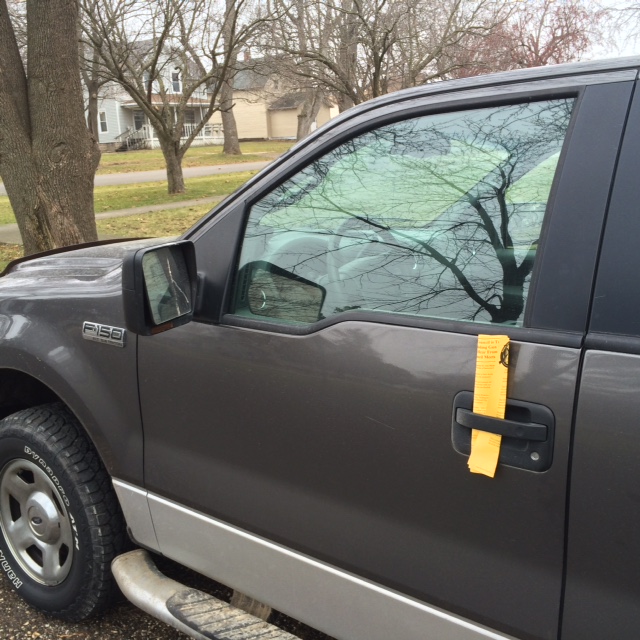 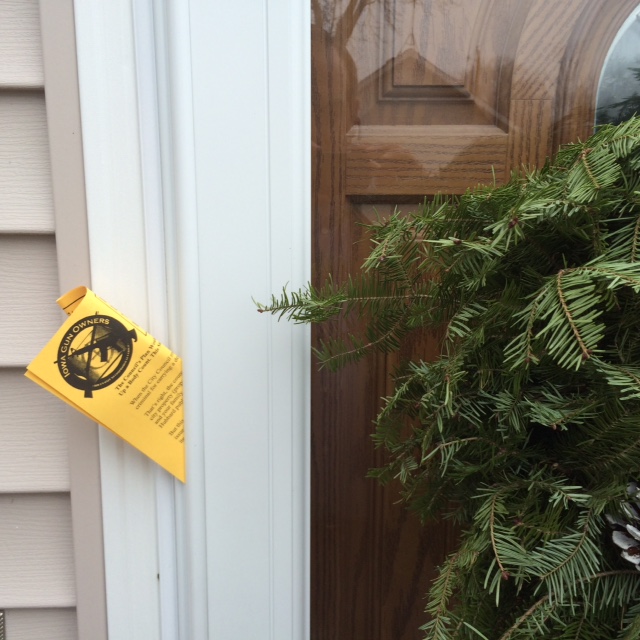 (Iowa Gun Owners’ staff and volunteers went house-to-house passing out flyers in Hubbard over the weekend, alerting everyone in town to this quiet attack on their rights.)

We can’t thank you enough.

Hubbard joins towns like North Liberty, Kalona, Nevada, Tama, Dubuque, West Chester, George and others who’ve tried – and failed – to ban your right to defend yourself on property that your tax dollars pay to purchase and maintain!

Again, thank you for rallying to the call yet again. Iowa Gun Owners members in Hubbard wanted us to convey their thanks for your standing up with them in their moment of need as well.

This is why Iowa Gun Owners exists!

Whether it be shining the light on gun control schemes in a Senate Committee room in the state capitol, to blocking gun bans in small towns like Hubbard – we are here to defend your rights.

We don’t care about making friends with anti-gun politicians or getting invited to the next lobbyist cocktail party on Grand Ave. – we represent you and fight for your right to keep and bear arms.

For all of you who’ve renewed your membership in Iowa Gun Owners as we head into what will certainly be a jammed-packed 2016 – I can’t thank you enough.

If you’ve not yet had time to do this, please consider renewing your support today!

Having and maintaining the tools we need to mobilize and activate legions of gun owners into standing for their rights can be expensive.

We’ll need to be able to mobilize every gun owner we can if we’re to be successful in 2016.

So again, if you’ve already renewed for 2016, thanks! If not, please do it right away!

In the meantime, thanks for helping us stop yet another local gun ban.

P.S. Hubbard Mayor Marshall Simmerman took the easy way out last night, by pulling his draconian proposal to ban guns on all city property off the agenda before last night’s meeting in Hubbard – ending this attack on your rights for the time being.

It’s a good thing he did, for his political sake, as over 50 gun owners packed the room last night in Hubbard in defense of their right to keep and bear arms!

All of the credit for this goes to you.

Your calls, emails, and in-person conversations with the council ensured that this gun ban went absolutely nowhere – just like the last dozen or so attempts that you’ve stopped in other towns!

Thank you for again rallying to the fight and stopping this attack.

If you’ve not yet renewed your membership in Iowa Gun Owners for 2016 – please consider doing so right away so that we can be prepared for the challenges that are coming next year.