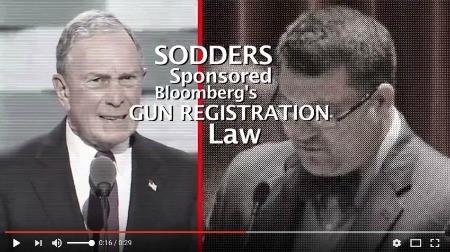 I know that we’ve been putting alerts in your inbox around the clock over the last couple of weeks, as we enter the final 2 week phase of the 2016 election season.

Our programs to expose anti-gun legislators in targeted races all over the state are running at close to full tilt.

Every weekend for the last month, I’ve been privileged to leads teams of IGO volunteers as we go house-to-house in our targeted districts passing out flyers making sure that everyone knows the truth about what their legislator has done in office.

Our mail program is fully funded and is going to be dropping into the mailboxes of gun owners on schedule. So will our ‘slicks.’

Our targeted social media program is on schedule and fully funded.

If you were one of the countless IGO donors who helped make this possible, I can’t thank you enough!

But I desperately need your help to fund our last minute TV ad buy that I hope to launch in the next couple of days.

These ads are absolutely devastating and do their main job: exposing incumbent legislators for being the anti-gun legislators that they are!

This is information that they are desperately trying to keep in the dark.

This is the kind of information that has ‘retired’ dozens of anti-gun legislators in races where you and I exposed their record of supporting gun control to the gun owners in their districts over the past few election cycles here in Iowa.

But Mike Gronstal and his pals are learning from all of their defeats.

And while they’re not backing away from trying to enact gun control here in Iowa, they are trying to counter our message to gun owners in targeted districts by overwhelming them with TV ads.

The bottom line is that TV ads work.

They are seen by massive numbers of people and are a powerful audio/visual tool that can have a devastating impact if deployed at the right time.

Gronstal and his pals are betting on their ability to dump so many TV ads into these races over the next two weeks that our other methods of communication with gun owners will simply get lost in the noise.

That’s exactly why I’ve worked with our media folks to work up a series of TV ads that we want to run in key districts in Iowa over the final week of this election season.

Check out the ad we plan to run in Steve Sodders’ district!

While you’re at it, check out the ad we will be rolling out in Senate District 32, too! 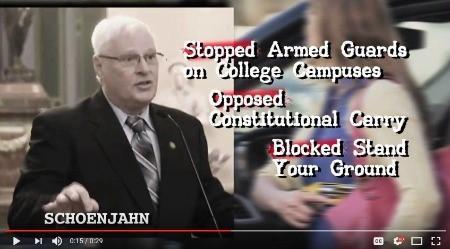 There are more ads in the final phases of production right now too, set to run in additional districts — if I can raise the funds.

I hope you’ll consider making a major investment in this program right away!

Here’s what I think we’re facing if the anti-gunners maintain a lock on the State Senate:

Don’t take my word for it, look at what Assistant Senate Majority Leader Matt McCoy said in the Des Moines Register this summer, about his plan to push for a ban on AR-15’s next session:

“I see no reason why the average Iowan needs to have these assault-style weapons … And so I would obviously like to see Congress pass a national ban. But until they do so, I think a statewide ban is appropriate.”

These anti-gun zealots aren’t backing down!

The question is, will you?

If you and I don’t hammer back against these aggressive and in-your-face gun control pushes, I can promise you that the cry for gun control in the legislature will only increase.

Frankly, watching the way House leadership caved this session by agreeing to a database of all permit holders in exchange for some minor pro-gun reforms doesn’t leave me 100% convinced that they’ll rise to stop any gun control proposal launched in the future.

Our gun rights — and those of our children and grandchildren — are going to be decided based on what you and I do to oppose gun grabbers every time they try to pass legislation like this.

If they feel no heat, they’re going to continue — it’s as simple as that.

Help us send a message to the anti-gun senate majority: if you mess with our gun rights, you will be held accountable!

I can’t promise you that gun owners will rise up in these districts and boot these gun-grabbers out of office.

They sure have in the past, as now almost 30 anti-gun incumbents have been removed from office by educated gun owners. But we don’t know the future.

What I can promise is that these anti-gun legislators are NEVER GOING TO FORGET the political pain they feel as they get hammered in their districts one TV ad at a time.

This will also serve as a loud reminder to every gun grabber in the Senate that the members of Iowa Gun Owners will never tire, we’ll never back down, we’ll never cut a deal to protect your political hide, and that we will be there — in their district — at the right moment to make sure that everyone knows where they stand!

So please help us by sponsoring as many of these TV ads as you are able.

These ads cost an average of $52.50 and reach tens of thousands of people.

Think of how many gun owners you can alert by buying one ad. Think about what damage you could do to Sodders or Schoenjahn if you personally rolled three of them?

Others, so angry at the Iowa Senate for killing Constitutional Carry and Stand-Your-Ground law over these past two years, have already locked in their support for a full ten ads!

Please dig deep, and please help me send the message that you and I will always be here to hold these legislators accountable by selecting the number of ads you want to sponsor below.

Thank you, in advance, for giving me the ammo I need to fight back for our Second Amendment rights!

I’ll be sure to let you know when these ads are up and running!

P.S. As we enter the final two weeks of the campaign season, the Iowa Gun Owners election program is running on all cylinders as far as our mail, ‘slicks,’ email, and social media programs are concerned.

But Senate Majority Leader Mike Gronstal and his cronies are going to try to blanket Iowa with TV ads in the last ten days, trying to drown out the truth about their record of backing gun control!

That’s why Iowa Gun Owners needs to go up on the air as well — to make sure that gun owners know the truth!

If we don’t stand up to these anti-gunners now, their attacks will only increase!

I’ve include a sample of the TV ads that we hope to have up on the air next week!

Please stand with us today by sponsoring as many of these ads as you can!