Iowa Senate Democrats: Republicans Doing Our Work for Us!

Iowa Senate Democrats: Republicans Doing Our Work for Us! 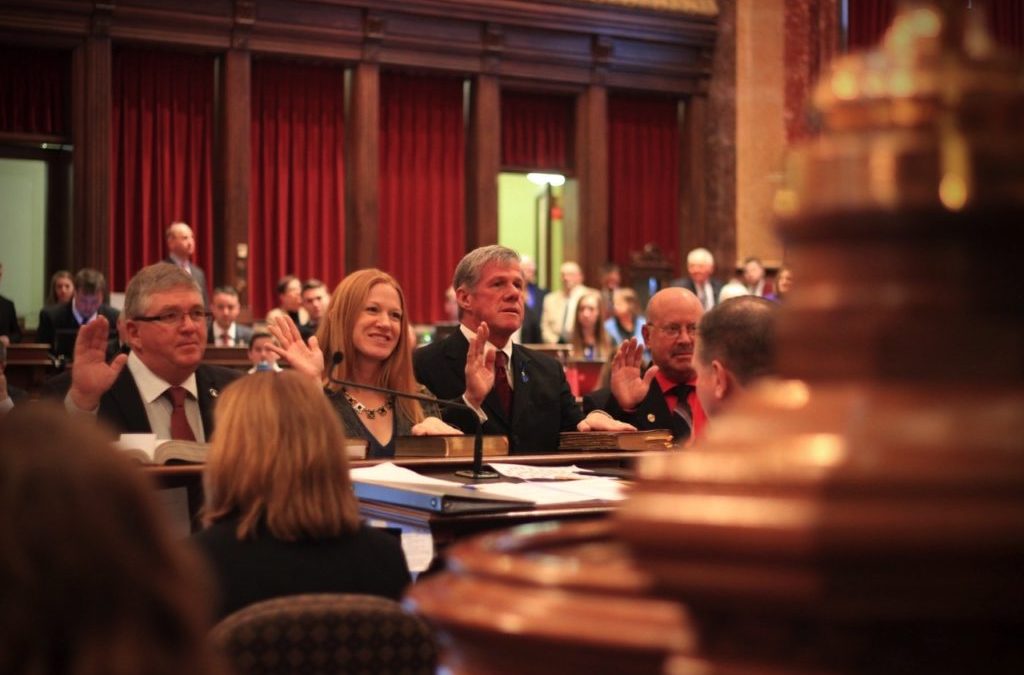 I spent most of Monday afternoon in the Capitol, meeting with key lawmakers asking them why they were holding up Constitutional Carry legislation.

(If you’ve missed our previous updates and need to get caught up, you can read this, this and this.)

As I walked from the back of the ‘well’ (the area behind the Senate floor) down to the first floor to cut a live video update, I bumped into a Senate Democratic staffer.

As he passed me, he smirked and said, “This is hilarious, Senate Republicans are doing our job for us on the gun bill by trying to kill it in committee.”

You see, Michael Bloomberg gave Senate Democrats $250,000 last fall to make sure they would FIGHT against Constitutional Carry when it came up for a vote.

But as it stands now, that was money Bloomberg didn’t have to spend, as Senate Republicans are doing everything they can to keep the bill from coming up for a vote!

Senate Republicans are the ones locking down Constitutional Carry in the Judiciary Committee.

Senate Republicans are the ones attacking gun owners who dare to hold them accountable, even in cases where their caucus members broke a written campaign promise.

Senate Republicans are the ones who are trying to run out the ‘funnel clock’ in a desperate attempt to avoid heat from gun owners.

Senate Republicans are the ones who are even attacking Iowa Gun Owners, the group whose members put them into the majority in the first place!

And that’s why Bloomberg and his allies in Des Moines are laughing right now — because the lawmakers who are supposed to be fighting for gun owners are now fighting with gun owners!

This is simply outrageous.

These people work for you and me.

They are our employees!

Constitutional Carry is the hottest gun rights issue in the state right now, with almost 20,000 emails having been sent into the Capitol this session in support of the bill.

For Senate Republicans to tank this bill is nothing short of a political middle finger to every gun owner in Iowa, who gave them their majority in the first place.

If you agree, please send a PRE-WRITTEN EMAIL to the members of the Senate Judiciary Committee right away, insisting that they advance S.F. 165 now!

(Remember, this pre-written email only works if your Senator is on the committee. If this email doesn’t work for you, feel free to cut and paste the email from the base of this email and send it to the committee members manually.)

We are very low on time to advance this bill through our primary method. So please take action right away!

Remember, we don’t care how pro-gun they claim to be.

We don’t care about what they claim to have done in the past.

We care about action! They have the votes to move this bill, and we want it done right away!

We have two days left for the Judiciary Committee to advance this bill. So please send them this PRE-WRITTEN EMAIL right away, demanding action on this bill.

And if the system won’t work for you because your Senator is not on the committee, you can cut and paste using the information below!

(Pre-written email here, and the list committee members who need to hear from you are below.)

I am beyond sick and tired of the Republican caucus playing games with Constitutional Carry legislation. With the funnel deadline fast approaching, I expect quick work on S.F. 165 this week!

Gun owners are the reason why your caucus has the majority today in the Senate.

You know it, I know it, and every gun owner in Iowa knows it. Despite this fact, you are allowing your caucus members to sit on this bill in the Judiciary Committee just like you did last year.

Worse, you are allowing caucus members like Senator Dan Dawson to break written campaign promises, while he arrogantly fumes at gun owners who email/call him out on it.

(Which is astounding, as he’s up for reelection next year and has a 136-vote Democratic registration disadvantage in Senate District 8!!!)

And worst of all, while three states have passed Constitutional Carry in just the past two months, gun owners in Iowa are on the verge of being passed over yet again.

Gun owners will not accept throwing out Mike Gronstal and his Democratic caucus for blocking this bill, only to have you and your Republican caucus do the exact same thing!

Your caucus will be asking gun owners for help in 2020, as you always have done. Rest assured that before you get my vote, my donation, or my volunteer time, I expect to see this bill passed through your chamber this session.

Lawmakers all over the country are fighting for gun owners, while lawmakers in your caucus are doing little more than fighting with the voters and organizations that have given you the very majority you enjoy.

I expect to see committee action on SF 165 this week, and I expect to see the full Senate pass this bill through your chamber and send it to the House soon.