Mandatory waiting periods to buy guns – leaving those who likely need a gun the most, defenseless.

Universal background checks – resulting in the government having a complete list of guns and their owners.

Mental health expansion laws – designed to seize guns from gun owners on the mere word of one “mental health staffer.”

If you watched the Late Show the other night you watched missed seeing one of the top tier Presidential candidates describe their utopian gun control agenda – one that the candidate hopes will sweep the nation state by state.

You missed it because it didn’t air – after being taped – likely because the campaign staffers who heard about it decided to pull it down for fear that it would hurt the candidate.

But this wasn’t a tactical decision by Hillary Clinton’s folks. It wasn’t that loud-mouthed gun grabber Chris Christie who said this. And it wasn’t even something that was said by the radical Bernie Sanders.

Jeb Bush, when appearing on the debut episode of the new Late Show, came out in support of radical gun control just a few days ago!

These legislative ideas are the kind of things that resulted in many legislators right here in Iowa being drummed out of office once Iowa Gun Owners exposed these positions to the voters in their districts!

And now they are coming from none other than Jeb Bush!

Don’t take my word for it. Listen to what he says for yourself by clicking on the video below. 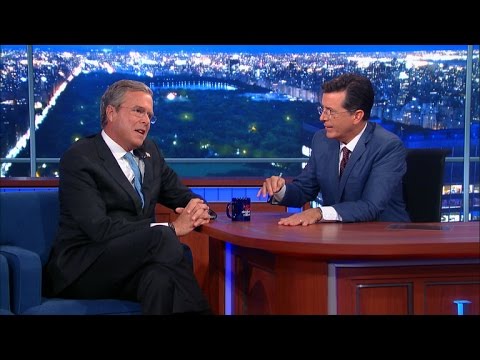 Of course, Bush couches his words in his professed support for the 10th Amendment, which simply means that he would prefer each individual state enact the kinds of gun control that his home state of Florida has in place.

Worse, it’s obvious from the way he laid this out, that this is exactly what he would like to happen! He didn’t stumble, he wasn’t trapped by a smart host, and he didn’t misspeak a word here or there.

This is what Jeb Bush thinks about your gun rights!

Imagine being a homeowner in Ferguson, Mo., last year – watching your city burn – and being unable to buy a handgun to defend your family with because of a government mandated 72 hour waiting period.

Imagine being a homeowner in Boston, stunned as police chased a terrorism suspect around your city for 4 days, and you being left defenseless because some politician decided that you needed to wait 3 days to pick up your firearm.

In all of these scenarios, understand that the criminals are not going to wait around for 3 days to but a weapon to carry out their plans to assault you or those you love.

You may be thinking, “So what, I’ve already got all the guns I need.”

You and me both.

Of course, Bush’s plan to change the mental health laws is designed to make it appear so reasonable that no one would oppose it.

You see, currently, for someone who’s deranged to lose their constitutional right to keep and bear arms, they have to be “adjudicated” defective.

Adjudicated means that a judge or jury of your peers needs to be convinced to end those rights.

All of your due process rights are able to be used in this process. You can have an attorney present, produce evidence, confront evidence and witnesses being used against you, etc.

If the government is able to substitute “adjudication” for “declaration” then anyone authorized by the government can, unilaterally, declare you unfit to own firearms!

You can see now why this is so dangerous. This doesn’t affect the size of the magazine in your Colt .45 or whether or not you can own an AR-15. This just flat out leaves you prohibited from owning ANY firearms.

You’d have more rights contesting a traffic ticket than you would the seizure of your constitutionally protected right to keep and bear arms if Jeb Bush’s mental health plan became law at the state or federal level!

Iowa Gun Owners, with your support, has already fought and successfully defeated the passage of a bill that would do exactly this right here in the Iowa legislature!

SF233 was introduced in the Senate by Daryl Beall in 2014 and would do exactly what we’ve described above!

Not only were gun owners mobilized enough to prevent this bill from becoming law here in Iowa – gun owners in Senate District 5 booted Beall out of office once we informed them of what Beall had been up to in Des Moines!

And now Jeb Bush wants to see this same type of law enacted state by state all over the country!

Don’t be lulled off guard by his talk of the 10th Amendment. That simply means that he’d happily see the state government crackdown on your gun rights as opposed to the federal government.

More and more this is exactly what the gun grabbers are doing in response to the stinging defeat they were handed by gun owners in 2013 at the federal level: taking their fight to state legislatures all over the country.

We’ve been able to stop them so far here in Iowa.

Now we need to ensure that Iowans know all about Jeb Bush’s state-based gun control scheme and that Bush knows that Iowans won’t put up with it. Please help us get the word out by:

2.   Contacting Jeb’s national apparatus by leaving him      the message on his facebook page.

3.   Forwarding this email to every gun owner you know in      the state – make sure they have the facts about      where Jeb stands.

Everyone knows that Hillary Clinton was a driving force behind the UN Small Arms Treaty, that her husband pushed an “assault weapon” ban through Congress, and that she’s hysterically opposed to your right to keep and bear arms.

You and I now know the truth about Bush. Make sure your friends do too.

P.S. In an unbelievable move a few days ago, presidential candidate Jeb Bush came out in favor of mandatory waiting periods to buy a gun, universal background checks, and dangerous expansions of mental health laws!

All of these do nothing to stop criminals from using firearms to carry out their illicit activities – but instead make it easier for the government to track and seize guns from gun owners!

Don’t take my word for it – watch the video for yourself.

Now you’ll understand why this video wasn’t aired after being taped!

Please take action by contacting Bush’s Iowa director at (267)992-6201 and the national campaign on their Facebook page.

Tell them that you’re an Iowan, you’ll be voting in the caucuses, and Bush’s comments on the 2nd Amendment tell you all you need to know about where he stands on your gun rights!

If you can, please consider a donation to Iowa Gun Owners as well for $50, $25, or even just $10 to help us get the word out about Jeb and any other candidate whose record on the 2nd Amendment is being kept under wraps from Iowans.