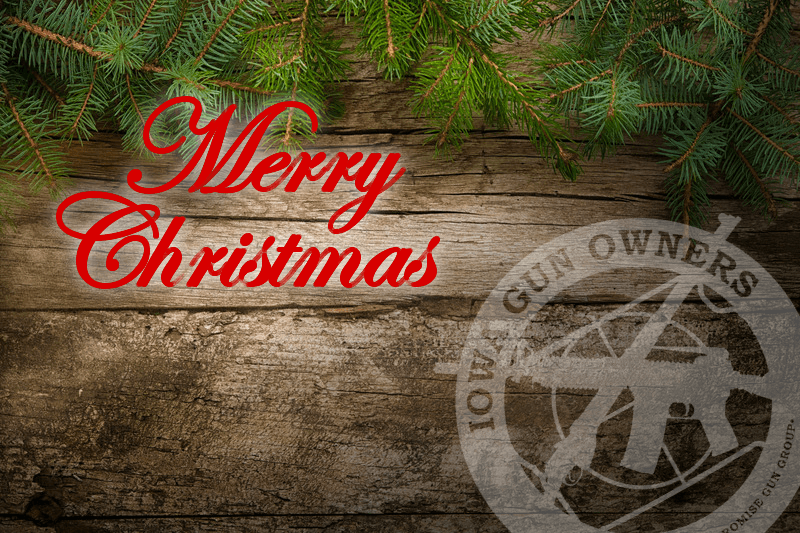 On behalf of the Board of Directors, I would like to wish you and your family a very Merry Christmas from all of us here at Iowa Gun Owners!

While we again saw Constitutional Carry and Stand-Your-Ground law bottled up and stopped in the Iowa Senate, the members of Iowa Gun Owners made their voices heard in a major way on Nov. 8.

Mike Gronstal — the 34-year incumbent legislator who has run the Iowa Senate as the Majority leader for years — was finally toppled and booted out of office by angry gun owners!

His right hand, Steve Sodders, the Senate President Pro-Tem and the Chairman of the Senate Judiciary Committee, the committee where both of our gun bills were sent to die, was also soundly defeated by gun owners.

Simply put, the members of Iowa Gun Owners had had enough and decided to voice their displeasure in a major way on election night, reshaping Iowa politics for a long time to come.

As a result, we have a pro-gun legislature and a pro-gun Governor for the first time in decades, setting the stage for what we intend to be a very busy and productive 2017 legislative session!

And let me tell you, the rank and file members and supporters of Iowa Gun Owners have sent shock waves through the Des Moines political establishment.

Every TV and radio ad we ran, every piece of direct mail we deployed, every sponsored video we ran on Facebook, all of the ground game — all of this was funded by you.

Gun owners sent a loud message on election night: if you mess with our gun rights, with our right to defend ourselves and our loved ones, you will pay a price.

That’s the reason why we’re closer than ever before to passing Constitutional Carry and Stand-Your-Ground law here in Iowa!

And for that, I wish you a very Merry Christmas and hope that you have a wonderful weekend with your family and friends.

In just 16 days the 2017 legislative session kicks off.

And it would be a mistake to assume that you and I can sit back and trust in the legislature to pass these important pieces of legislation on their own.

2017 promises to be a wild ride as we fight to pass major legislation. But we’d never have had the chance had it not been for all of your support of the Second Amendment in 2016.

And for that, again, I thank you and wish you a very Merry Christmas!

P.S. Merry Christmas from all of us here at Iowa Gun Owners!

As we reflect on the success of 2016 in crushing anti-gunners at the polls and entirely replacing the leadership of the Iowa Senate — I know that this was only possible because of you.

Now, as we prepare to kick off the 2017 legislative session in just sixteen days, I hope you’ll stand with us again as we work to bring Constitutional Carry and Stand-Your-Ground law to Iowa!

And if you haven’t, please make sure you’ve renewed your membership in Iowa Gun Owners right away!

forward this email to your friends.