Please read this email to the very end for details you don’t want to miss.

If you’ve been a member or followed Iowa Gun Owners for any length of time, you know we NEVER apologize for fighting for your freedoms and we NEVER compromise with anti-gun politicians.

Because of this rock-solid belief, IGO members have led the charge to successfully pass Stand-Your-Ground law in 2017 and have stopped every attempt to advance ‘Red Flag Gun Seizures!’

That includes the ‘Red Flag Gun Seizure’ bills that Republicans — like House Majority Leader Matt Windshitl -– openly admitted they were working to advance in previous years.

While politicians like Windshitl were hoping that Iowa Gun Owners would sign off on their gun control bills, like the NRA has done so many times in the past, we said HELL NO!

When politicians like Mike Gronstal, Steve Sodders, and over two dozen other gun grabbers attacked our gun rights, we EXPOSED them and IGO members boot stomped them right out of office!

And it’s because of this — our willingness to confront Republicans and Democrats alike — that Iowa Gun Owners has become the most hated gun rights organization that Iowa has ever seen, terrifying anti-gun activists and politicians alike!

That’s why Michael Bloomberg’s top stooge and founder of Everytown For Gun Safety, Shannon Watts, has been viciously attacking Iowa Gun Owners, along with my brothers and me, for being “more radical than the NRA” and for advancing the “No Compromise” message! 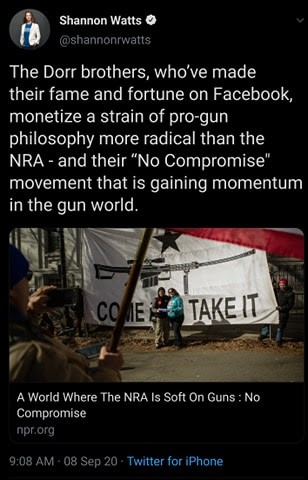 It’s a title we wear proudly and would never apologize for — we only wish we could help more gun owners!

In Wyoming, despite of the screams of protest from Bloomberg’s hoards and then-Governor Matt Mead, the Dorr Brothers fought tooth and nail for Wyoming Gun Owners and PASSED Stand-Your-Ground law in Wyoming in 2018.

In Minnesota, when Shannon Watts and Everytown For Gun Safety were howling on the steps of the capitol in St. Paul, my other brother, Ben Dorr, lead Minnesota Gun Rights members in CRUSHING their dreams of passing gun control bills in 2019.

In Missouri, despite a massive radio/TV/newspaper attack from Michael Bloomberg’s forces, I proudly led the fight for the Missouri Firearms Coalition as we successfully PASSED Stand-Your-Ground AND Constitutional Carry in Missouri in 2016.

In Wisconsin, the Dorr Brothers passed Constitutional Carry through the committee process, before the bill was shot down by then-Governor Scott Walker, who was scared off by Michael Bloomberg’s pressure.

And in New York State, the belly of the beast, it’s been the Dorr Brothers who have been battling back against Governor Cuomo by sponsoring Stand-Your-Ground law and gathering dozens of cosponsors on this badly needed legislation!

THAT is why Shannon Watts attacks the Dorr Brothers. THAT is why Michael Bloomberg’s head stooge calls us “more radical than the NRA” and accuses us of advancing a “No Compromise” message all across our great land… because we are.

‘Compromise’ in gun rights only works one way — and it’s AGAINST US!

Do you think if gun owners signed off on Shannon Watts’ ‘Red Flag Gun Confiscations’ bill, that the gun control crowd would sign off on Constitutional Carry law here in Iowa? Absolutely NOT!

So while some organizations do deals with anti-gun politicians, Iowa Gun Owners refuses to give an inch, and that is why the Fake News Media and Bloomberg’s gun control organizations hate us so badly and want to bring us down.

But we know what you know: that the future of our nation is on the line.

Our American heritage of freedom is under attack from a socialist/communist revolution that is taking place right in our streets as Antifa and BLM thugs attack our law enforcement and burn our cities to the ground.

That is why we FIGHT so damn hard…to save our country…to save the West.

Please stand with us and cram this Leftist agenda right down the throats of the DNC-controlled media and Bloomberg’s gun control lobby by JOINING Iowa Gun Owners today!

We need every Iowa Patriot in our ranks to continue stopping the left’s attacks on our gun rights and our Iowa way of life.

If you’re already a member, please consider making a generous contribution to help fund our programs.

It’s because we’re EFFECTIVE and we WIN!

Stand proudly for your freedoms and JOIN or DONATE today!

P.S. Michael Bloomberg’s chief stooge and founder of Everytown for Gun Safety, Shannon Watts, is viciously attacking Iowa Gun Owners and the Dorr Brothers for refusing to compromise or go soft on your gun rights.

To them we say ‘Take your leftists ideology and shove it down your throats! We’ll never quit!’

We will NEVER stop fighting for your freedoms and for the freedoms of our future generations!

Stand with us! Join us by clicking this link or, if you’re already a member, make a contribution today to help us expose gun grabbers this fall by clicking here!