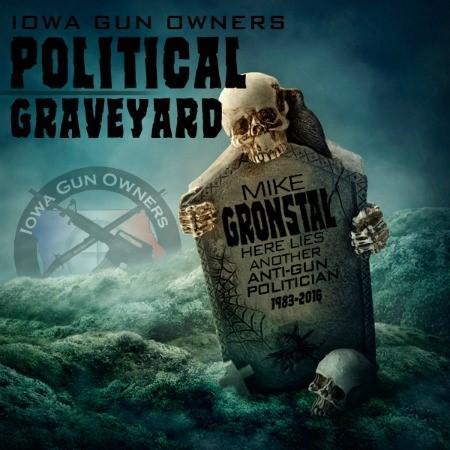 Mike Gronstal has been in office and voting against your Second Amendment rights off and on for thirty two years!

Well, seeing him vote NO on Constitutional Carry, block Stand-Your-Ground law, and work to undermine our gun rights for decades, gun owners in Council Bluffs had enough and booted Gronstal from office tonight in perhaps the biggest upset of the evening!

Sure we worked our tails off to inform gun owners in Senate District 8 about Gronstal’s record and about Dan Dawson’s 100% pro-gun reply to our 2016 Gun Rights Candidate Questionnaire.

We hammered him with radio ads.

We rolled out tons of TV spots.

Two weekends ago, a team of IGO volunteers dropped flyers on over 6,000 doors.

We mailed over 12,000 households a full direct mail package stuffed with the details of Gronstal’s abuse of the Second Amendment.

But to see an incumbent get booted out of office when he’s been in since I was four years old is just incredible!

This is what happens when gun owners stick together, when we don’t take compromises, and when we fight hard!

Gun grabbers in the Senate will be reeling from this loss for years.

No one will forget the time that the members of Iowa Gun Owners removed an incumbent who’d steadily been attacking the Second Amendment for over three decades!

This is your victory!

Every single penny of our election program in this district was funded by you.

P.S. He’s been there for over thirty years, warring against your gun rights.

But tonight, Mike Gronstal’s 32 years of attacks on the Second Amendment came to an end as gun owners bounced him from office once and for all!

It’s the political shot heard ‘round the state tonight in Iowa.

And it’s all been made possible by you!

While other organizations in Iowa try to cozy up to Gronstal, you gave us the ammo we needed to go after him with a nasty program of TV and radio ads, mountains of direct mail, slicks, tons of Facebook videos, and more!

Thank you, so much, for giving us the tools to fight for you!