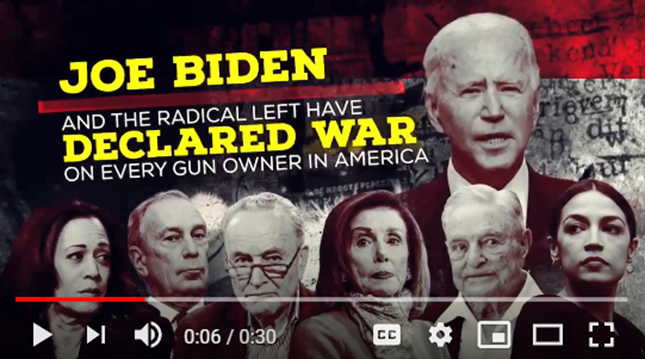 Our Congressional sources tell us that Nancy Pelosi may be preparing to advance H.R. 8 — the national gun owners registration bill that we’ve been warning you about — as early as next week!

This bill will make the private party transfers of firearms illegal in almost every situation, and through it’s ‘Universal Background Checks’ provisions, give the left what they’ve always wanted: a list of every single gun owner in America!

There is only ONE reason why Joe Biden, Nancy Pelosi, and Chuck Schumer want that list, and we all know what that is.

But there is no guarantee that the socialists in Congress have the votes they need to pass these attacks on our gun rights.

In fact, with Pelosi having the smallest Democratic majority in 100 years and Chuck Schumer sitting on a mere 50-50 ‘majority,’ gun owners can shut this bill down, if our Republican ‘allies’ stand up and hold the line in Congress.

That’s why Iowa Gun Owners has just commissioned this digital ad, to make sure gun owners across Iowa know what’s at stake, and to urge them to take action!

Now that you’ve seen this ad, I hope that you will do two things right away, to help us stop Biden’s war on gun owners.

First, call your Congressman (especially the Republicans) and U.S. Senators and make sure they know that you are 100% opposed to Joe Biden’s gun control and that you expect them to vote no!

Second, do everything you can to help us get this ad up on digital platforms, radio stations, and even TV networks across the state so that every gun owner in Iowa can take action.

The fact is that numerous Republican Congressmen have already added their names to this bill as a cosponsor! Clearly party labels just don’t count for much anymore, which is why we can’t take anything for granted.
So please make an immediate donation to help Iowa Gun Owners get this ad in front of as many gun owners as possible!

The votes on this legislation as well as the other bill that we expect to see filed at any moment, that outlaws the possession of AR-15’s and hundreds of similar firearms could happen at any moment, so please be generous and act quickly!

P.S. With votes coming soon on key pieces of Joe Biden’s war against gun owners, Iowa Gun Owners has released our first digital ad as we work to flood Congress with calls against a national gun registry and a ban on semi-automatic rifles!

Now that’s you’ve seen it, please make an immediate donation to help Iowa Gun Owners get this up on digital platforms, radio stations, and even TV stations — so that every gun owner in the state can see it and take action!