As more Americans are realizing, the hard left is doing everything they can to advance their America-hating socialist agenda during the Coronavirus.

California Governor Gavin Newsom, for example, brazenly stated his goal of using the Coronavirus to usher in new progress policies, saying that this is a time to “reshape…how we govern.”

The heart of that agenda is radical gun control, which is why Iowa Gun Owners has been leading the effort to mobilize gun owners against H.R. 5717, the gun control ‘mega bill’ in Congress.

That’s why we recently sounded the alarm on the fact that Congressional Democrats are trying to force Senate Republicans to put portions of this bill into the next round of stimulus spending.

We’ll have more on that legislation in the near future.

But over the last three weeks, hundreds of IGO members have reached out to us, concerned about the Constitution- shredding precedent that is being set in Iowa and across the country.

The concern is very simple: if a governor can simply seize power due to a medical emergency, ignore the legislature, and close private businesses at whim, where does this end?

And while here in Iowa the Governor can’t unilaterally close gun stores, governors in dozens of states have used their new-found powers to do exactly that.

Clearly, the situation we are in has direct Second Amendment implications.

But more than that, the excessive quarantining that Iowans are suffering under has everyday life consequences, too.

Above it all, though, is a growing sense of real frustration.

Frustration that this virus, which has killed far less people than the flu has this year, is being used to utterly implode Iowa’s economy.

People have been asking us, repeatedly, for a way to make their voices heard in Terrace Hill as well as in our legislature in the same way we give gun owners a voice when it comes to their Second Amendment freedoms.

And that’s why, in addition to my duties for Iowa Gun Owners, I have been building online advocacy tools for Iowans who want to end the excessive quarantine that we find ourselves in.

Well, as you may have seen on the front page of the Des Moines Register this past week, the radical left doesn’t like it when Iowans stand together for freedom. 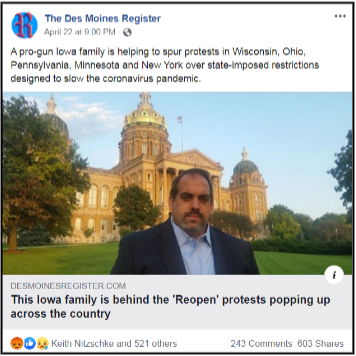 (The Des Moines Register launched a wave of attacks against Iowa Gun Owners and me personally, because of my work helping to end excessive quarantining.)

Once the fake news media found out that I, along with my brothers Chris and Ben, were involved in helping Americans in states like Iowa, Wisconsin, Minnesota, Ohio, and New York advocate for a return to common sense, they attacked!

The Washington Post, CNN, USA TODAY, and dozens of smaller media outlets like the Des Moines Register have done all they can to smear “The Dorr Brothers.”

From the harassing phone calls my wife has received, to the repeated death threats that I have received by text and emails, it’s clear that the radical left wants to destroy their opposition, by any means necessary! 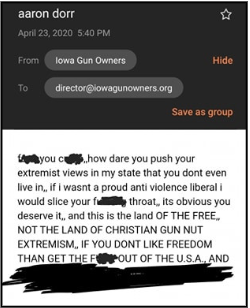 (A sample of the death threats that I have been receiving over the past week, after the fake news attacked my family.)

While I am used to taking slings and arrows for the members of Iowa Gun Owners, it’s always amazing to me that the party of tolerance is willing to kill their opposition the
moment they disagree with them!

The truth is, while my brothers and I are the ones being attacked right now, the radical left and their pals in the ‘Fake News’ media hate every proud American who loves this country and is willing to fight for it.

While radical socialists and their friends in the media are never going to be able to silence ‘The Dorr Brothers’ as we fight for the Second Amendment — they have been able to attack us in other ways.

As you may have noticed, Iowa Gun Owners recently lost our ability to receive your online donations after being ‘deplatformed’ by the company that we have used for years.

This is a standard practice for leftists these days.

They find a service provider that helps organizations like Iowa Gun Owners fight for gun rights — publish that company’s contact info — and hope that gun control activists harass them so much that the company drops us as a client.

And that’s exactly what happened.

So in the midst of a massive program to mobilize gun owners against H.R.5717 (the gun control mega bill in D.C.) — as well as our efforts to expose Cindy Axne and Abby Finkenauer’s votes for radical gun control — our donation platform was taken from us!

With so much going on, this is no time for Iowa Gun Owners to be in a weakened position. If we don’t have the ammo we need to fight with, we can’t fight.

And that’s why I want to ask you to make an emergency donation to Iowa Gun Owners, to ensure that we are still able to fight!

The good news is that while dealing with this media-driven storm, we have worked to quickly bring our online fundraising abilities back online.

And to be honest, our new donation system looks better, it works better, and it’s even more affordable than the system we were using.

But being shut down like that, even for just a few weeks, will certainly hamper our efforts to expose gun grabbers during the upcoming 2020 election cycle.

I’m proud to fight for the Second Amendment freedoms of Iowans, and I’ll never give up, no matter what hostile media elites try to do to me.

Thank you, in advance, for your support!

P.S. ‘Fake News’ outlets like the Washington Post, CNN, USA Today and others launched a national attack against me and my two brothers, for giving our members a platform against the excessive quarantining that is taking place in America.

The last week has been filled with death threats, obscene text messages sent to our spouses, and much more.

As you’ll read above, we also lost all online fundraising ability, costing us precious dollars — dollars that we desperately need to expose gun grabbers in 2020!

That’s why I hope that you’ll make an emergency donation today for $100, $50, $25 or even just $10, to show your support for Iowa Gun Owners and to make sure we can keep fighting for you!

No Gun Control in Stimulus, This Time!