I need you to take a minute to read this email and take immediate action!

Today, in Washington, the Senate Judiciary Committee will begin to hold hearings on whether or not to confirm Loretta Lynch as our next Attorney General.

Lynch has no voting background that can be examined, nor has she made any discoverable statements on the 2nd Amendment to give gun owners an insight into her stance on the meaning of the 2nd Amendment and how she would interpret that as Attorney General.

In many ways, we’re flying blind.

Of course, that wasn’t the case with Eric Holder’s nomination as his utter contempt for gun owners was well documented at that time.

Holder, even then, was on the record in support of a three-day waiting period for handgun purchases, one-gun-a-month purchasing limits, licensing and registering of all gun owners, mandatory smart gun technology, and regulating gun shows.

Unfortunately, both of Iowa’s Senators voted to confirm Holder at that time, even though his hostility was well known.

As gun owners in Iowa know, Eric Holder’s time as the Attorney General only strengthened his unconstitutional actions towards our gun rights, including:

***  Using his position to enforce Barack Obama’s      unconstitutional executive actions and to crack down      on law-abiding gun buyers, sellers, and owners;

***  Using his position to push for more gun control,        including banning semi-automatic firearms,      standard-capacity magazines, and private firearm      sales through an expanded government background      check and gun registration system, and;

Because of his unprofessional conduct surrounding the Fast and Furious gun running scandal, Eric Holder was even held in contempt of Congress!

That’s why it’s so important that the Senate does a thorough job of vetting and looking into the background of Loretta Lynch.

All we know about her currently is that she’s come out of the US Attorney’s Office in New York City – something that should give every gun owner pause.

Already national gun rights organizations like Gun Owners of America and the National Association for Gun Rights have been urging the Senate Judiciary Committee to reject Lynch’s nomination unless she provides clear answers on where she stands on issues like:

1. The BATFE’s unconstitutional practice of photo copying 4473 forms – forms that gun owners fill out when buying a new firearm. Would she continue to approve this unconstitutional ploy, knowing that this only serves to build up a national gun registry for the Obama administration?

2. The now infamous Fast and Furious scandal. Specifically, what reforms will she put in place to ensure that this never happens again?

3. President Obama’s long-standing legislative goal of not allowing the private sale of firearms; would she support universal background checks, which will create a defacto national gun registry?

4. The banning of imported firearms; would she follow Holder’s long standing tradition of allowing the Justice Department to arbitrarily ban the import of legal firearms?

Of course, as Iowans, we have a special role to play in this process as our own Chuck Grassley is now the Chairman of the Judiciary Committee and he will be personally overseeing the vetting of Loretta Lynch.

When we reached out to Senator Grassley’s office on Monday, his staff said that the Senator had not yet made up his mind on whether or not to support Loretta Lynch. 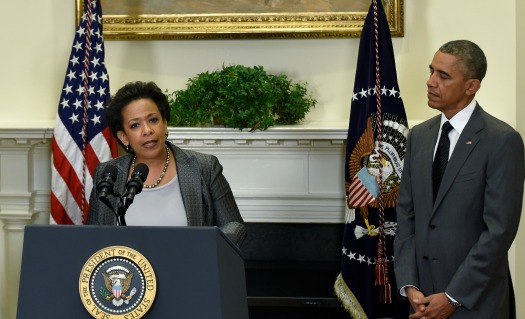 (Loretta Lynch, at left, addresses the media while Pres. Obama looks on. Will Lynch support Obama’s unconstitutional anti-gun actions and will she maintain Eric Holder’s relentless attacks on the 2nd Amendment?)

Similarly, Senator Joni Ernst’s office said that she had not yet decided whether or not to support Loretta Lynch as Attorney General.

That’s why I need you to take a moment to contact Senator Grassley and Senator Ernst and make sure that they get thorough answers to the questions we listed off above.

Some Republicans like Tennessee’s Lamar Alexander and Alabama’s Jeff Sessions have a history of rubber-stamping the President’s nominees.

Many of these same beltway insiders claim that “slowing down the President’s nominees is just obstructionism,” and that Lynch is “just a place holder.”

I hope you don’t fall for these excuses. The fact is, vetting the President’s nominees is the constitutional duty of Senators – especially for our Senator Grassley who chairs the Judiciary Committee.

Insist that he get answers to the questions above using his position as the Chairman of the Senate Judiciary Committee! We can’t afford any more rubber stamping votes – Eric Holder’s nomination was harmful enough.

Make sure she knows exactly where Loretta Lynch stands on your gun rights before voting for another of Obama’s radical gun control activists.

Thank you, in advance, for your activism in defense of the 2nd Amendment!

P.S. Eric Holder’s 6-year anti-gun reign of terror is about to come to an end – ending an aggressive and hostile attack on our gun rights, that was run right out of the Attorney General’s office and funded by your tax dollars.

Will she support Obama’s plan to set up a national gun registry via universal background checks, will she make sure we never have another Fast and Furious scandal, and will she use her office to continue banning imported antique firearms?

Make sure that Judiciary Chairman Charles Grassley uses his position to find out. Also, be sure that Senator Joni Ernst knows that you want answers to these questions before she votes in favor of Lynch.