Stand Up For Stand-Your-Ground Legislation in Iowa!

Stand Up For Stand-Your-Ground Legislation in Iowa! 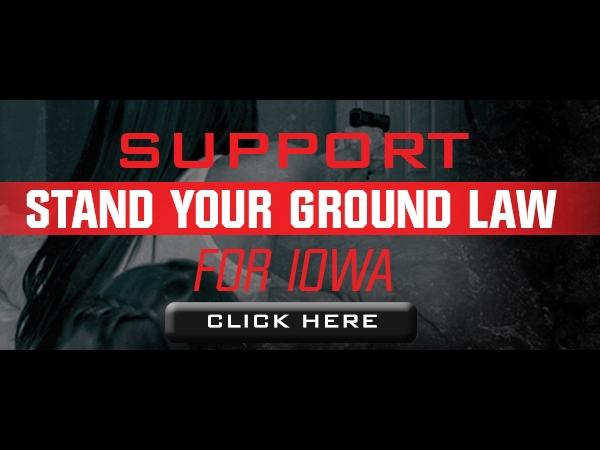 You hear a window shatter late one night.

It’s the unmistakable sound of an intruder bursting in your home, seeking new goodies to steal — or new innocent victims to rape and murder.

The good news is, you’re armed, you’re trained, and you’re ready to do whatever it takes to protect both yourself and your family . . .

But the bad news is, under existing Iowa Law — regardless of just how bloodthirsty that thug in your home is — you’d better be ready to go to JAIL if you dare “solve the problem!”

If you want to make sure this situation never happens to another law-abiding Iowa gun owner, it’s absolutely vital you sign and submit your petition IMMEDIATELY.

As you’ll see, these petitions urge your State Representative and State Senator to cosponsor and vote to pass the Iowa Stand-Your-Ground Bill.

If passed, the Iowa Stand-Your-Ground Bill would simply state that law-abiding Iowa gun owners can defend themselves against intruders without fear of being targeted by an anti-gun prosecutor.

The truth is, these types of situations happen FAR too often across Iowa.

Just take the case of Jay Rodney Lewis in 2012.

After using a gun to defend himself from attack by two thugs — one with over 40 criminal convictions going back 15 years — Mr. Lewis spent 112 days in jail before finally being found innocent.

But in the meantime, Mr. Lewis lost his home and most of his possessions — including his gun collection.

I’m sure the gun-grabbers think to themselves, “that serves him right!”

After all, whenever some thug commits some horrific crime, don’t the gun-grabbers always rush to place blame — not on the criminals themselves — but on law-abiding gun owners?

So is it really any surprise they’ve written Iowa law to protect criminals first — even when it’s you and your family’s safety at stake?

I don’t know about you, but I believe the law should put the interests of law-abiding Iowa citizens ahead of thugs and madmen.

And as a former cop, I can tell you the LAST thing you want to be worrying about in a situation where there are lives on the line is the “good will” of some anti-gun prosecutor or judge.

The good news is, after the results of the 2014 elections, I believe you and I can take a giant step forward towards passing Stand-Your-Ground here in Iowa.

But it won’t happen without your support.
Just forcing a vote on Stand-Your-Ground legislation puts you and me in a win/win situation.

That’s because there’s no vote the gun-grabbers in BOTH parties fear more.

Many state legislators love to campaign as “pro-Second Amendment.” But once elected, they work behind the scenes to stab law-abiding gun owners in the back.

As a result, Iowa is one of the worst states in the nation when it comes to gun control laws.

In fact, according to Guns and Ammo Magazine, only 12 states have worse laws!

Lack of a Stand-Your-Ground Law is a big reason why Iowa isn’t ranked higher.

But the good news is, if you and I force public, roll-call votes in both houses of the General Assembly, ALL the gun-grabbers in BOTH parties will finally be exposed.

Either you and I will get the votes we need to pass Stand-Your-Ground, or gun-grabbers will pay the price in the next election.

Second Amendment supporters will make sure of it — just like in 2014.

But this effort cannot wait a moment longer. So please, sign your Stand-Your-Ground petition TODAY!

Turning up enough heat on the Iowa General Assembly to FORCE them to act is going to take time.

So in addition to your signed petitions, won’t you please agree to send your most generous contribution right away?

Your immediate support will help Iowa Gun Owners turn up the heat on the General Assembly with a massive grassroots program, including:

>>> Generating 50,000 petitions from all over Iowa insisting the General Assembly pass Stand-Your-Ground;

>>> Using email, social media and Internet ads to mobilize an additional 20,000 Iowans from all over the state;

>>> Working the blogs and granting media interviews to explain from a former cop’s perspective exactly why Stand-Your-Ground would make Iowa freer and safer;

>>> Paying for hard-hitting radio, newspaper and even TV ads to ensure politicians are feeling the most heat right before they’re forced to vote.

This won’t be cheap.

But thanks to the support of good folks like you, Iowa Gun Owners’ members and supporters have proven we can make an incredible impact.

Not only that, but after our last all-out push for concealed carry reform, our state government passed one of the best shall-issue laws in the country — even though anti-gun legislators controlled BOTH houses of the General Assembly!

And in 2010 and 2014, after massive election year programs by Iowa Gun Owners, we proved Second Amendment supporters are a political force that cannot be ignored.

So won’t you please sign your Stand-Your-Ground petitions and submit them IMMEDIATELY?

Every dollar will help me push forward for Stand-Your-Ground in Iowa.

P.S. Guns and Ammo Magazine reports that there are only 12 states in the U.S. with worse gun laws than Iowa. A big reason is our lack of a Stand-Your-Ground Law.

If passed, Stand-Your-Ground would simply state that law-abiding Iowa Gun Owners can defend themselves against criminal attack without fear of being targeted by some anti-gun prosecutor.