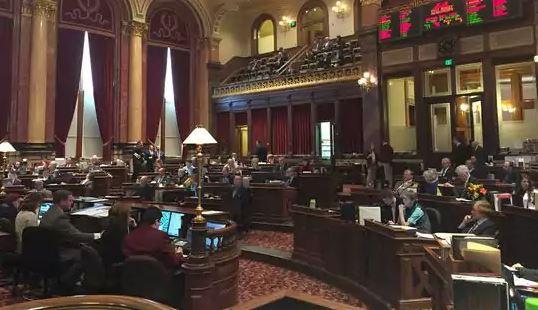 Since the day that Steve Sodders and Mike Gronstal were bounced out of the Iowa Senate, we’ve been focused on two issues: Stand-Your-Ground law and Constitutional Carry.

Stopped just two votes short of passage in the anti-gun State Senate for the past two years, Stand-Your-Ground law died on the vine despite a massive grassroots push.

That’s why I’m pleased to announce that Stand-Your-Ground law is redrafted and is now ready for cosponsors!

It’s time to crank up the calls and emails into the Capitol!

As you’ll remember, Stand-Your-Ground law is a straightforward concept: if you’re legally allowed to defend yourself from a violent criminal in public, you may do so without having to retreat first.

Can you imagine anything more stupid than having to walk backwards in the face of an armed criminal, bent on rape or murder?

Any peace officer in Iowa will tell you that that’s the worst thing you can do!

You’re likely to fall over your own two feet and you’re telegraphing to the thug that you’re easy prey!

Can you imagine being arrested because you didn’t retreat prior to defending your family?

That’s what happened to Jay Rodney Lewis, the law abiding gun owner who was headed home from work in West Des Moines a few years ago.

Mr. Lewis was rammed off the road by a lifetime criminal and threatened with a beating. Driving 200 yards away from the accident, he called 911 and asked for help.

But the intoxicated felons advanced on him again — before police arrived — and when they came too close, Mr. Lewis fired in self-defense.

Despite the fact that Mr. Lewis shouted “GET BACK” or “GET DOWN” almost a dozen times (a fact captured on 911 audio) the police arrested him!

That’s because the prosecutor in Polk Co, John Sarcone, is well known for opposing a citizen’s right to self-defense.

In fact, he testifies against these bills regularly in the Capitol!

No Iowan should be forced to go through the hell of being arrested, posting a massive bail, trying to clear their name in criminal court, doing the same thing in civil court — all because some thug tried to murder him or his family!

That’s why we need Stand-Your-Ground law now. This legislation, once passed, would:

>>>  Remove the obligation to retreat before taking  defensive action in the face of a violent criminal  attack;

>>>  Specify that a law abiding Iowan would not be  arrested as a default action, unless probable cause  exists to believe that they broke the law;

>>>  Prevent frivolous civil lawsuits from being filed by  the thug (or their estate) as long as your actions  were deemed lawful by the criminal process.

>>>  Allows for third party defense situation, allowing  you to defend another person as though they were  your family.

Despite the hysterics that will be coming shortly from the Des Moines Register and other liberal media here in the state, you’ll note the bill doesn’t relax the standards on when you can fire a weapon in self-defense.

All of the justifiable use-of-force laws in the books remain in place.

This simply removes the duty to retreat, before you’re allowed to defend your family in accordance with our laws on justifiable use of force.

But now we need your help!

This bill has been drafted by long time pro-gun hero Rick Bertrand in the Senate. The bill is laying on his desk, where it’s awaiting cosponsors.

I need you to immediately call, email, and Facebook your Senators and urge them to cosponsor this legislation right away.

This bill won’t have a bill number assigned until it’s “read in.” But trust me, EVERYONE knows what Stand-Your-Ground law is and how simple it is to cosponsor it.

Your message is simple, gun owners have waited for years to have the Stand-Your-Ground law protections that most states already provide.

With a pro-gun majority, now is the time for them to make this a reality in Iowa.

The bill is on Senator Bertrand’s desk. Urge them to physically add their name to the bill right away!

The time for talk is over.

No more half measures.

It’s time to act, by passing this legislation, and that starts with their co-sponsorship.

P.S. You’ve been waiting for this for a long time! But Stand-Your-Ground law is drafted and awaiting your Senator’s co-sponsorship!

If you’re outraged at the thought of having to retreat from and armed attacker bent on rape or murder before you can defend yourself — we need your help now!

Call your Senator at (515)281-3371 (they’ll connect you automatically) and insist that he cosponsor the Stand-Your-Ground bill on Senator Rick Bertrand’s desk!

You can also reach them via email. Go here to find their email addresses.

We need your help, now is the time!