Standing Your Ground in Iowa!

Standing Your Ground in Iowa! 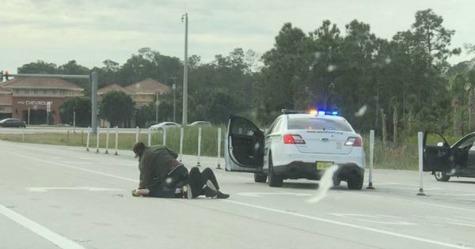 As Lee County Deputy Dean Bardes lay flat on his back on the side of I-75 being pummeled to the point of near unconsciousness by Edward Strother, he begged an armed citizen who stopped to offer help to shoot the suspect.

Seconds later, the vicious attack on Deputy Bardes was ended as Ashad Russell opened fire with his concealed pistol — striking Strother three times in the chest.

Last week, the State’s Attorney’s office announced that Russell would face no charges for shooting and killing Strother.

Chalk up another victory for Stand-Your-Ground law in Florida.

And a stark reminder of why we need to see Stand-Your-Ground become law here in Iowa!

In a few minutes, I’ll have a petition for you to sign, calling on your legislators to back Stand-Your-Ground law in Iowa. More on that below.

Unless you simply haven’t seen the news here in Iowa over the last couple of days, the fight to advance Stand-Your-Ground law is getting white hot in Des Moines.

Of course, this also means that opposition to this bill is reaching a fevered pitch, as well.

Predictably, media outlets and anti-gun organizations are saying that Stand-Your-Ground law is about gun owners having a free hand to shoot minorities.

In fact, nothing could be further from the truth.

In the Florida case mentioned above, the suspect was black, while the officer was white, and the hero who saved him was also black. 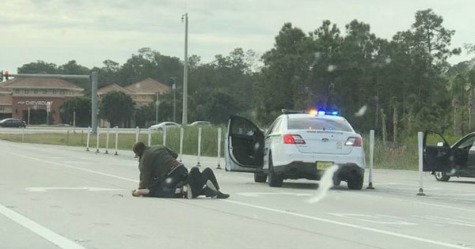 (Lee County Deputy Dean Bardes laying on I-75 being assaulted by a violent criminal. Only three shots from a citizen’s gun saved Deputy Bardes’s life.)

In the infamous Jay Rodney Lewis case here in Iowa (who was wrongly prosecuted but ultimately found innocent of all charges,) it was Mr. Lewis who was the minority.

The suspects that Mr. Lewis was defending himself against were white. White, drunk, and possessing dozens of criminal convictions — some of them felonies — over the last couple of years.

Experts and studies agree that Stand-Your-Ground law benefits all law-abiding citizens, and minorities most of all!

But we all know this already.

And so does the liberal editorial board at the Des Moines Register and other media outlets across the state who’ve come out swinging against Stand-Your-Ground law last weekend.

They are simply bitter that gun owners spoke up loudly last fall and threw out the legislators who were the main opposition to these bills.

But that doesn’t mean that they can’t scare some of the moderates here in Des Moines into supporting lesser versions of Stand-Your-Ground law.

That’s why I need you to sign your petition in support of this crucial legislation right away.

You see, while SF 262 has the all-important immunity language for both criminal and civil courts — the latest version from the House does not.

This means that while the House bill would remove the duty to retreat, you may still be arrested at the scene.

You’d still be required to appear in court and make a defense of your actions under this code section.

In other words, you’re still having to post a huge bond and pay large attorney fees to prove your innocence.

While you’d almost certainly prevail in criminal court with the duty to retreat being removed, it would come at a very high price.

We need a strong Stand-Your-Ground law, not something that makes politicians feel good but still leaves every day Iowans vulnerable.

So please, sign your petition in support of a rigorous Stand-Your-Ground law today!

And there’s never been a better time for Iowa to do this.

Gun owners all over the state made their voices heard last Nov. 8 by obliterating the anti-gunners in the Senate who have been blocking this legislation for years.

Clearly there’s never been a better time to advance this in Des Moines!

Not only that, but the Des Moines Register’s own “Iowa Poll” — revealed this past weekend — showed that Iowans support a Stand-Your-Ground law by a whopping 54%-36%!

So there’s no reason to moderate or water down this bill.

Last year, our neighbors in Missouri passed their Stand-Your-Ground bill and it wasn’t watered down at all. Iowans deserve the same protections that gun owners in Missouri and dozens of other states enjoy.

We’ve fought for a long time to pass this, and exposed dozens of incumbent legislators in the process.

Now’s not the time to just ‘pass something,’ — but to pass the best bill possible!

So please sign your petition calling on your legislators to do just that.

And if you can, please help Iowa Gun Owners get the word out by chipping in a donation of any amount.

Already, we’re prepping radio and TV ads to support the bill on the Floor, as Bloomberg and his out-of-state money will undoubtedly be trying to crush the bill.

These were the same style of ads that educated and mobilized hundreds of thousands of gun owners last fall, who then went on to boot out anti-gun legislators en masse.

So please send help if you can!

Either way, please sign your petition, as that’s most important.

P.S. In throwing out all of the legislators who opposed Stand-Your-Ground law in the Senate last Fall, gun owners made it clear they support this language.

Last weekend, even the Des Moines Register’s own “Iowa Poll” made it clear that Iowans in general support this legislation by a massive 54%-36% majority!

So now is no time to water-down or hold back on this bill. The immunity language that’s been taken out needs to be added back in, to protect law abiding Iowans!

Please sign your petition today, calling on your legislators to support the most rigorous version of this bill possible!

And when you’re done, please consider a donation of any amount to help Iowa Gun Owners prepare for the onslaught that will hit Iowa as Bloomberg and his hordes begin to fight against this bill on the airwaves!