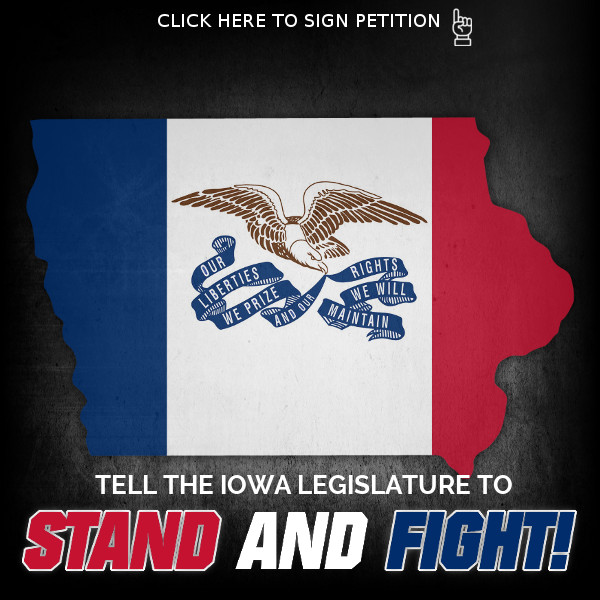 The entire political world changed overnight with the February 14 killings in Parkland, Florida that left 17 dead and another 14 wounded.

Our anti-gun media both nationally and here in Iowa are still doing all they can to “cash in” on those killings, effectively blaming law-abiding gun owners for the tragedy!

Never mind the fact that the gun-grabbers’ “fixes” don’t stop horrific events like in Parkland.  They cause them.

Never mind that the killer was already a well-known threat — forbidden from even showing up on campus with a backpack out of fear of what he might do.

Never mind the fact that the FBI was warned and the killer himself publicly admitted his goal was to become a “professional school shooter” online for all to see.

Never mind the fact at least one local law enforcement officer failed to enter the building to stop the killer as the shooting went on!

Never mind that this was yet another “gun free zone” attack where anti-gun bureaucrats had already disarmed any of the teachers or other school employees who could have shot back!

Now, even supposedly “pro-Second Amendment” politicians in Washington, D.C. and here in Iowa are fighting back with nothing but the white flag of surrender.

And if you and I don’t spring into action, I truly fear it’s going to get worse.

So won’t you please sign the enclosed STAND AND FIGHT petitions that we’ve prepared for you? More on that below.

As you’ll see, these petitions tell your State Representative and Senator to stop running in fear from anti-gun media elites.

Instead, you and I need to show them they’ll gain our full backing should they GO BACK ON THE OFFENSE for pro-gun reforms.

I know the media pressure is white hot.

I know gun-grabbers like Michael Bloomberg and his pals are doing all they can to drive up anti-gun hysteria.

But what they just don’t seem to get is the reason you and I are pushing so hard for pro-gun bills like Constitutional Carry, is precisely because we understand that no government paper-pushing system or “Gun Free Zone” sticker is ever going to save anyone.

We want more guns in the hands of the good guys because that’s the ONLY way to stop the bad guys!

If you agree with me, then please sign your petition calling on the Iowa legislature to stand up for gun owners by passing Constitutional Carry this session!

What’s the other option?

Hoping next time government agencies don’t drop the ball when they’re tipped off to a threat?

Hoping that some criminal thug wouldn’t dare steal a gun — even though he’s willing to commit murder?

Hoping a killer only kills a handful of people before someone with a badge and some guts shows up to stop him?

Are you willing to bet your life any of this will work?

Even the gun-grabbers know good and well none of it will.

They just view it as one more step to “cleansing” America of every last gun . . . except for the ones criminals will have pointed at us.

The very thought of that makes my stomach churn.

Many of our supposed friends tell us they agree — especially when they’re on the campaign trail running for office every two years.

But after Parkland, those promises have all but vanished.

In fact, thanks to your support and action, Constitutional Carry passed through a Senate Judiciary Subcommittee and was poised to pass through the full Committee the day after the Parkland shooting.

But then House Speaker Pro-Tem Matt Windchitl demanded it be pulled and ultimately got his way.

And he and his weak-kneed pals have been running scared ever since.

Tell them to FIGHT to advance the Second Amendment here in Iowa by signing your petition TODAY!

In just a few months, they’ll be back on the campaign trail telling us how much they support the Second Amendment.

Except this time, you and I will know that really means “except for when it really counts.”

As far as I’m concerned, this is flat-out unacceptable.

Even as I write you, he’s preparing some late-session fireworks to put Constitutional Carry back on the General Assembly’s agenda — and he’s not alone.

Instead of cowering with the rest of the cowards in Des Moines, he’s going to demand those who support the Second Amendment stand up and FIGHT BACK!

If passed, the Iowa Constitutional Carry Bill would restore the right of every law-abiding Iowa citizen to carry a gun to protect themselves and their families — WITHOUT going through a bunch of bureaucratic rigmarole!

That means no more expensive application fees, endless paperwork or adding your name to a government database just to exercise your Second Amendment freedoms.

And you and tens of thousands of people like you safely carrying firearms all over Iowa is what we need in order to prevent and stop horrific tragedies like we saw in Parkland.

No new gun control law either party cooks up will stop violent criminals.

But I’m really counting on your help to send that message, so please sign your petition TODAY!

One State legislator’s actions isn’t going to suddenly stiffen the spines of the pansies in Des Moines.  Neither is my work lobbying them until I’m blue in the face.

You and tens of thousands of other patriots all over Iowa can force them to act — the men and women our media HATES because we still “cling” to our guns and our precious constitutional freedoms.

So please agree to sign your STAND AND FIGHT petition to your State Representative and Senator right away!

And if possible, please agree to a generous contribution of $100.

I know that’s a lot.

But your legislators are getting earfuls from anti-gun lobbyists and their pals in the press.  They need to hear from us LOUD AND CLEAR immediately.

It’s time to STAND AND FIGHT like we never have.  If we don’t, I’m truly worried about what happens next.

P.S. After the Florida shooting, even supposedly “pro-Second Amendment” politicians in Washington, D.C. and here in Iowa are fighting back with nothing but the white flag of surrender.

And if you and I don’t spring into action, I fear it’s going to get worse.

So please sign your ‘STAND AND FIGHT’ petition immediately, calling on Iowa lawmakers to pass Constitutional Carry right away!