The fight for gun rights during the 2015 legislative session didn’t begin in January as many assume.

For Iowa Gun Owners, this fight began in the fall of 2014.

While many organizations get angry at betrayal and anti-gun voting records during the session, almost none have a program in place to hold those politicians accountable at election time to ensure that those politicians pay a price for their behavior.

As a result, they’re reduced to whining and begging for legislative scraps.

Iowa Gun Owners is committed to holding legislators accountable. Period. Whether they lose their seat or not – anti-gunners are going to pay a price for their actions in the legislature.

So in the Fall of 2014, we went to work exposing these guys all over the state – and many lost their re-election efforts as a result.

Most notable was that of former Senator Daryl Beall, a 12-year incumbent and long supporter and legislative champion of gun control in the Iowa Senate.

After running a months-long program in his district consisting of radio ads, direct mail, robo calls, emails, and dozens of volunteers going house-to-house, the voters had heard enough and booted Beall from office.

The same happened to anti-gun legislators and legislative candidates all over Iowa.

Without this program in place, you have little ability to make progress during the session, because anti-gun politicians know they have nothing to fear.

So this year, when the legislature convened, anti-gunners in the Senate were determined to buy off gun owners with something, anything, so that they could tell gun owners in 2016 that they are actually pro-gun.

(This is going to be a reoccurring theme throughout our overview of what happened in 2015.)

So after the elections, Iowa Gun Owners decided to make a major push in 2015 to see Stand-Your-Ground law advanced in the Senate. We partnered with pro-gun champion, Senator Rick Bertrand for this project.

Bertrand, who had just won his re-election campaign by a huge margin, had been a leading pro-gun voice in the Senate during his first four years in elected office and he was happy to be the lead sponsor and spokesperson for this legislation.

Once Senator Bertrand agreed to sponsor Stand-Your-Ground, we set about working the phones to rally senate co-sponsors.

Many legislators, having seen the toll that gun owners extracted from anti-gunners during the elections a month prior, quickly agreed to back this legislation. 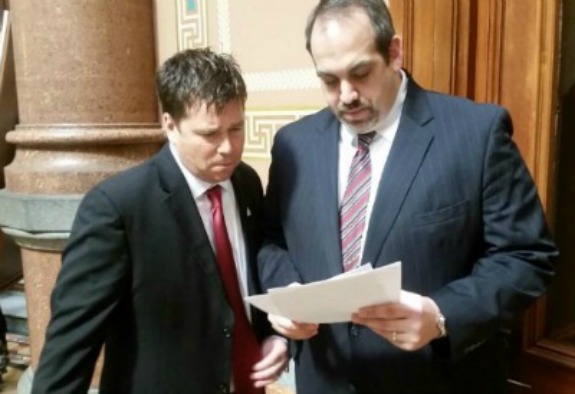 So before the gavel even fell on the opening day, Stand-Your-Ground law was well on its way to making a major move.

Once the legislature convened for the year, we urged you to get involved in this fight.

After all, the ‘secret’ to IGO’s strength is grassroots gun owners like you all over the state who tirelessly send the emails and make the calls necessary to spurn their legislator to action.

You inundated the legislature with calls and emails so much that one legislator told me, “Enough! I’m going to co-sponsor, but I can’t keep up with all this traffic in my in-box!”

That’s why by the end of January, just two weeks after the session convened, Iowa Gun Owners rolled out a whopping 24-cosposnors to SF137, the Iowa Stand-Your-Ground Act! We were just two votes short of passage. 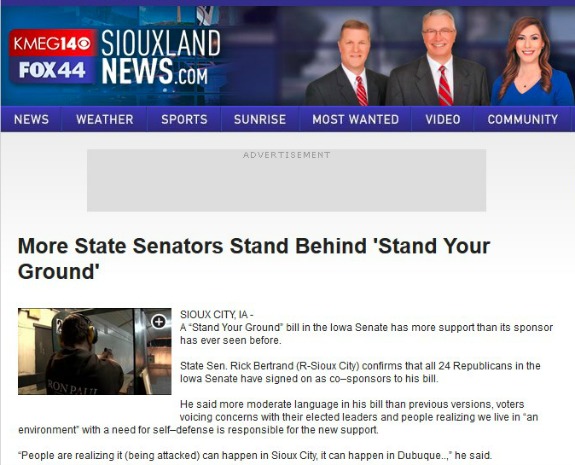 (A stunning 24 cosponsors backed SF137, the Stand-Your-Ground Act during the 2015 session – here being reported by KMEG 14 out of Sioux City.)

None of this just happens.

It’s the result of a program to hold anti-gunners accountable at election time, months of planning, and a massive amount of activism on your part.

While all this was happening publicly, we were also busy working behind the scenes to rally support from other gun rights organizations at the state and federal level.

In late January, letters were sent to the NRA, Gun Owners of America (GOA), National Association for Gun Rights (NAGR), and the in-state Iowa NRA affiliate urging them to get their members involved in the fight that was about to commence in Iowa.

GOA and NAGR were quick to agree to fight alongside of us. NAGR, in particular, mobilized gun owners in Iowa via email and Facebook repeatedly and they have our thanks.

Sadly, the NRA and their affiliate in Iowa never responded and never joined in our fight to advance Stand-Your-Ground law during the 2015 session – despite the overwhelming grassroots support this legislation enjoyed.

At the same time, we wrote official letters to the newly appointed Judiciary Chairman, Steve Sodders, on January 27 urging quick action on this legislation.

(Incidentally, the long-time anti-gun Chairman of this committee, Keith Kreiman, was booted out of office previously due in large part to his overt hostility to pro-gun legislation.)

Steve Sodders quickly made it clear that he is in office to do the bidding of Iowa’s elite anti-gun lobby: the Iowa State Sheriff’s and Deputies Association (ISSDA).

As a reminder, the ISSDA is a taxpayer funded organization in Iowa that used to be pro-gun.

These days, sadly, the ISSDA’s legislative committee is comprised almost exclusively of liberal, anti-gun sheriffs and deputies and they wage a constant battle against pro-gun legislation in the Capitol.

Chairman Sodders worked with Senate Majority Leader Mike Gronstal to begin to blockade Stand-Your-Ground, assuming that there would be little pushback.

But he was wrong about that.