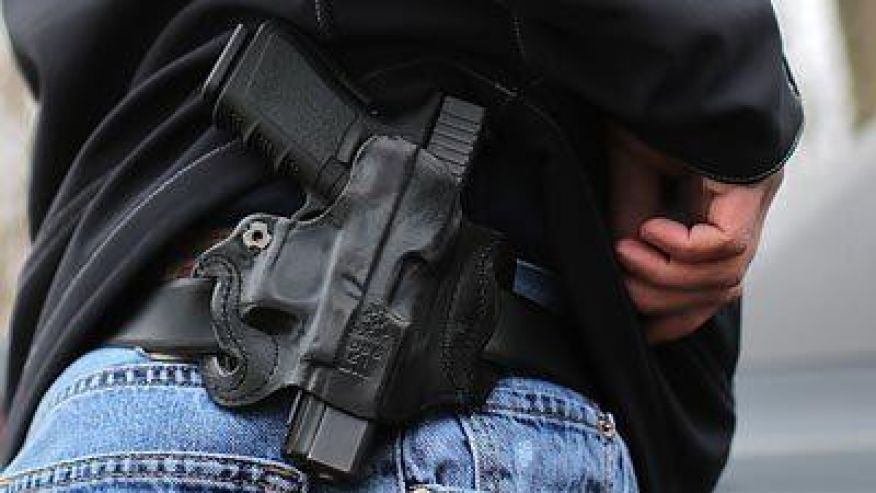 In just a couple of months, Iowa troopers, deputies, and municipal police officers may be tasked with enforcing the first wave of gun control coming out of the Biden White House.

The ATF’s proposed regulatory changes on how they classify pistol braces and ‘80% lowers’ have been published, are currently receiving public comments, and are widely expected to be made official this fall!

This very literally means that tens of thousands of Iowans who own 80% lower based firearms or a pistol brace could be made into criminals overnight by Joe Biden, through his Executive Action.

And should these items be outlawed, Iowa cops will be expected to carry out the enforcement of these new regulations!

That’s why it’s absolutely vital that the legislature passes the Second Amendment Preservation Act (AKA SAPA) to make sure that our gun rights are protected here in Iowa!

So please sign your OFFICIAL PETITION telling your State Senator and State Representative to make this their number one priority when session resumes.

To be clear, gun owners still have a strong chance of defeating much of Joe Biden’s war on the Second Amendment in Congress. While multiple gun control bills have passed the House of Representatives, Chuck Schumer can’t get the votes he needs (at least not yet) to pass them in the Senate.

But that’s not going to help us when it comes to Biden’s Executive Orders that are attacking our gun rights! For this, we need the Second Amendment Preservation Act!

SAPA legislation would nullify federal gun control laws here in Iowa by requiring Iowa’s state troopers, county sheriff’s deputies, and city police officers to ONLY enforce guns laws that have been passed by the Iowa legislature.

So Joe Biden could sign whatever Executive Orders his America-hating advisors tell him to sign, but they damn well won’t be enforced by cops here in Iowa!

Sound too good to be true?

SAPA legislation is based on the Constitutional ‘anti-commandeering doctrine’ which states that the federal government may not simply ‘commandeer’ the state’s legislative authority and make them enforce laws that are contrary to state law.

What’s more, the United States Supreme Court has upheld the anti-commandeering doctrine for hundreds of years in a broad array of cases, including:

>>> The 2018 Murphy v NCAA decision, where the Court affirmed that the state legislature in New Jersey had the right to place restrictions on sports gambling, even though the new state law contradicted federal law.

>>> The 2012 ObamaCare case (NFIB v Sebelius,) where the Court cited the anti-commandeering doctrine again,  as they affirmed the states’ right to refuse to expand Medicare.

>>> The 1997 Printz v United States decision, where the Court agreed with Sheriffs’ Jay Printz and Richard Mack that they could not be forced to enforce the Brady Gun Control bill.

>>> The 1842 Prigg v Pennsylvania decision, where the Supreme Court held that the federal government could not simply force the states to enforce the Fugitive Slave Act of 1793.

So it’s clear that the Supreme Court agrees that the states are sovereign entities that have the absolute right to refuse to enforce federal laws that don’t align with state law.

And while the leftists in D.C. can scream and shout about the Supremacy Clause all they want; they have been ignoring federal laws thy disagree with for over a decade when it comes to marijuana and sanctuary cities for illegal aliens.

Clearly, we can use SAPA law to stop the enforcement of Joe Biden’s war against gun owners, too!

But for this legislation to be effective, it absolutely must have teeth, or it will be ignored by anti-gun mayors and department heads here in Iowa.

You see, the idea of nullifying federal gun control isn’t new. In fact, when Iowa Gun Owners got started back in 2009, everyone was talking about the ‘Firearms Freedom Act’ to stop Obama’s expected war against gun owners.

This old legislation had a major flaw, however, in that it required the State Attorney General to defend a gun owner whose gun rights were being violated by government officials.

As we all know, trusting any Attorney General to stand in the gap for gun owners is just wishful thinking, and that goes doubly true with Iowa’s AG Tom Miller!

Our SAPA legislation is much different. The bill we are pushing in Des Moines allows individual gun owners to bring government agencies who violate SAPA law (and their gun rights) to civil court on their own initiative to seek relief.

Doing this not only gives our SAPA legislation real teeth, it also protects Iowa’s peace officers in a very real way.

You see, we are already hearing from troopers, deputies, and city cops who are concerned about being ordered to enforce gun control — which would force them to violate their oath to the Constitution or lose their job.

SAPA legislation protects Iowa’s peace officers from having to choose between enforcing unconstitutional federal gun control laws or losing their job, by allowing them to point to Iowa’s SAPA law and remind their department that enforcing Biden’s gun control agenda would be a crime!

And now that our sister organization passed this identical law in Missouri, SAPA is spreading like wildfire in other ‘red states’ across the country including Wyoming, Georgia, Nebraska, Ohio, and Idaho, just to name a few.

But you and I both know that passing this legislation will not happen without a fight in the Capitol. It took thirteen years to force the legislature to pass Constitutional Carry law. We can’t afford even thirteen months when it comes to SAPA!

We’re going to need to pour on grassroots pressure.

After you sign it, you’ll be taken to a confirmation page and given the opportunity to donate, to help us fight for this critical legislation. And I hope you’ll be generous!

In fact, I hope that with everything we are facing, you’ll consider a gift of $100 or even $250 to help us implement this program.

I know it’s a lot, but we are using everything from digital ads, targeted social media, mass email broadcasts and direct mail to get Iowans involved in this fight.

It’s going to take a lot of grassroots pressure to move this bill, but we can’t afford to sit back and just hope for the best — not with the ‘80% lower’ and pistol brace regulations just months away from being implemented!

Iowa Gun Owners members have accomplished so much over the last thirteen years since we got started. ‘Shall Issue’ law was passed in 2010 due to you. 2017’s Stand-Your-Ground law was passed because of you. This year’s Constitutional Carry law was passed by politicians who feared you!

But the truth is that we could lose all of this, along with our AR-15’s, our mags, and our right to privately owned firearms if Joe Biden gets his way.

SAPA law is how we hold the line! So please immediately sign your petition, and make an immediate donation so Iowa Gun Owners can FIGHT FOR YOU!

P.S. The first round of Joe Biden’s Executive Orders (regulating pistol braces and 80% lower receivers) will likely be official in just a few months — which could lead to even more next year.

But Iowa can stop Biden’s war on guns with the Second Amendment Preservation Act, which would tell Iowa cops to enforce Iowa law when it comes to firearms, ammo, and accessories!

Missouri passed SAPA law earlier this year, and it’s on the move across the country. Now, it’s Iowa’s turn. Sign your petition telling your lawmakers to pass SAPA when session resumes!