Whether by direct mail, email or social media, thousands of your fellow Iowans have signed their petition opposing ‘Red Flag Gun Seizures’ — and have had their name entered to win a SIG P229 from Iowa Gun Owners!

As you know, from the US Senate to the Iowa House of Representatives, Republicans are lining up in support of this due-process shredding legislation.

So please join with the massive number of Iowans who are opposed to this terrible legislation, by signing your petition against it today!

If you do so before October 26, your name will be automatically entered into our drawing to win a SIG P229!

And please remember, if you make a donation to help IGO maintain this fight against ‘Red Flag Gun Seizures,’ I would be very grateful.

As our way of saying thank you, if you make a donation of $35 or more right now, we’ll send you a free T-Shirt right away!

The Presidential election is just over a year away.

Gun-grabbers and their pals in the fake news media believe they’re finally set to “cash in” on the pure political poison they’ve been flooding our airwaves with ever since election night of 2016!

Even though the Mueller investigation is long over, concluding that President Trump did nothing wrong during the elections, radical liberals still believe that they are in the driver’s seat for 2020 — especially with the media in their back pocket.

They know that legislative moderates in Des Moines killed EVERY pro-gun bill that IGO filed this year and that radical gun-grabbers are gaining momentum in the Capitol by the day!

All of this has gun-grabbers here in Iowa licking their chops — convinced that next year will be their time to ram ‘Red Flag Gun Seizure’ legislation into law, the same bill that other ‘red states’ like Florida enacted just last year.

They believe after the mass shootings in El Paso, TX and Dayton, OH, that the media-driven anti-gun hysteria which followed and the fact that lawmakers in Des Moines are waving the White Flag over the Second Amendment  —  gun owners like you and me will just be too disillusioned to fight back in the Capitol next year!

That’s why I hope you’ll sign your ‘No Way on Red Flag Gun Seizure Legislation’ petition, letting me know you’re not going to just sit on your hands as legislative moderates betray our gun rights next session!

This is the gun the Secret Service uses to protect President Trump from the hordes of violent anti-gun leftists — like the one who attempted to shoot up the President’s Miami golf resort not too long ago! 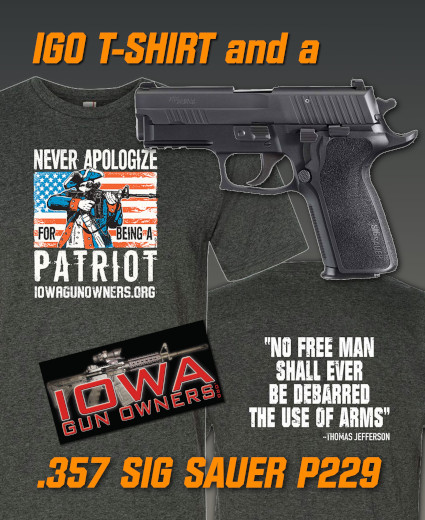 And while Iowa Gun Owners has done some gun giveaways in the past, this one is special.

We are doing this now because our team needs to gauge Second Amendment supporters’ grassroots energy FAST.

You see, the anti-gun activists who are pushing for a repeal of Stand-Your-Ground law and a ban on the AR-15 are more than willing to settle for passage of ‘Red Flag Gun Seizure’ legislation next session.

Far worse than a simple ban on the AR-15 or 30 round magazine, ‘Red Flag Gun Seizure’ legislation is the worst gun control bill you can imagine.

>>>   These gun seizure orders will be issued before you have
been convicted, or even charged, with anything!

A gun owner with absolutely no criminal background of any kind, can have his firearms seized before he ever sets foot in a courtroom. You would have more due process rights in traffic court than you would in defending your constitutional right to keep and bear arms.

>>>   The hearing that determines whether or not to strip you
of your firearms happens in secret!

Known as ex-parte proceedings, these hearings take place in your absence. You will have no ability to question your accuser, provide your own evidence, or testify in your own defense. In fact, the first time you will be made aware of this is when law enforcement officers come to your home to seize your firearms.

>>>   The mere fact that you recently purchased a firearm or
any ammunition constitutes evidence that can be used
against you!

Under the list of ‘evidence’ that the court can consider in deciding to disarm you is the ‘recent acquisition of a firearm, ammunition, or other weapons.’ So just buying a firearm or a box of .22’s could be enough for a judge to order you stripped of your firearms.

I hope you agree we cannot allow this madness to happen.  Instead, we have to FIGHT BACK now — before it’s too late.

If you agree, I’m counting on your IMMEDIATE action:

If you do, your name will automatically be entered to win a .357 Sig Sauer P229 — the gun the Secret Service uses to protect the President;

If that’s too much, please just give whatever you can afford, but note that any donation of $35 or more means that we will send you a FREE IGO MEMBER T-SHIRT!

Your generosity will help us get prepared for what could become an all-out battle over stopping ‘Red Flag Gun Seizure’ legislation next year.

I hope you know that you’re a critical part of IGO’s winning team, the team that flipped the Iowa House and Senate in the last couple of election cycles, and passed Stand-Your-Ground law here in 2017.

But we’re at a critical juncture here, with a growing number of ‘red states’ passing ‘Red Flag Gun Seizure’ legislation over the last year and a half — not to mention the fact that moderates in Des Moines killed every single pro-gun bill this year.

So please sign your petition and agree to a generous contribution of $100, $50, $25 or whatever you can afford today!

P.S. Will you please sign your ‘No Way on Red Flag Gun Seizure Legislation’ petition?

If you do, your name will be entered to win a special .357 Sig Sauer P229 on October 26th — the gun the Secret Service uses to protect President Trump from the hordes of violent anti-gun leftists!

And if at all possible, please agree to a generous contribution of $100, $50, or at least $25 right away  — remembering that your gift of $35 or more means that we will rush you a FREE IGO T-Shirt and decal!