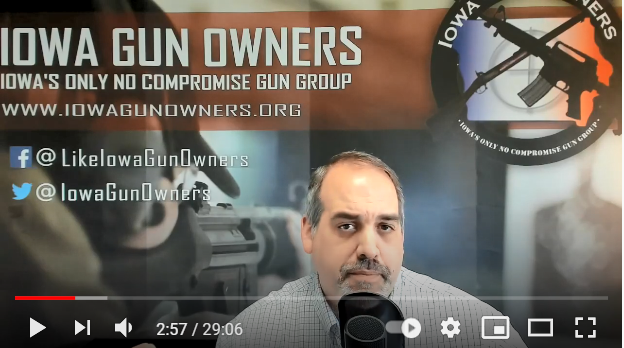 It’s been almost two weeks since the Iowa legislature passed Constitutional Carry law, a monumental advancement in Second Amendment freedom for law abiding Iowans who are sick of being tracked, traced, and registered like criminals, just to carry a gun.

But Governor Reynolds has still not taken up this bill and has been evasive when asked by the media if she will sign or veto it.

Hundreds of you have contacted Iowa Gun Owners over the last week and asked if we think that the Governor is intending to veto this legislation, as Republican Governor Mary Fallin did in Oklahoma three years ago.

For the answer to this question and all of the latest on our fight to make Iowa a Constitutional Carry state, check out our video report below.

As you just heard, it would be a grave mistake to sit back and hope for the best where Constitutional Carry law is concerned, as gun owners have been betrayed on this issue repeatedly.

So please take action right away, and help us finish this fight!

>>> Make a donation to Iowa Gun Owners; we need your support!

>>> Share this email/video with every gun owner you know; tell them it’s time to get off the bleachers and onto the field!

We’re so close to making Constitutional Carry law here in Iowa, but until Governor Reynolds signs this, we ARE NOT out of the woods.

P.S. Iowa Governor Kim Reynolds has taken no action on Constitutional Carry law, almost two weeks after the legislature passed it. Worse, she’s evasive when asked what she will do with this critical legislation.

Watch our video update on the fight to pass Constitutional Carry law here, and then take action, using the links provided above!