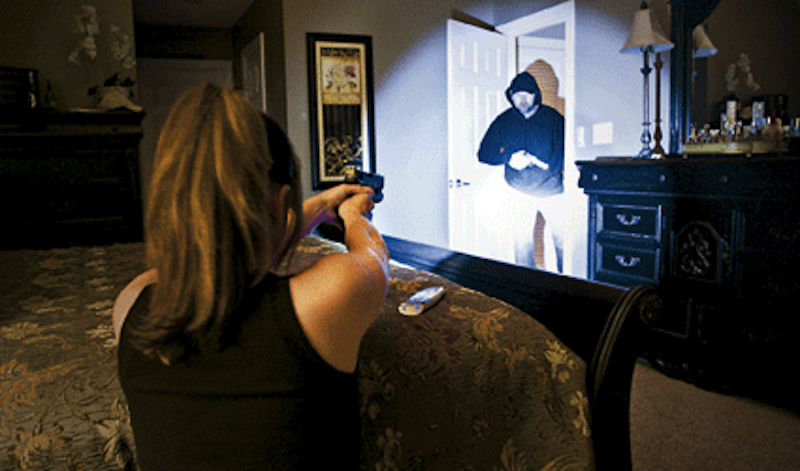 In 2015, New Jersey resident Carol Browne was being stalked by a violent ex-boyfriend, Michael Eitel, and she told the authorities that she was in fear for her life.

But due to the disgusting gun laws in New Jersey, Browne had to get permission from the state to be able to buy a handgun, a process that can take weeks or even months to complete.

Meanwhile, Browne did everything else she could think of.

She obtained a restraining order against Eitel, she made repeated trips to the local police department to check on the status of her permit application, and she had a surveillance system installed around her home.

In the end, all Browne’s surveillance system was good for was capturing her own murder, as Eitel surprised Browne as she got of her car late one night, stabbing her repeatedly before fleeing the scene.

Carol Browne is just one of many people — most of them women — who were raped or murdered by a violent criminal while they waited for government permission to buy a firearm.

It may be easy to think, ‘Well, that’s New Jersey for you. Terrible laws, but they don’t apply to me here in Iowa.’

But if Joe Biden and Nancy Pelosi are able to pass their gun control agenda — which includes the newly filed H.R. 125 — Iowans would be forced to live under the same sort of waiting periods laws that gun owners in New Jersey have to!

Fight back against H.R. 125 – send your PRE-WRITTEN EMAIL to Senator Grassley and Ernst (and your Congressman) NOW!

H.R. 125 would force you to wait nine days before you could buy any semi-automatic firearm or magazine that holds over ten rounds of ammo.

And since this is federal legislation, if passed, Iowans will have to live under the same tyrannical laws that got Carol Browne killed in New Jersey!

These waiting periods won’t stop a single violent criminal from attacking an innocent person; on the contrary, these laws will only encourage criminals, knowing that their intended victims are even more unlikely to be armed, thanks to H.R. 125.

And they damn sure wouldn’t have done anything to stop the Antifa and BLM terrorists who rioted, burned, looted, and shot their way across America last summer!

But we all know the truth.

This legislation was never intended to stop violent crime.

Bills like H.R. 125 are designed for just one reason: to allow Joe Biden and his Department of Justice to demonize, harass, prosecute, and incarcerate law abiding gun owners for committing ‘crimes’ like buying a Glock 9mm without waiting for nine days.

Send your PRE-WRITTEN EMAIL against H.R. 125 right away!

Remember, bills like this, which include a grandfather clause that allows you to keep the guns and magazines that you currently own are especially dangerous — in fact, it’s a straight up trap!

Pelosi and her ilk in Congress hope that gun owners who already own the firearms and magazines that they want to own will sit back and say ‘Ah, bills like that don’t apply to me. I already got mine!’

If you and I fall for that and don’t fight back against each and every gun control bill coming out of Congress or the statehouse right now, our children and grandchildren will be the ones who pay for our unforgivable laziness!

As gun owners, we owe a lifelong debt of honor to our Founding Fathers and the generations of gun owners who came before us and ensured that our right to keep and bear arms.

And the way we pay that debt is by digging in — right now in 2021 — and doing EVERYTHING we can to ensure that the freedoms afforded to us by God and codified in the Second Amendment don’t perish on our watch, but are there for future generations!

Help us fight back, send your email to Congress now!

When you’ve sent your email, please make a donation to help us push back against Joe Biden’s gun control agenda.

We are doing everything we can to mobilize gun owners into taking action against the threat to our gun rights — both here in Iowa and in Congress — using radio ads, digital ads, email, and direct mail programs and more.

But we need your help to keep these programs running.

Whatever you do, please send your pre-written email right away, and share this email with every gun owner you know so they can make their voice heard!

Then make a donation, of any amount, to help Iowa Gun Owners get the word out about this bill and keep the heat on the politicians in Des Moines and in Congress!