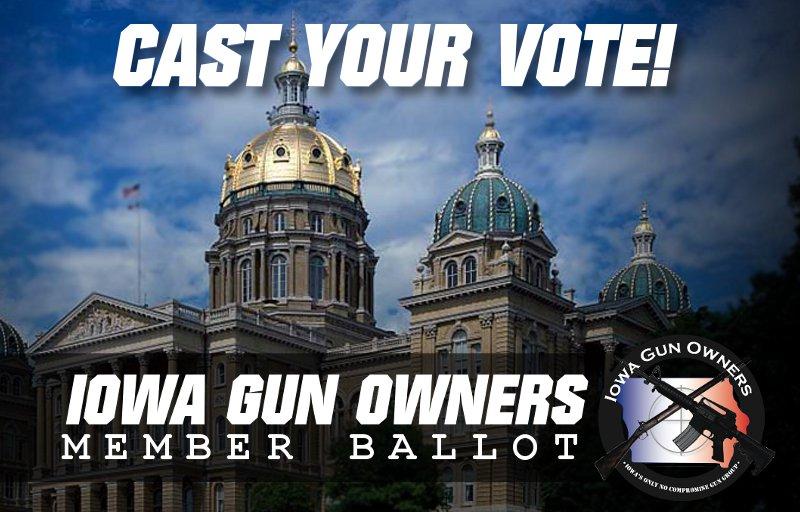 If you had told me a couple of weeks ago that the Iowa General Assembly would be just days into the 2017 session, and I’d be rushing to write you this emergency letter, I never would have believed it.

By any measure, the victories Second Amendment supporters won here in Iowa on November 8 were shocking . . .

Today, BOTH houses of the Iowa General Assembly boast pro-gun majorities to go along with a Republican Governor — the first time this has happened since the 1990’s!

And with Governor Branstad’s appointment as Ambassador to China — and Lt. Governor Kim Reynolds set to become Iowa’s next Governor — the timing has never been better to GO ON THE OFFENSE!

You see, as a state legislator, Kim Reynolds voted FOR Constitutional Carry.

And she knows, with a tough 2018 Governor’s race awaiting her, should she choose to betray Iowa’s Second Amendment supporters now, she’ll only be asking for a primary showdown.

But honestly, I’m worried stiff that Iowa Gun Owners’ plans for 2017 won’t be able to get off the ground . . .

So with the Iowa General Assembly having just kicked off, I need your advice.

As you’ll see below, I’ve included a critical Member Ballot with this message, and I hope you’ll fill it out and submit it to me IMMEDIATELY!

The truth is, money is tight. Too tight, after I unloaded Iowa Gun Owners’ bank accounts in the lead up to Election Day 2016.

With everything that was at stake in 2016, I don’t regret that decision at all.

But the hard-fought victories for Second Amendment supporters — like the DEFEAT of Senate Majority Leader Mike Gronstal, Senate Judiciary Chairman Steve Sodders and others — have come at a price.

So today, I need you to tell me where to focus.

According to Guns & Ammo Magazine, there are only 12 states in the country today with WORSE gun laws than Iowa.

A big reason why, is our state’s lack of a Stand-Your-Ground Law.

Without Stand-Your-Ground law, many gun owners who use their firearms to fend off criminal attack often find they’re little more than sitting ducks for anti-gun judges and prosecutors.

In fact, you may remember the story of Jay Rodney Lewis from right here in Iowa. He was a concealed carry permit holder, a former security officer, and ex-law enforcement official.

After using a gun to defend himself from attack by two thugs — one with over 40 criminal convictions going back 15 years — he spent 112 days in jail before finally being found innocent!

In the meantime, he lost his home and most of his possessions — including his gun collection.

I’m sure the gun-grabbers think to themselves, “That serves him right!”

After all, whenever some thug commits a horrific crime, don’t the gun-grabbers always rush to place blame — not on the criminals themselves — but on law-abiding gun owners?

So is it really any surprise they’ve written Iowa law to protect criminals, madmen and Islamic radicals first — even when it’s your family’s safety at stake?

I don’t know about you, but I believe the law should put the interests of law-abiding Iowans ahead of thugs and madmen.

Today, with the threat from madmen and ISIS-inspired terrorist wannabees increasing, Stand-Your-Ground has never been more important.

After all, do we really want law-abiding gun owners to be worried about what an anti-gun prosecutor or judge might think, in a situation where dozens of lives are on the line?

So if you think passing Stand-Your-Ground is most important, please mark “OPTION #1: PASS STAND-YOUR-GROUND” on your Member Ballot.

But before you do, first consider the opportunity we have with Constitutional Carry.

If passed, Constitutional Carry would restore the right of Iowa citizens to carry a firearm to protect themselves and their families –- WITHOUT going through a bunch of bureaucratic rigmarole or paying expensive fees.

These reforms are on the march all over the country. In fact, just in the past two years, Constitutional Carry has passed in Kansas, Maine, Idaho, West Virginia, Mississippi and Missouri.

Before being selected as Ambassador to China, Governor Branstad stated he would sign the bill. And as I mentioned, his successor — Lt. Governor Kim Reynolds — voted for the bill as a state legislator.

So there’s no reason why Constitutional Carry shouldn’t soon be reality here.

So if you think Constitutional Carry should be our top priority, please mark “OPTION #2: PASS CONSTITUTIONAL CARRY” on your Member Ballot.

I’m sure you can see why I’m so torn. There just aren’t any easy options.

The truth is, I’d can’t imagine being forced to hold back on either of these fights with the gun-grabbers — not after what we accomplished on November 8!

But I have to face facts. As it stands today, I just don’t have the resources to run the kind of programs needed to secure the victories Second Amendment supporters deserve.

That’s why I’m counting on you to please fill out and return your Iowa Gun Owners’ Member Ballot and tell me where to focus by clicking below.

Of course, when you do so, you’ll notice I’ve included one more option that I haven’t yet mentioned.

That’s “OPTION #3: PUSH HARD ON BOTH STAND-YOUR-GROUND AND CONSTITUTIONAL CARRY! DON’T GIVE AN INCH!”

This is the option I’m hoping you’ll choose.

But before you consider making this selection, please understand just how serious this situation is.

Without a massive influx of funds, I won’t be able to run a full campaign on either of the issues I told you about.

Frankly, I can’t even think about running any one of these programs half-hearted.

Billionaire anti-gun activist Michael Bloomberg and his cronies will sniff out our weakness and become emboldened to jump into Iowa with both feet!

That’s why my hope is that you will agree to a generous gift of $100 right away.

I know that’s a lot. I know I’m asking you to stretch.

But the work you and I have ahead of us in 2017 is some of the most important in our history.

With time running out before the General Assembly convenes, I simply must hear from you right away.

Please fill out and submit your Member Ballot right away.

And please consider your most generous contribution of $100, $50 or at least $25 right away.

P.S. Without a massive influx of funds, I simply can’t do everything that needs to be done.

With big opportunities to move forward with both Stand-Your-Ground and Constitutional Carry, I’m afraid this is bad news.

So I need you to tell me where to focus.

Please fill out your Member Ballot and submit it to me right away!

Please also consider your most generous gift of $100, $50 or at least $25, right away, to help us run the programs that you’ve selected!