Will You Help Us Keep These Ads Running In Iowa?

Will You Help Us Keep These Ads Running In Iowa?

Moments ago, I finished a long phone call with our chief bill sponsor in the Iowa State Senate, Senator Rick Bertrand, about the current status of Stand-Your-Ground law here in Iowa.

And I can tell you this, as a result of all your phone calls, Facebook messages, emails, and personal visits with your legislator at weekend forums – the anti-gun members of the Iowa Senate are in a complete tizzy.

They know that they’re in a bind.

Either they can pass this bill through the Senate, and risk losing some of their caucus at the next election cycle who vote against your right to self-defense – or continue to blockade the bill in which case they’ll be held responsible for killing SF137.

While I can’t speak for all of you, the resounding message that I have heard from thousands of members all across the state in the past few weeks is to press ahead at all costs, and to do all we can to obtain a vote on Stand-Your-Ground law in the State Senate.

So today I am asking for your help.

Multiple inside sources indicate that he is getting hammered with good old-fashioned grassroots attention from gun owners like you who are sick and tired of him blockading Senate File 137, the Iowa Stand-Your-Ground bill.

And that’s why I’m writing you today, asking you to enable me to increase the pressure even more, by funding the state-wide media blitz that Iowa Gun Owners kicked off just this morning! More on that in a minute.

Stand-Your-Ground is very simple: if you are attacked in a public place that you are lawfully allowed to be, you would be enabled to defend yourself without having to retreat first.

Dozens of states already have laws like this on the books, including neighboring Illinois, not otherwise known for being friendly to gun-owners.

But Chairman Sodders, to date, is trying to kill this bill.

As a result, law-abiding Iowans will continue to go to jail for defending themselves or their loved ones from violent criminal attackers.

Jay R. Lewis, who we have talked much about this year, is a tragic case study that occurred just a few minutes away from the Iowa Gun Owners office.

After demanding that the violent criminals who were attacking him “get back,” eleven times, according to the 911 audio, Mr. Lewis was forced to defend himself by firing a single shot from his .380 handgun.

Thanks to the anti-gun County Attorney in Polk County, Mr. Lewis ended up serving 112 days in jail with a bond he simply could not pay.

A jury of his peers found him “not guilty” in 90 minutes, but the damage had been done, as Mr. Lewis had lost his job, his apartment, and had all of his possessions put out on the street corner – all because he did not retreat further before defending himself.

If we had Stand-Your-Ground law, Jay Lewis would never have been arrested, much less have his entire world turned upside-down.

While powerful political forces in Iowa are strongly encouraging Iowa Gun Owners to take the pressure off legislators like Steve Sodders, I can assure you that we’re doing no such thing.

In fact, moments ago, I finished a call with IGO’s media consultant and have approved a state-wide media buy that kicked off this morning, highlighting Chairman Sodders’ refusal to defend law-abiding Iowans.

These ads will be running on WHO radio in Des Moines, covering almost the entire state.

But I need your help.

Running these ads, across a multitude of media formats, is going to be expensive.

But, factoring in all the various media formats that we’ll be airing this spot, we’re looking at a more manageable $41.10 per spot price.

Will you help us keep this ad on the air? 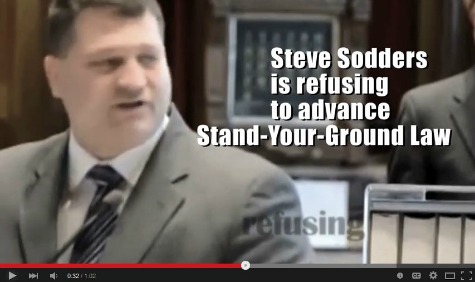 We simply must double down the pressure on Chairman Sodders!

The alternative is to sit back while more law-abiding gun owners are thrown in jail by anti-gun prosecutors, just because they defended themselves or their loves ones.

All we know is that as long as Chairman Sodders believes the pressure on him is dying down, the chances of him passing this legislation through his committee get slimmer.

That’s why I’m urging you to help us double down the pressure on Chairman Sodders.

Perhaps you can afford more than one ad.

Imagine the satisfaction you’ll feel, knowing that this radical anti-gun Senate Judiciary Committee Chairman is getting inundated with phone calls thanks directly to your contribution!

That’s why I hope you’ll do all you can to help us keep these ads on the air!

So whether you can cover one ad for $41.10, or you can partner up with some of your friends from the gun club and cover 10 ads, I hope you’ll do whatever you can, TODAY!

Chairman Sodders and the rest of the anti-gun members of the Iowa State Senate are desperately hoping that you and I will go away.

They are desperately hoping that they do not have to vote on this bill.

They are desperately hoping that you and I simply tire of trying to advance our gun rights here in Iowa.

I don’t know about you, but I refuse to let that happen!

The ads that I have linked you to above will be running all week long, thanks to a select number of IGO donors who feel very passionate about this issue.

My hope is to extend the length of these ads, and even target other anti-gun members of the Iowa Senate with additional ads.

So please be as generous as you can, I don’t want to meet any more Jay R. Lewis’ in my office – law-abiding Iowans whose lives have been turned upside down by a vicious system that does not always appreciate your right to keep and bear arms.

Please do what you can today!

P.S. Despite multiple messages being conveyed to our office to back off of anti-gun Senate Judiciary Committee Chairman Steve Sodders, Iowa Gun Owners isn’t backing down.

Moments ago, I approved a huge media buy, that will run on state-wide radio this week, to highlight Senator Sodders’ refusal to advance S.F. 137 – the Iowa Stand-Your-Ground law.

These ads are running now, thanks to some select IGO donors who wanted to make this program a reality.

But I hope to do more. I hope to target additional members of the anti-gun leadership in the State Senate and extend these ads into next week as well.

And for $411.00, you can sit back and know that hundreds of thousands of Iowans will be made aware of Senator Sodders’ refusal to stand up for law-abiding gun owners in Iowa.

Whatever you can afford, whether one ad or ten, please do it TODAY.

We have to make critical decisions about next week’s ads, in only a matter of days.