Skip to content
From the Desk of Senator Rick Bertrand 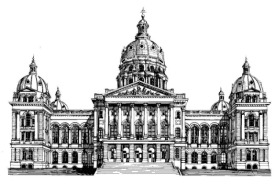 But Iowa Gun Owners Executive Director Aaron Dorr, a good friend of mine, tells me he hasn’t yet heard from you about renewing your membership in Iowa Gun Owners for 2018.

If you’ve already renewed your membership for 2018 and you are receiving this message by mistake, I sincerely apologize.

But if you haven’t yet done so, won’t you please take a moment to complete your Iowa Gun Owners’ 2018 Membership Renewal form and submit it back to Iowa Gun Owners IMMEDIATELY?

More on that in a moment.

The truth is, I believe this upcoming session of the Iowa General Assembly will be absolutely critical for Second Amendment supporters.

And then they saw IGO members FORCE passage of Stand-Your- Ground — despite the wishes of some supposed “allies” in the General Assembly who worked hard to weaken this bill behind the scenes.

But they believe the political winds are changing nationally — especially after the recent mass murders in Las Vegas.

And the Gun Control Lobby believes that if they can STOP Constitutional Carry without so much as a public, roll-call vote during the next legislative session, they can then mount a challenge to take back control of the Iowa House and/or Senate and our Governor’s Mansion in November 2018!

You and I can’t let them get away with it.

That’s why — if you haven’t yet done so — it’s so critical you renew your membership in Iowa Gun Owners right away.

The best way to tell BILLIONAIRE gun-grabbers like Michael Bloomberg they’re not welcome in our state is by finally passing Constitutional Carry.

If passed, the Iowa Constitutional Carry Bill would restore the right of every law-abiding Iowa citizen to carry a gun to protect themselves and their families — WITHOUT having to beg government permission or add their name to a government database!

That means no more expensive application fees, endless paperwork, or carrying around a plastic-coated permission slip — just to exercise your Second Amendment right to keep and bear arms.

This is the way it’s been done in Vermont, Alaska, Arkansas, Arizona and Wyoming for some time.

There’s no reason why it can’t happen here.

While we must always remain vigilant against gun control threats, with a tidal wave of grassroots support from good folks like you, I’m confident we can force votes in BOTH houses of the General Assembly on Constitutional Carry.

And even if we don’t get the votes to pass it this year, it will still be a MAJOR step forward for our gun rights.

Politicians who choose to vote against Iowa’s Second Amendment supporters — the “wolves in sheep’s clothing” in Des Moines — will find there’s a major political price to be paid.

Of course, it will take a massive outpouring of grassroots action to ensure Constitutional Carry is pushed to the top of the General Assembly’s agenda for 2018.

That’s why I hope that you’ll renew your membership in Iowa Gun Owners for 2018 RIGHT AWAY!

But if we can force a public, roll-call vote, it would be a massive step forward — and put Second Amendment supporters in the driver’s seat as November 2018 approaches.

And in 2018, they’re preparing to conduct the biggest and most aggressive election year program in IGO’s history — if they can raise the resources.

That means mail, email, social media, and even hard-hitting radio and online ads to ensure Iowa’s Second Amendment supporters know the TRUTH about where their candidates stand on critical gun rights issues.

That’s why I hope that you’ll take action right away, and renew your membership in Iowa Gun Owners TODAY!

Once exposed, opponents of Constitutional Carry in BOTH parties are going to run into a buzz saw at the ballot box — just like in 2016!

Of course, none of the plans IGO has for 2018 are going to be cheap. But that’s what it will take to get the job done.

That’s why I was a little saddened to hear Aaron hadn’t yet heard from you regarding your renewed membership for 2018.

I know Aaron has told you this before. But I want you to hear it from me, too. You’re a critical part of Iowa Gun Owners’ winning team.

It’s because of you that not one gun control bill has passed into law here in Iowa since IGO’s formation.

It’s because of you that all of the political “experts” here in Iowa are still as shocked as ever at the results we saw pour in on election night in 2016.

And it’s because of you that Iowa passed Stand-Your-Ground law last year.

I can’t bear to see you walk away now — not with everything Second Amendment supporters are facing in 2018.

Not when we could be on the precipice of even more major victories.

Not when we have the opportunity to finally tell the national Gun Control Lobby they’re NOT WELCOME in Iowa!

So won’t you please agree to a generous contribution of $75 to renew your membership in Iowa Gun Owners right away?

Aaron tells me if you sign up with a silver membership ($75)or higher, he’ll rush you a special IGO member T-shirt and IGO decals right away!

Of course, whatever amount you choose to renew at is up to you. Just please be as generous as you can, and renew your membership for 2018 right away.

P.S. If you’ve already renewed your membership in Iowa Gun Owners for 2018, thank you so much!

But if you haven’t yet done so, please know your renewed membership is critically important. Iowa Gun Owners members like you are KEY to protecting and advancing our Second Amendment rights here in Iowa.

So please renew your membership RIGHT AWAY!

If you can join for $75 or more, make sure you indicate what size T-Shirt you want, and my friends at Iowa Gun Owners will mail one to you right away!

Help Me Pass Constitutional Carry in 2018!